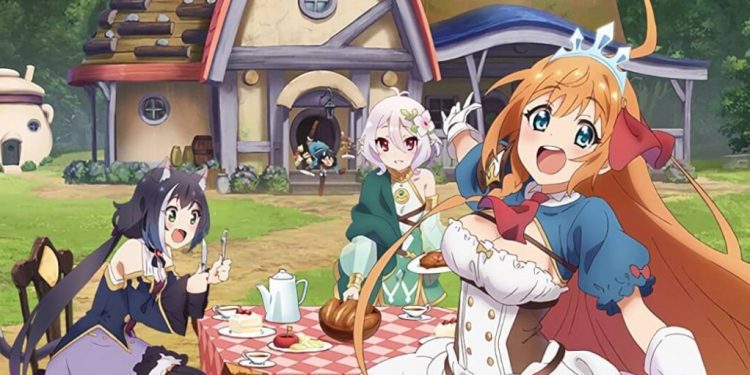 The adventure of Yuki and others begins in the Gourmet Guild. Yuki created Gourmet Edifice will the help of Pecorine, Kokkoro, and Karyl. They decided to explore Landsol and accept quests that have to deal with food. Pecorine became the Guild Master. Yuuki was once a member of Twinkle Wish, but after the world changed, he lost his memories and acquired the Gourmet Edifice guild. After losing his memories, he regressed to a simpler mental state. He became kind-hearted and brave, possessing a mysterious power to empower his allies with power. In reality, Yuuki is familiar with the girls of Princess Connect! Re: Dive.

Pecorine is a lady who loves eating, and she is always hungry and eats large quantities of food. She helps everyone in need and is well-known as a cheerful and kind princess of a country that developed Legends of Astrum. She realizes that Yuuki treats her like everyone even though she is a  princess. But she told everyone her nickname since she feels sensitive in revealing her real name. Kokkoro is an Elf-Race girl assigned by Ameth to care for Yuuki and addresses him as her Lord. Kokkoro enjoys the adventure in Landsol with Yuuki.

Yuuki became the first guy to befriend Kokkoro, who devoted her life to Yuuki and in Legends of Astrum. Karyl is a Cat Beast-Race girl assigned by Mana Senri to kill Pecorine. But Karyl fails to kill Pecorine and likes getting closer to  Yuuki, Pecorine, and Kokkoro. They made her a Gourmet Edifice member and a Mana Senri’s Princess Knight after receiving a small power of one of the Seven Crowns. Sheffy is a Dragon-Race girl who loses her memory simultaneously as Yuuki.

She became a junior Figure Skating champion in real life and plays Legend of Astrum. One day Sheffy regains her memories and joins Gourmet Edifice. Yui created a guild called Twinkle Wish with the help of  Hiyori, and Rei and they helped the people of Landsol intending to reach the top of Sol Tower. Hiyori continues as the Guild Master. Yui is a human lady who was a part of Legends of Astrum alone and suggested creating a party of adventurers. She met with Hiyori and discovered Twinkle Wish, and she possesses healing magic. Yui attends the same class as Yuuki, and they know each other from middle school.

But she has a crush on him, and they also join the Legends of Astrum. Rei is a Fiend-Race with a cool personality and finds it hard to trust outsiders of her guildmates. They keep on leaving her behind when they go on the adventure, and she keeps on scolding them for that. Yuuki is tied to the Labyrinth, and its members help him. Labyrista became the Guild Master. One day the Twinkle Wish guild ascends the Tower of Sol after the events of Princess Connect but encounters Mana Senri, who fuses with Minerva.

Princess Connect! Re: Dive Season 2 Episode 1 will be released on 11 January 2022. Yuuki gets wounded after wiping out Hiyori and Rei.  He protected Yui before Mana’s attack engulfed her. Yuuki wakes up in mysterious and meets Ameth, who seems to know him. The guild decided to pursue their goals after they assembled. Let’s look at Princess Connect! Re: Dive Season 2 Episode 1 official details and other latest anime updates.