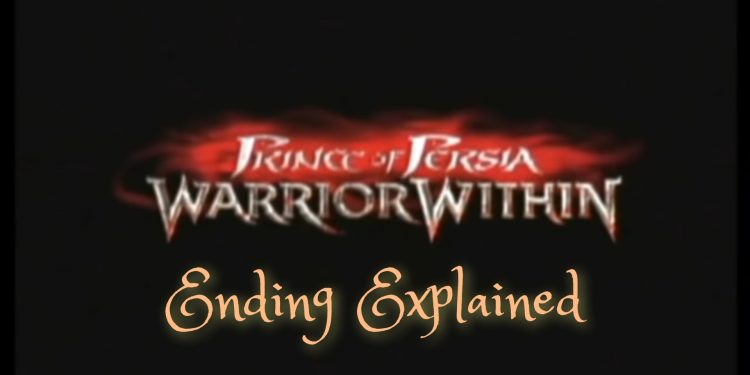 Prince of Persia: Warrior Within is a sequel to the Prince of Persia: The Sands of Time. The game continues to tell us the story of the Prince from the Sands of Time with new features added to the game and new options in combat. The new game gives the Prince ability to wield two weapons at a time and now can steal his enemies’ weapons and throw them. New abilities include the Prince dispatching his enemies with various gory finishing moves. Warrior Within, when compared to its predecessor, has a darker tone. Let us look at Prince of Persia Warrior Within Ending Explained, where we will be going through multiple endings of the game and how you can get or prevent those ending.

The abilities from the Sands of time, such as slow-down and speed-up powers, have returned, including a new power, in which the Prince can create a circular “wave” of sand that damages and knocks down all surrounding enemies. Like its predecessor, the warrior within was able to get good reception from the critiques, especially for the improved combat, level design, story, and soundtrack. Following the game’s success, the game also gets a second sequel and a prequel titled Prince of Persia: The Two Thrones and Prince of Persia: The Forgotten Sands, respectively.

Warrior Within was first released for GameCube, Microsoft Windows, PlayStation 2, and Xbox. The game was ported to the Playstation Portable with a new name Prince of Persia: Revelations. In this port, the game comes with additional contents such as new areas which were not available in the original release. The game was also ported to iPhone, but it was soon pulled from the App Store due to problems with the in-game menu.

Prince of Persia Warrior Within Plot

As we have mentioned before, the game’s story takes place after the events from Sands of Time. We are now taken seven years after the events of Prince of Persia: The Sands of Time, where we find the Prince being constantly hunted by a mysterious creature known as the Dahaka. As it’s getting stronger, the Prince decides to seek counsel and visits a wise old man.

The wise old man explains that whoever releases The Sands of Time must die. Since the Prince could escape this fate, it is Dahaka’s mission as guardian of the timeline to ensure that he dies according to fate. The old man further tells the Prince that there is also the Island of Time, where the Empress of Time was the one to create the Sands.

After hearing all this, the Prince sets off to the Island to prevent the Sands from ever being created, which he believes can stop the acts of Dahaka. But the journey to the Island of time was not easy as the Prince had to battle against an enemy force led by a mysterious woman in black and capsizes the Prince’s ship. The Prince couldn’t win against the woman and got washes ashore, unconscious, onto the Island of Time.

Unable to grant the Prince an audience with the Empress of Time, Kaileena tells him the method to unlock the door to the throne room where the Empress resides. The Prince makes his way through the fortress while using the sand portals to travel between the past and present while escaping several encounters with the Dahaka. Meanwhile, the Prince discovers that the Dahaka cannot pass through water.

Also read: Prince of Persia: Does Kaileena End Up with Prince?

He reaches the throne room to discover that Kaileena is the Empress of Time herself, who has foreseen in the timeline that the Prince will kill her. To prevent this, she decided to attempt to defy her fate, just as the Prince is doing. A battle takes place between the Prince and Kaileena where the Prince emerges victorious, where he kills Kaileena and returns to the present.

When the Prince was leading a life believing he had changed his fate, he again encountered the Dahaka forces. He soon realizes the shocking truth; by killing Kaileena, he becomes the one who created the Sands of Time. The sands were created after her death and were flown into the hourglass. After realizing all the truth, the Prince falls into despair.

But suddenly, a glimmer of hope comes to the Prince when he learns about the magical artefact called the Mask of the Wraith. This mystical item can transport the wearer into the past, allowing him to alter his timeline by safely coexisting with his other self. The Prince dons the Mask, which transforms him into the Sand Wraith, an entity that constantly ebbs away life, and gets back to the point when he first arrived on the Island of Time.

He formulates a plan to force Kaileena through a sand portal with him, which can transport both of them into the present. Thus, he was able to create two versions of himself, the one where Dahaka apprehends and destroys and the one the players are playing. This act loosens the Mask of the Wraith’s grip from the Prince’s face. He removes the mash and returns to his normal form.

The Prince continues to the throne room, even though he could please Kaileena, a battle with her begins as before. He forces her into the present with him, and at this point, the game gets to two paths based on the player’s decision. The ending is based upon the player’s all life upgrades and the collection of the special primary weapon called the Water Sword.

The game’s ending is fully dependent upon the choices and achievements made by the players throughout the game. Based on that, the game has two endings:

First ending: if the players don’t have the Water Sword

In this ending, when the fight takes place, the Prince fights and kills Kaileena in the present. The Dahaka arrives to claim her body and Farah’s amulet from the Prince. Thus, the Sands of Time and its relics are removed from the timeline. This makes the Prince sail home to Babylon alone and discover that his city is being ravaged by war. He soon hears the wise old man’s voice, stating his journey will not end well, and he cannot change his fate. The Prince speaks out in utter dismay, saying, what has he done?

The second ending, with the Water Sword

During the journey, they both end up making love, where a dream enters the mind of the Prince. In the dream, he sees his city being burned and a gold crown rolling to the feet of a mysterious, shadowy figure. The figure ominously claims everything that the Prince owns becomes his rightfully. Then similar to the first ending, he hears the old wise man’s voice stating his journey will not end well and cannot change his fate. This ending is the continuity to the sequel Prince of Persia: The Two Thrones.