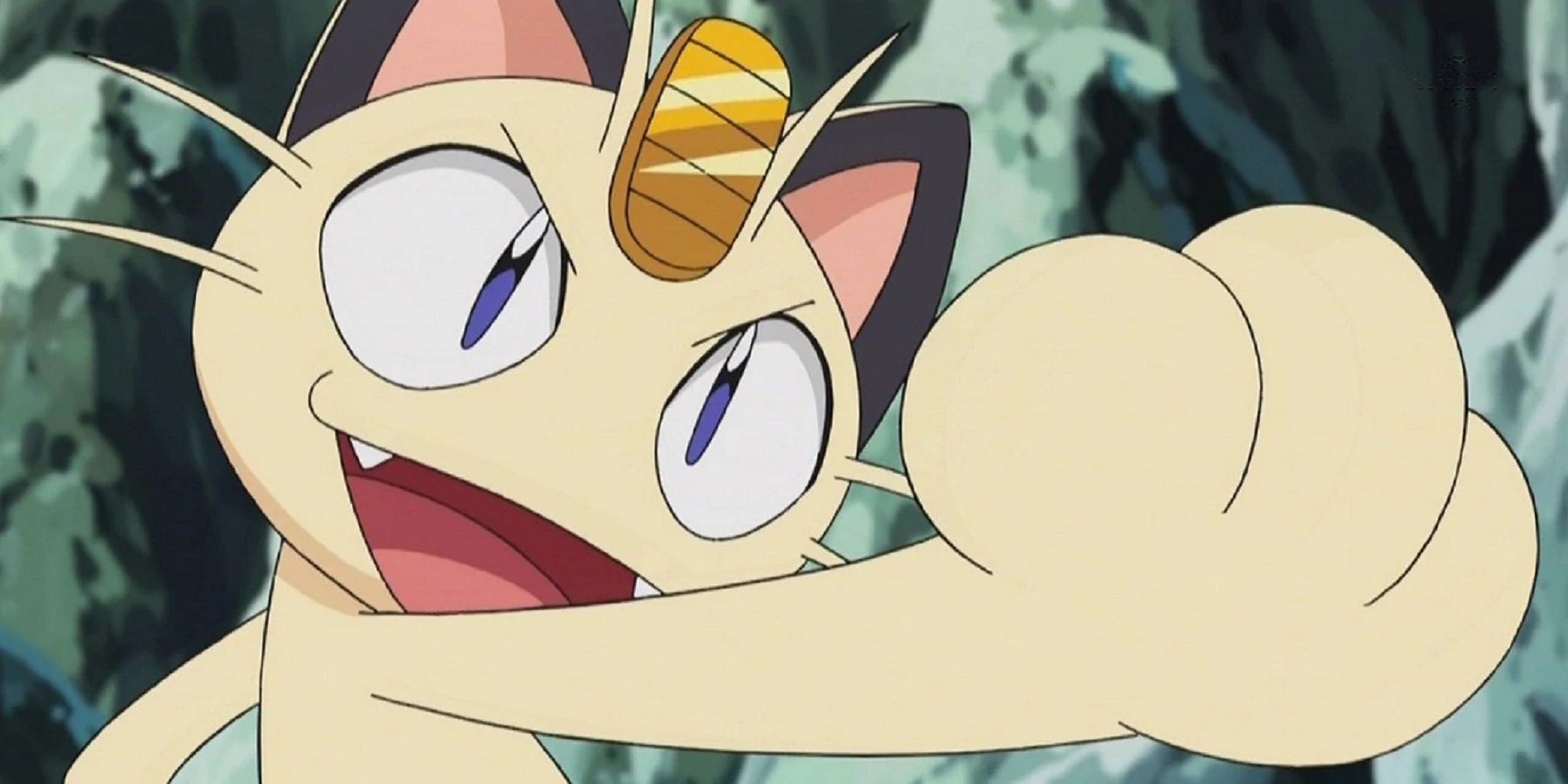 Popular Anime Cats are one of the strongest characters in anime, and most of them are masters of young students who become a hero. Some animes have popular cats as the main character, but only a few exist. We will look at popular anime cats from different popular anime like One Piece, Shaman King, and other anime with popular cats. This is interesting since most popular anime cats are strong and play an important role in anime. Sometimes when watching an anime, we forget that there are stronger animals like cats since most of them act like humans.

Characters like poplar cats make many popular animes to be interesting, and this draws the attention of anime fans. Looking at the list of popular anime cats below, we remind many of us about the animes that have ended or are ongoing, which we might have forgotten since the anime world is growing quickly with much fan-favorite anime. It has become difficult to look at popular animes with popular cats since there are tons of them, but we will discuss the best anime with popular cats you might want to watch.

Most anime fans focus on the main characters or heroes and forget about other things that make anime interesting. However, a character like popular cats and other non-human creatures makes anime enjoyable, and humans learn much in such a series with animals like cats. If you remember a popular cat-like Matamune, you will know what to expect in the list below; this was one of the most interesting and popular cats that anime fans always wanted to watch, even though Matamune ended up a spirit that helped a young hero. We will explain a lot about cats like Matamune and which anime they are from below.

Blair is a Cat witch and was once mistaken for a genuine Witch by Maka Albam and Soul Eater. Later, she would reside at Maka and Soul Apartment, where she worked as an employee. She would also work alongside the DWMA, Maka, and Soul on their various quests. She is also a very understanding person, and she has shown kindness to those in trouble. 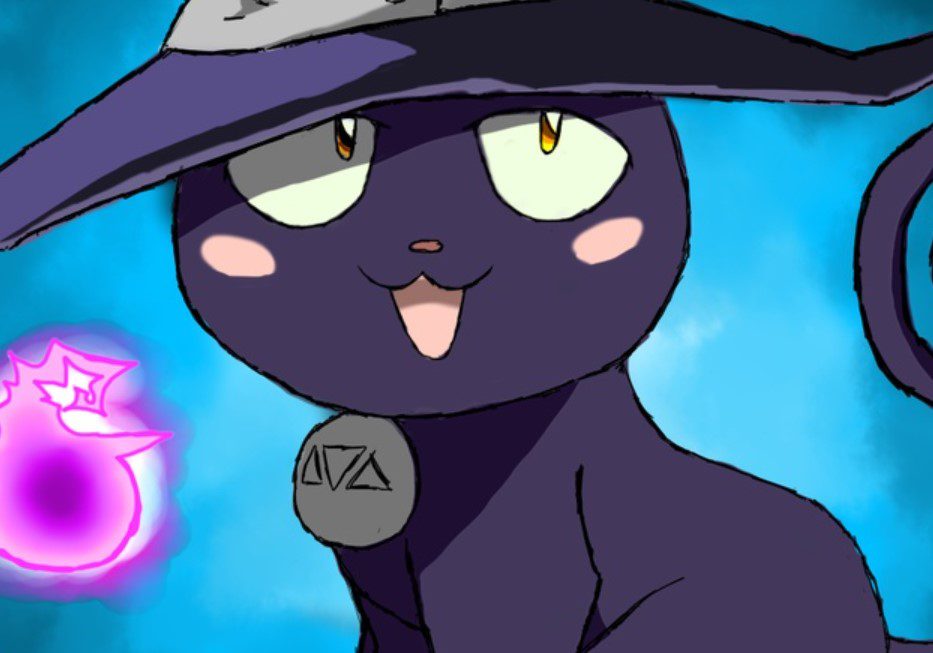 Even though she is a cat, her character is not mean at all, and she can act overly friendly to Soul. Most time, she would go looking for some fun, even if it might be dangerous or not. She is also playful, loves to have fun, and occasionally flirts with Soul by appearing out of her cat form with little to no clothing.

Kuro is a black cat with two tails, something that is considered to be sacred even in ancient Japan. The lower half of his face is covered with chocolate brown fur, which slopes upwards between his eyes, while his chest fur is white. There is also a ring of white fur on his upper right leg, and he has large green eyes with the pale green sclera and small horns on his head. When he goes into his rage mode in nekomata form, he becomes huge and easily towers over adult humans. 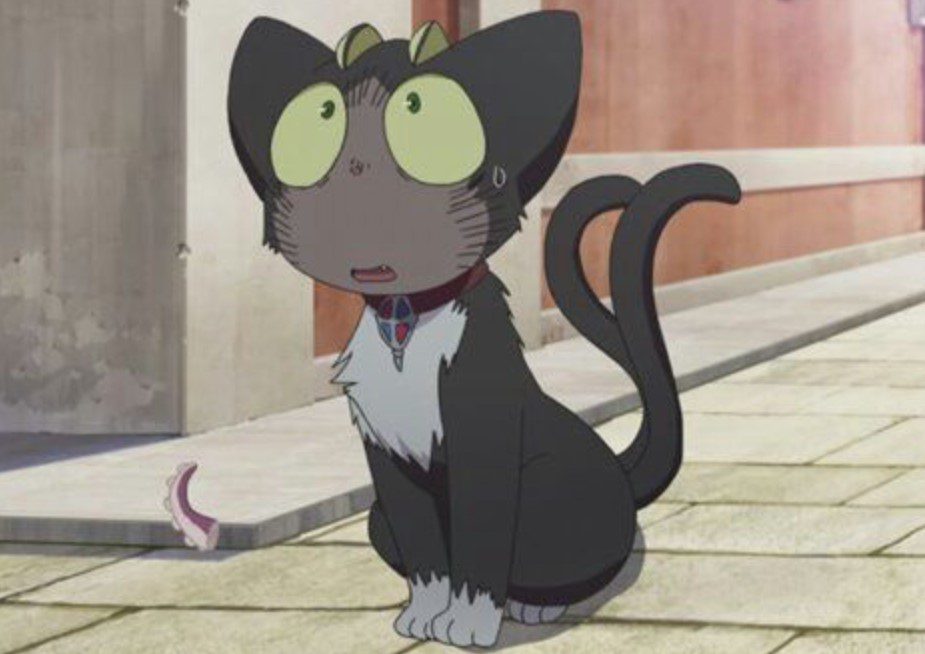 Kuro’s personality as a cat is very playful and energetic as well. He is constantly seen around Rin, asking to play with him. But he has a fierce side, as we had seen when he attacked humans bulldozing his shrine. He likes Shiro’s catnip whine and generally sleeps on Rin’s back. He does not like being alone, and he is seen shedding tears when he comes to accept Shiro’s death.

Also Read: Most Popular Must Watch Romance Anime in 2022

Shamisen: The Melancholy of Haruhi Suzumiya 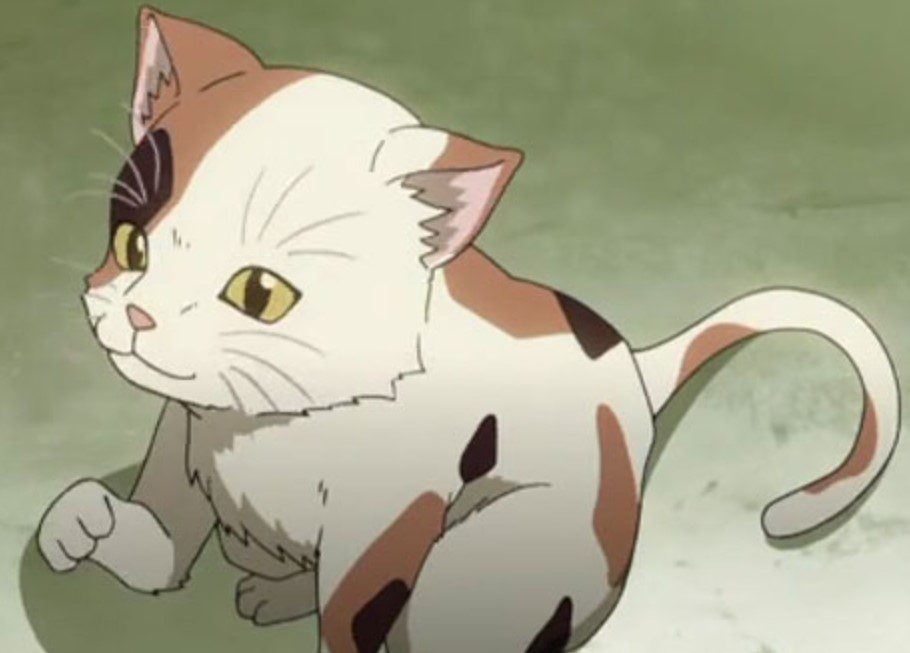 From this incident forward, Haruhi then decided to name the cat Shamisen and then later, it was nicknamed Shami by Kyon’s sister. Things changed a bit when Haruhi started to confuse the fictional world with reality. So Shamisen started to talk in a deep baritone voice, and the Brigate was forced to keep this from Haruhi. So Kyon had a conversation with Shamisen where Shanmisen’s comments were almost moralistic and philosophical.

Matamune is a cat spirit with two tails created by Asakura Hao. This is one of the popular cats in Shaman King. We have seen how Matamune played an important role in Asakura Yoh’s life, helping Yoh master skills to defeat Asakura Hao. Matamune is like a ninja cat with yellow color, and he passed a necklace with three bear claws to Asakura Yoh. He has been working under the Asakura family for thousand years. 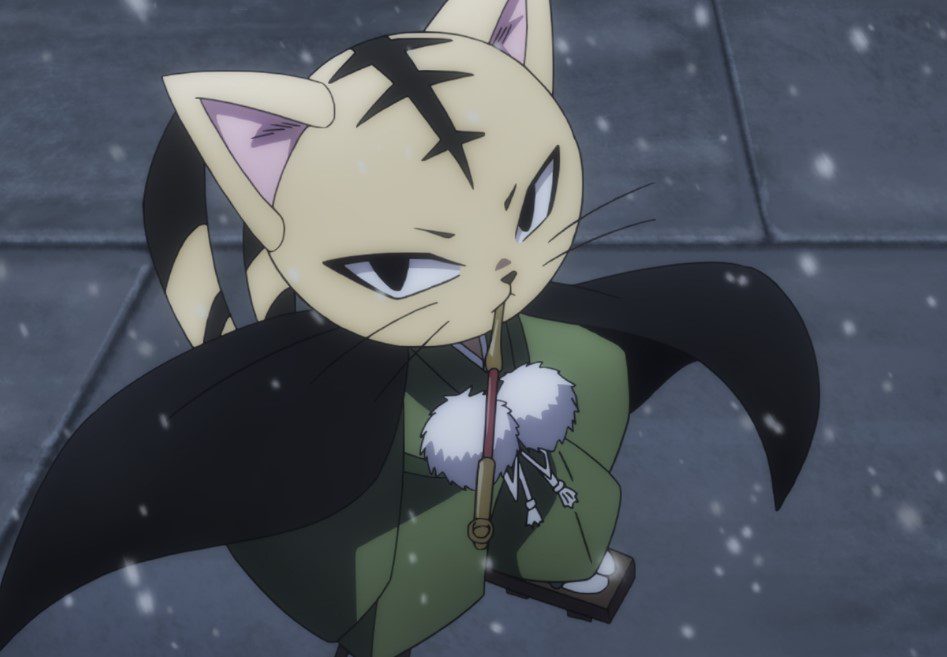 But he spent most of his time exploring the world. Matamune has many different powers, and he once fused with Yoh’s blade when they fought to protect Yoh’s future wife. We have many things to talk about this popular anime cat, Matamune; however, you can learn a lot about him by watching Shaman King.

Happy is a strong cat who joined the Fairy Tail Guild and became a member of Team Natsu. He is a blue cat with various skills and powers and can unleash wings from his back. Happy is one of the popular cats in this anime, and he plays an important role in various battles helping his team and friends, as seen in the different storylines of Fairy Tail. 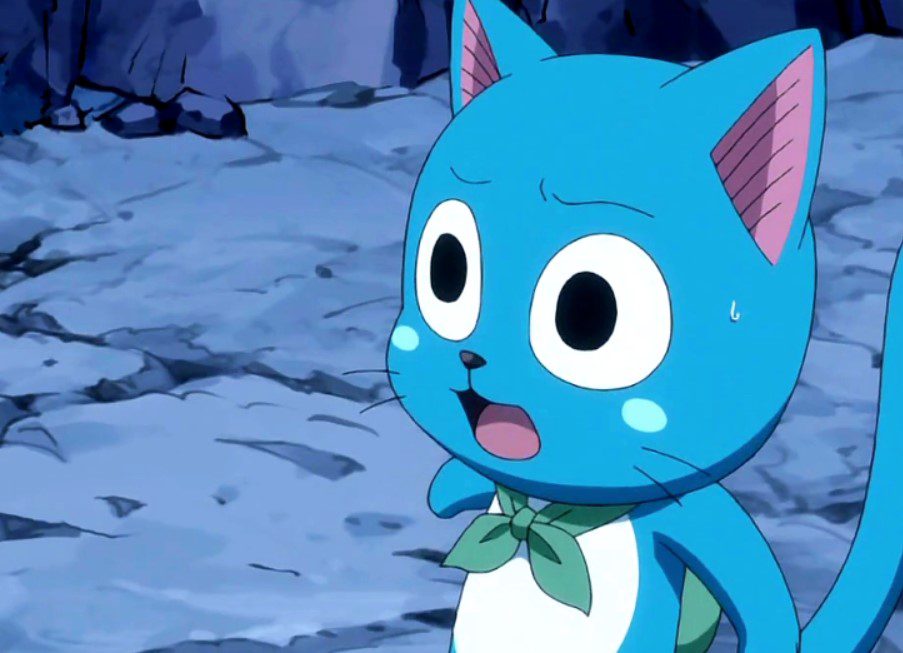 It is rare to find popular cats in anime like this one, but this is interesting to know about a popular cat from Fruits Basket. This reminds us of many things that happened in this anime. Most of us expect to find a popular cat in fighting or action anime, but the case is different here. Kyou is a human who can turn into an orange cat due to the cat spirit, and we have seen this in many scenes of this anime. But he was helped by Tohru since he becomes dangerous if he turns into his cat form. 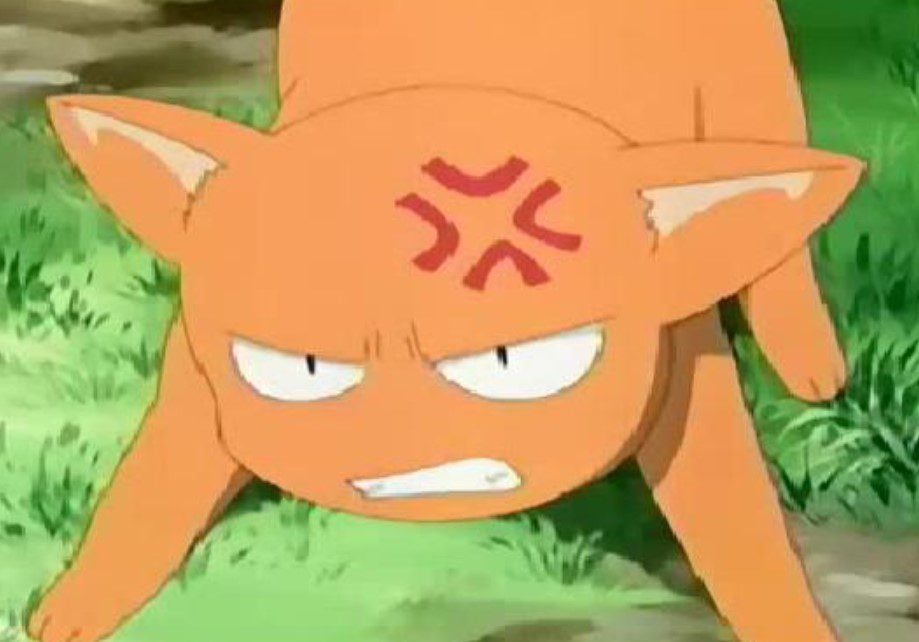 It is also interesting to learn about humans who can turn into cats. Kyou’s cat form was revealed in different scenes of this anime, but his necklace helped him suppress his cat’s instincts until Tohru saved him and broke the curse.

Korin is an immortal wise cat who is more than 800 years old and resides atop a giant tower. He is one of the best martial arts masters who helped Goku enhance his skills at a young age. Korin has become a legendary figure worldwide, and he earned the title “The God of Martial Arts.” But those who met with him for the first time couldn’t believe that a chubby cat is a legendary master. 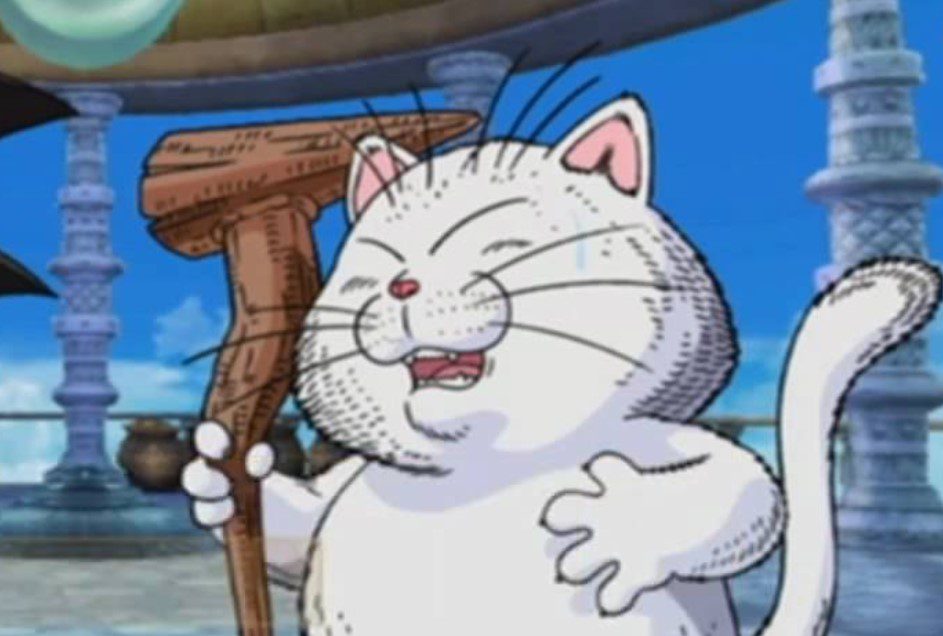 Goku was also surprised when he met with Korin, but Korin’s skills made Goku believe that he has met a legend. Korin is a legend from a mysterious world who was teleported to Earth to help the Kami of Earth. He also worked with y Mr. Popo, and the trio helped Goku become the strongest warrior he is now.

Kuroneko is a mysterious black cat with big eyes and appeared in both manga and anime of Trigun. She has been seen in amine stopping Wolfwood from cheating in a chess game; Kuroneko also replaces Vash during Hang Fire. She has become popular since she always helps Vash, and her nature makes her interesting to watch. 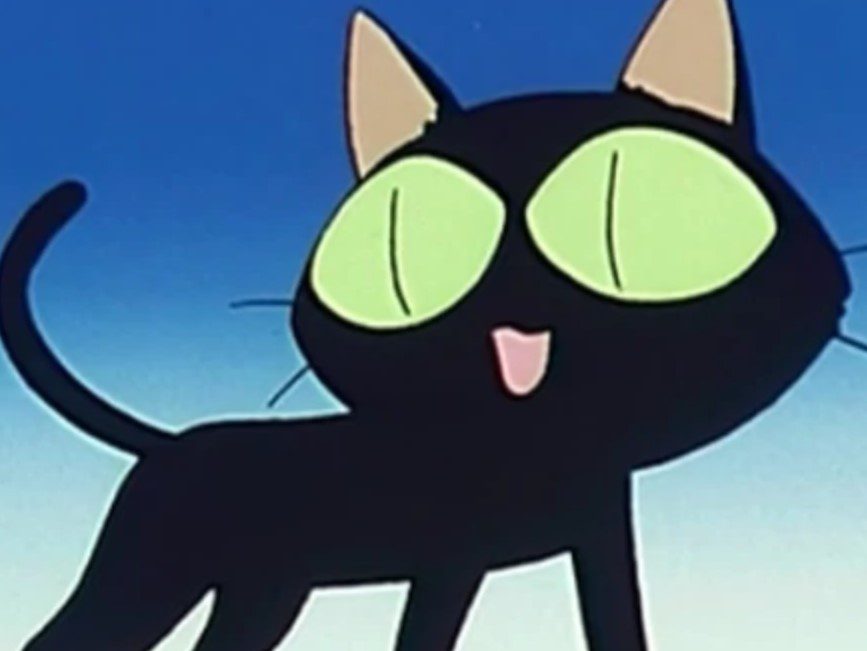 Puck is an Artificial Spirit cat created by Echidna and is commonly known as the Beast of the End. He is also the current Great Spirit of Fire. Puck played important roles in many arcs, and he has helped Emilia with her mental state. He is a silver-grey cat and became Emilia’s pet. Puck is one of the strongest popular cats in Re Zero. 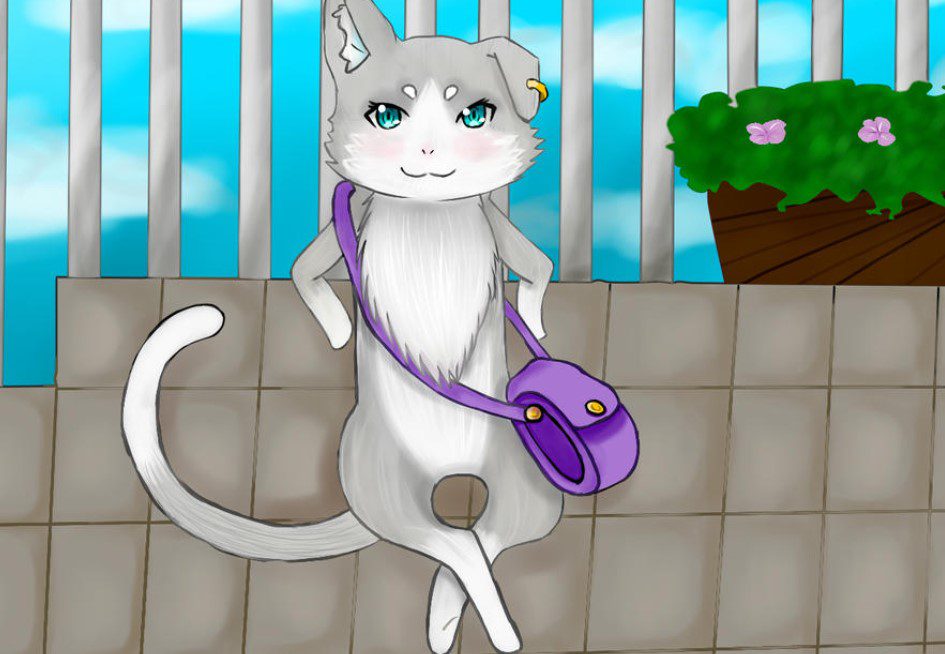 Meowth is a cat-type Pokemon member of Team Rocket. He has become a popular cat Pokemon due to his behavior in the Pokemon series. He and Team Rock are the Brat Boy’s rivals, which has made them popular and the best series since they are always after Pikachu and trying to steal other Pokemon, but they always lose to Goh and Satoshi. Meowth is fun to watch due to his tactics and funny joke about trying to be an evil villain of Team Rocket. 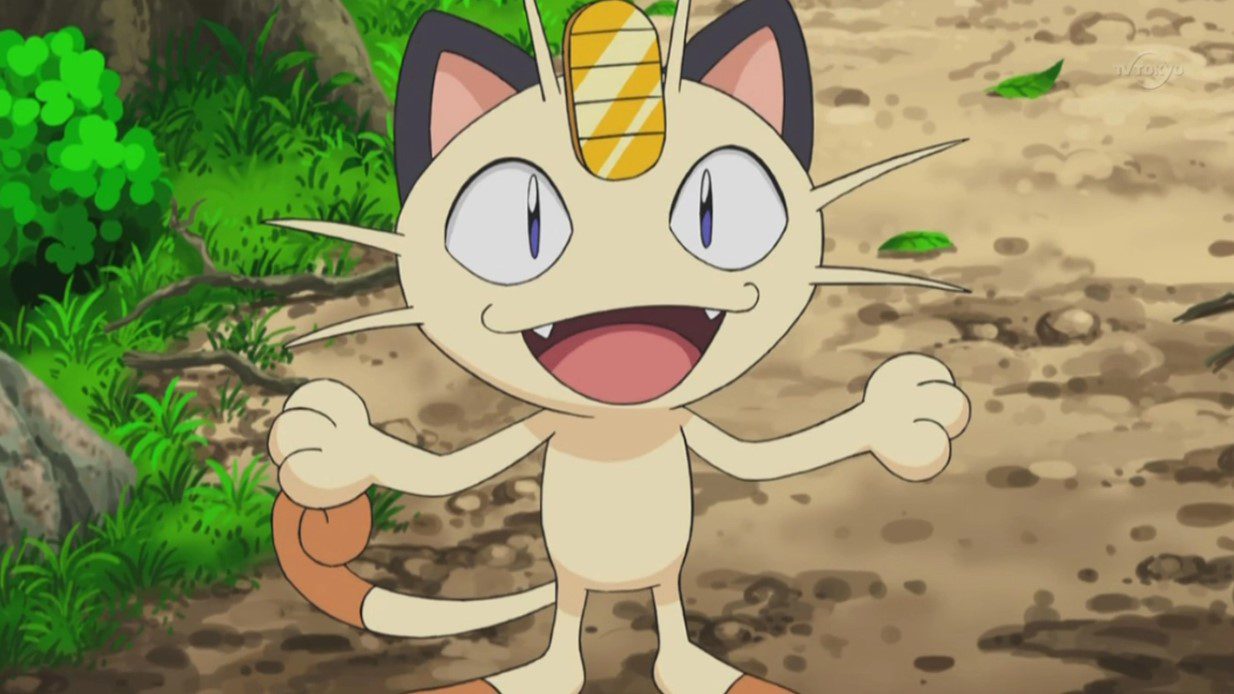 Also Read: Diabolik Lovers Characters That You Will Love To Gaze Upon