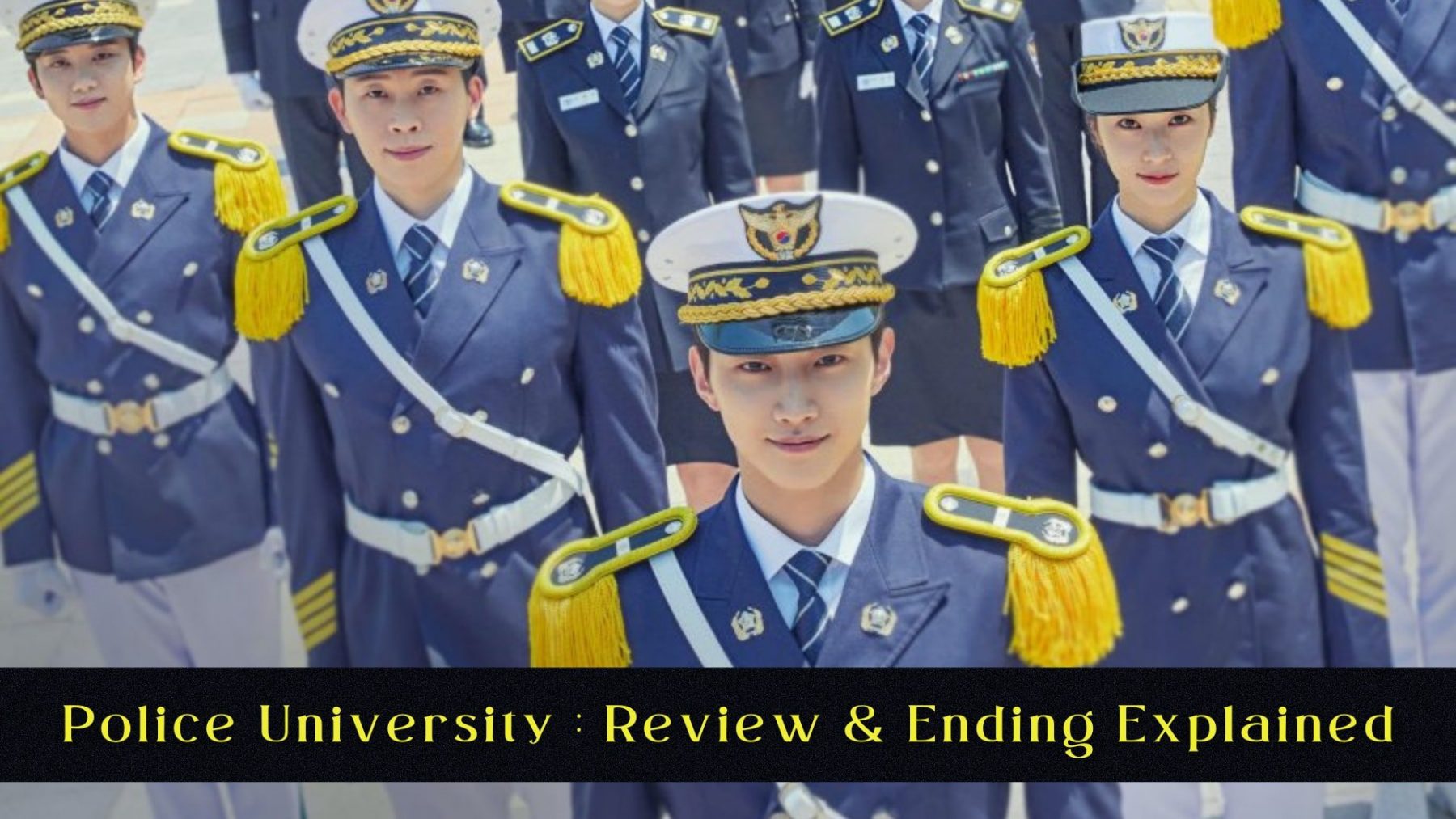 The crime-comedy Police University kdrama finally concluded on 5 October 2021. Seeing the last scene, it truly feels like we have traveled such a long journey with all cast members. Jinyoung, Cha Tae Hyun, Krystal, and all other leads have showcased excellent acting from the start till the end. It is one of the reasons viewers enjoyed and loved Police University. Yu Dong Man and Kang Sun Ho have shown superb teamwork, whether it be during the training period, on-the-site fight, or adorable bickering scenes. Even romance between Kang Sun Ho and Oh Kang Hee fluttered viewers’ hearts!

The South Korean drama Police University falls under crime, comedy, youth, and romance genres. It is written by Min Jung and directed by Yoo Kwan Moo, starring Jinyoung, Cha Tae Hyun, and Krystal. Episode 1 was released on 9 August 2021, and the kdrama concluded on 5 October 2021 with sixteen episodes. Even though the storyline gets draggy in the middle, many viewers still enjoy watching it mainly because of the leads. Police University is a story of students and professors from Korea National Police University (KNPU). They join hands to solve various cases while supporting, understanding, and protecting each other. It is a beautiful youth crime kdrama showing the journey of today’s youth towards their dreams while overcoming every challenge they face!

Police University is a South Korean youth crime romance drama revolving around Korean National Police University, including its students and professors. A crime detective officer Yu Dong Man becomes a professor at KNPU due to his restless and impulsive behavior. Kang Sun Ho, a brilliant student, joins KNPU to follow his heart Oh Kang Hee, who always dreams of becoming a police officer. However, Yu Dong Man and Kang Sun Ho have a long unavoidable history. Will the two be able to forget their shortcomings and work together? Or will Yu Dong Man create more trouble for Kang Sun Ho? 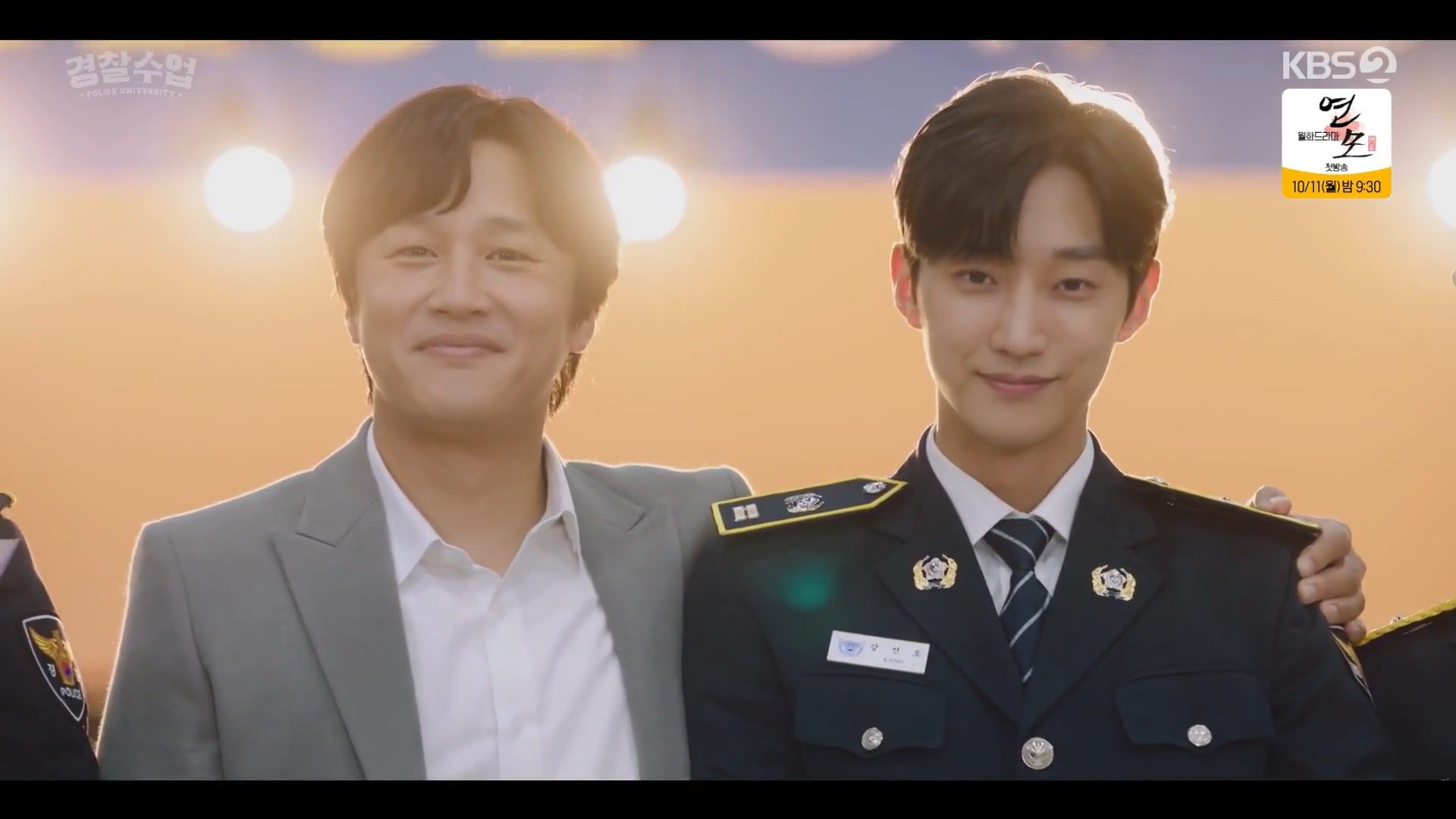 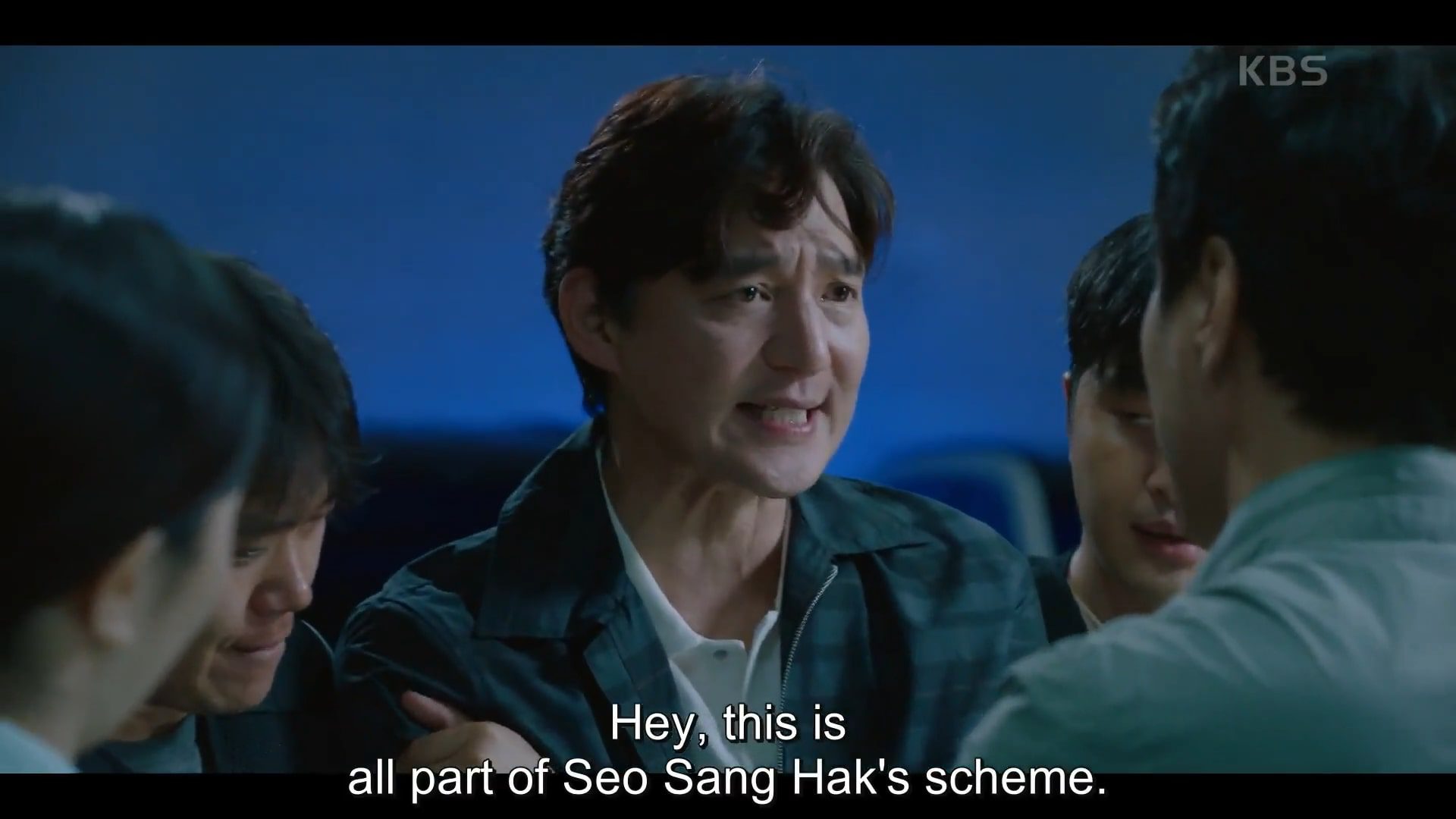 Ten years ago, Professor Seo, his son Seo Min Woo, and Professor Choi’s late husband Lee Ju Won established the Zelkova Tree Foundation in the interest of the police force. However, while catching a criminal, Min Woo got hurt, leading him to a coma state for the next ten years. Meanwhile, Lee Ju Won lost his life. Also, that criminal was no other than Professor Go Deok Bae. That devastation made Professor Seo take a step he should not have. Five years later, Professor Seo re-established the same foundation only to clean up the black money he gathered from the gambling sites. Even though his intention was good, the direction was not moral, which left him with nothing in the end. His son Min Woo, who has been in a coma for the last ten years, dies in Episode 15 of Police University kdrama.

After learning about Professor Seo’s case, Kang Sun Ho understands that he is no different. He also did the same thing in the past, stealing money from bad people to save good people. Professor Seo did it for his son and all police officers while Kang Sun Ho did for his father. However, he now knows no matter what reason or how desperate you are, the law will not change for you. A crime is a crime. Therefore, to make things right, Sun Ho decides to drop out. He leaves Police University but not before promising Kang Hee that he will be back. Sun Ho even confesses his crime to the police. However, due to lack of evidence, they could not arrest him. They understand his honesty. In exchange, Sun Ho helps them to take down all illegal gambling sites.

All Love Lines Get Happy Endings

Finally, in Police University kdrama Episode 16, All characters get their loved ones. Park Min Kyu and Yoon Na Rae get over their one side love, and it turns out they both fall for each other. Eventually, the two dates make everyone jealous with their open-love affection. Jo Joon Wook also prepares to confess his love to Lee Eon Joo. No Bum Tae helps him with this romantic proposal preparation. However, it turns out that Joon Wook gives up his love for his friendship leading to Bum Tae confessing his feelings to Eon Joo. It is a hilarious scene where Joon Wook tries to act cool but fails miserably, crying in front of Kang Hee. 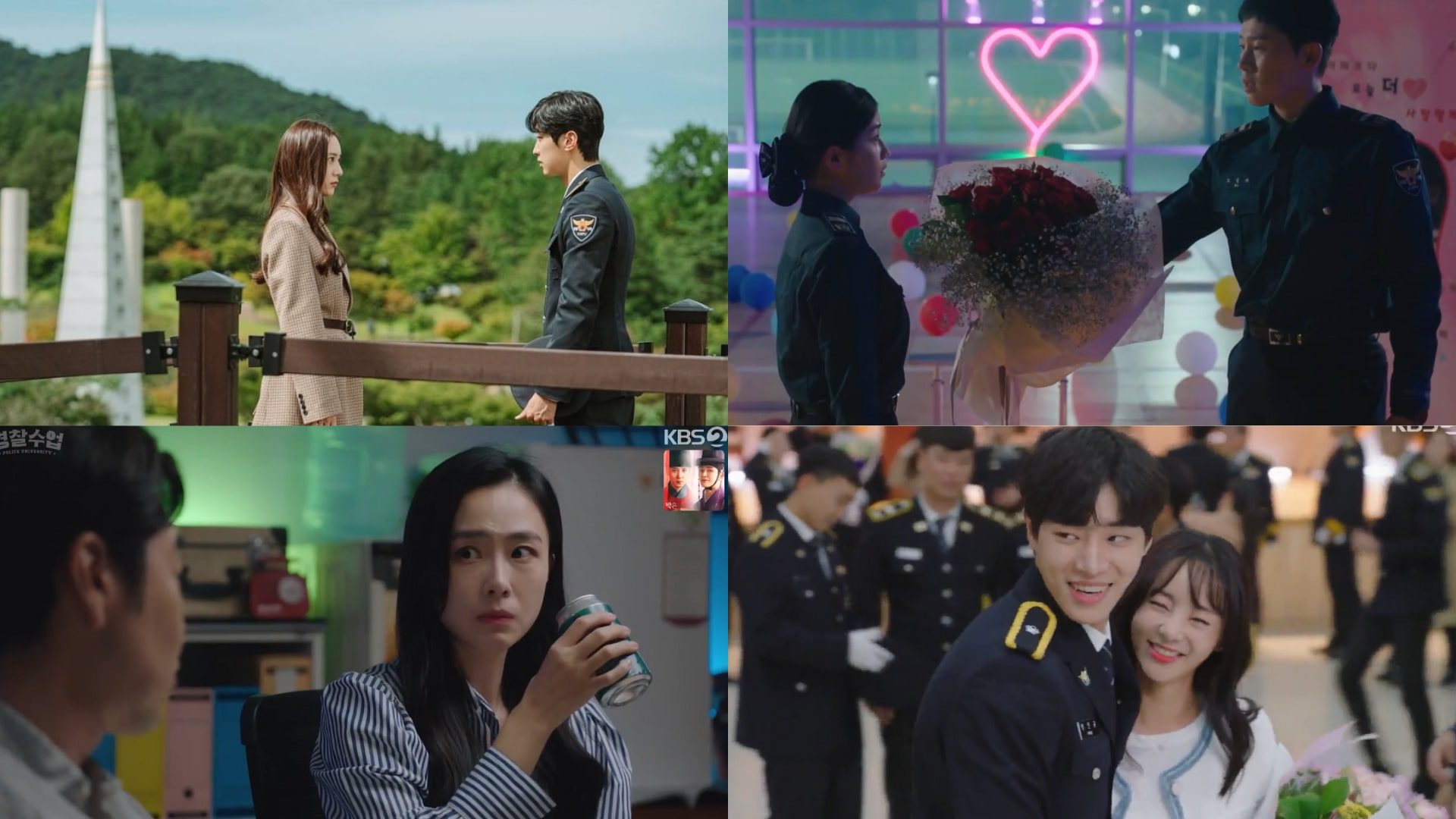 All couples from Police University

Episode 16 also shows an adorable indirect confession scene between Professor Kwon and Professor Choi. The two will make a good couple. Lastly, our main couple is Kang Sun Ho and Oh Kang Hee. Two years later, Kang Sun Ho returns as a new student because starting from the bottom is the only option to return to Police University. All of his friends and Kang Hee dance in glee after seeing him come back. Sun Ho and Kang Hee meet at the bridge where they parted away two years ago. However, this time they promise each other to stay together forever, sealing the promise with a sweet kiss.

Here comes the final moment of the 41 Batch graduation scene. Police University Episode 16 reveals their beautiful, memorable graduation scene. Sadly, Kang Sun Ho could not graduate with his mates and Kang Hee. Still, it is good to see Sun Ho together with the people who cherish him. Oh Kang Hee, Park Min Kyu, Jo Joon Wook, No Bum Tae, and Min Jae Kyung received their degrees. The scene made many viewers emotional, knowing each one of them has come so far after overcoming various obstacles. When everyone is present, how can Yu Dong Man miss it? He also comes to see his airhead students finally getting graduate. Thus, Police University kdrama ends with a beautiful, heart-warming picture of all characters dazzling in happiness and walking towards their dreams. 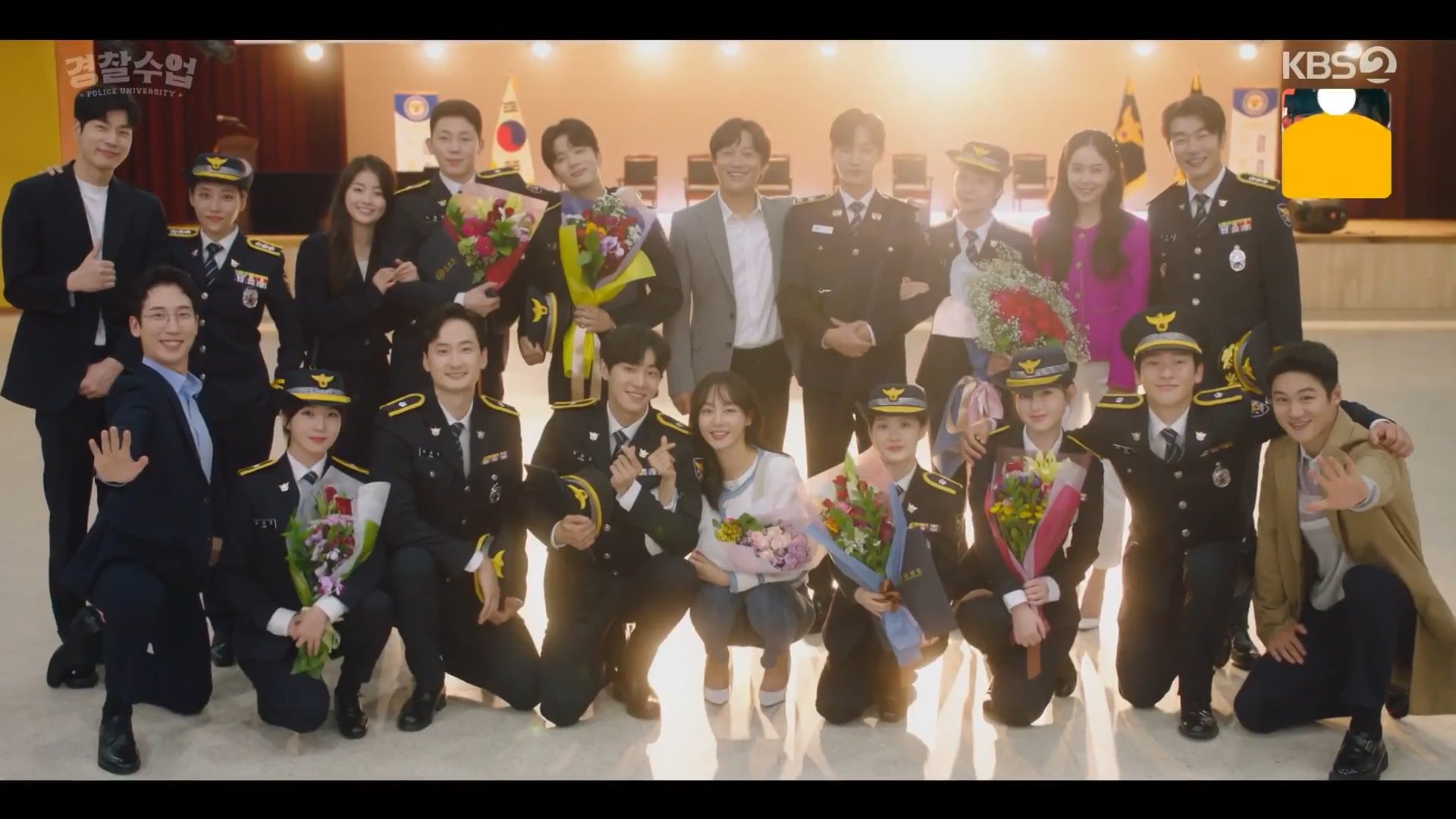 Police University Kdrama Review: Watch It Or Skip It?

Watch It
Many viewers rate Police University as a must-watch kdrama. Police University begins on a good and fresh start. However, as the story progresses, it seems the plot is stretched for no good. Indeed, the kdrama would have been much better with fewer episodes. From the middle to the ending, they extend the plotline so much. It would make you give up but, the cast acting saves the kdrama. Cha Tea Hyun, Jinyoung, and Krystal showcase outstanding remarkable performances throughout the drama, and it will make you stick to it till the end. Of course, comical parts and romance are reasons viewers enjoy Police University. So far, Police University reviews are good despite the overextended storyline. If you love watching decent crime, suspense with a full blast of comedy and romance dramas, Police University is your type of kdrama to enjoy!