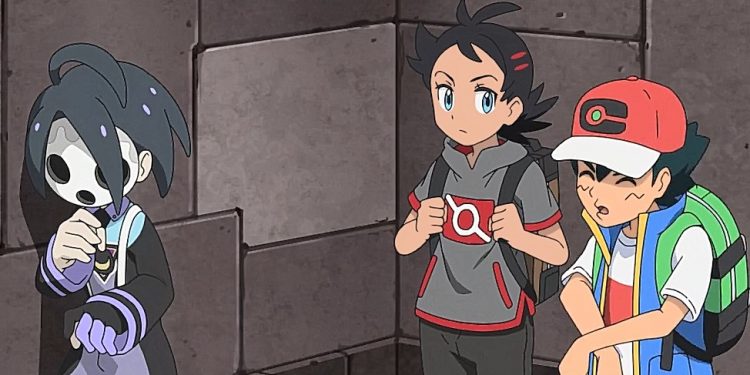 Pokemon 2019 Episode 93 returns soon after taking a two weeks break. Let’s look at the recent updates of the previous episode of this anime. In the previous episode of Pokemon, Goh, and Satoshi arrive at the Gallar region, but their plans change when they bump into the strange masked boy. Satoshi picked up something that the masked boy dropped, and they followed that boy to return his stuff. The two noticed that the boy had entered a foggy train and followed him. Goh and Satoshi learned that the training was heading to Lateral town.

That made them happy since they were going there to complete some adventure. But they learned that they were inside Ghost Train. They face countless scary things, and Goh is surprised when Satoshi is possessed by a dangerous Ghost called Murakuge and begins to scare them. He decided to help Satoshi, and they also visited the Ghost forest and met with that masked strange boy who let them in and revealed the mystery behind Ghost forest. The trio battle with Mirakuge and seal him on a stone. Goh and Satoshi return at the Sakuragi Institute.

In the Morning, Goh and Satoshi learn about Ganger Kyodaimax and wonder if their Ganger can evolve into Ganger Kyodaimax. Satoshi wonders how they can train Ganger, and Sakuragi realizes that he knows someone who can train Ganger. Sakuragi reveals the town they have to visit, and a guy named Mr. Onion will help the Ganger Kyodaimax training. The duo decided to leave the town and arrive at their destination in the afternoon. They arrive in a strange building that looks like a forest and wonder if Mr. Onion lives there. Goh took the Index Data and confirmed that they had arrived in the right place.

Satoshi called out Mr. Onion, heard a mysterious door opening, and noticed a mysterious masked guy coming out. The two realize that they have met with that boy inside the Ghost Train and realize that it is Mr. Onion. Mr. Onion welcomed them, but he was shy, and they entered the room where they had to train. Satoshi told Mr. Onion about Ganger and needed to turn his Ganger into Ganger Kyodaimax. Mr. Onion told Satoshi what he had to do, and Satoshi did that, but Ganger didn’t evolve.

Mr. Onion realizes that something is missing and tells Satoshi that Ganger needs to eat Dai Soup to turn into Ganger Kyodaimax. Satoshi thought they had that soup in the houses and could feed Ganger the Dai Soup and turn him into Ganger Kyodaimax. But Mr. Onion reveals that he doesn’t have that, but they can go and collect the ingredients at the Ghost forest. Satoshi wonders what they have to collect, and Mr. Onion reveals that they need Dai Mushroom and can find them in the forest.

The trio heads to the forest and arrives at the cemetery. They also met with Sato and her Pokemon. But Mr. Onion warns them to becare not to wake the Ghost Pokemon-Type, or they will curse them. Ganger helps Satoshi get Dai Mushroom, but it is not enough, and they travel the whole forest collecting more of Dai Mushroom. They also encounter other Pokemons who try to stop them, but Satoshi lures them away. In the evening, they finished collecting the Dai Mushroom and headed home. But they were chased by Ghost Pokemon Type and made it home.

Pokemon 2019 Episode 93 will be released on 14 January 2022. The Ghost Pokemon Type returns to the forest. Mr. Onion cooked the Dai Soup, and Satoshi fed Ganger. They trained Ganger, and then Satoshi helped Ganger evolve into Ganger Kyodaimax. Goh records everything to the Index Data, and Mr. Onion uses Ghost Train to send the two home. Let’s look at Pokemon 2019 Episode 93 official details.