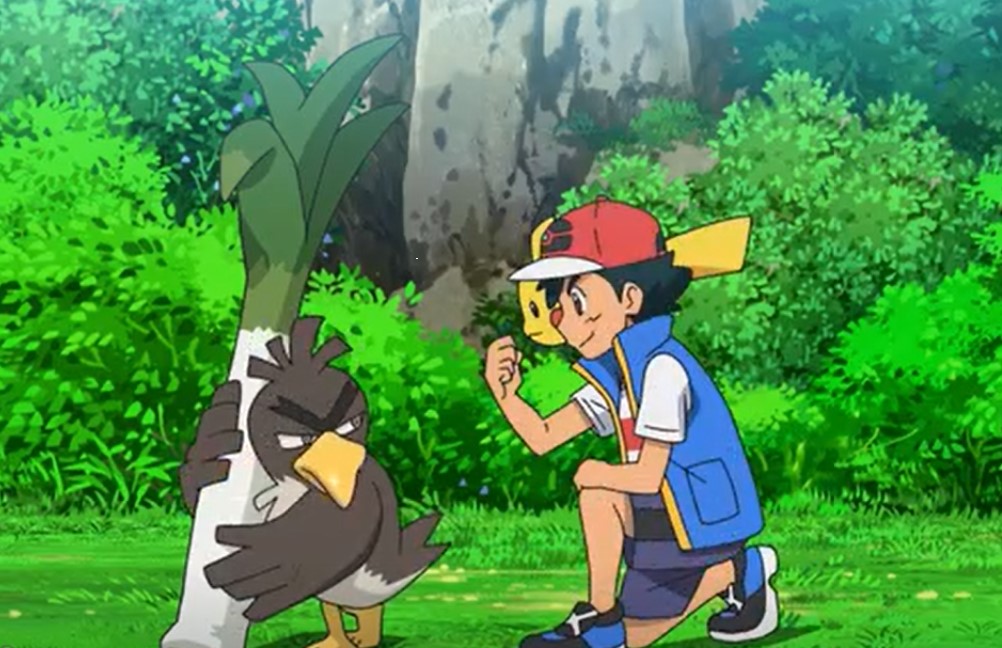 The Pokemon World Championship is about to begin; it is a trial to crown the greatest Pokemon battler. In the hopes of batling Dande, the current Supreme Monarch, Satoshi, participate in the Championships. Trainers all over from the world are taking part and battle each other in the class. The results of those battles determine their current ranking in the world.

Satoshi and Kamonegi has once met Rinto a trainer with an Earlade. They suffered a great loss from Rinto, and Satoshi hones Kamonegi’s skill by training with Gampi of the Kalos Elite Four. Santoshi and other trainers were told that a knight fights to protect their precious lord, the weak, and the powerless. The ones who truly treasure and protect others, their power grows rapidly. The training made Kamonegi and Satoshi form a strong bond. Satoshi is currently ranked 273, which places him in the Super Class.

After his training inside the dungeon with Mr. Gampi, Satoshi vowed that he would never lose a battle again. Mr. Gampi has taught him all the fighting tactics and how he can win the battle when he is about to lose. Satoshi heads back with his Pokemon to explore new adventures. He hopes that one day he will meet with Rinto and Earlade to show them the fruits of his training.

In the morning, Satoshi clashes with Goh using Kamonegi. Goh is using Hassam, who unleashes Scissor Cross. Satoshi told Kamonegi to keep a distance and use a Detect to block the attack. Kamonegi also fires a Crossroad Kill that pushes Hassam backward. Both Pokemon were tired, and they call it a draw. Satoshi and Goh are glad to see a lot of improvement in their Pokemons. 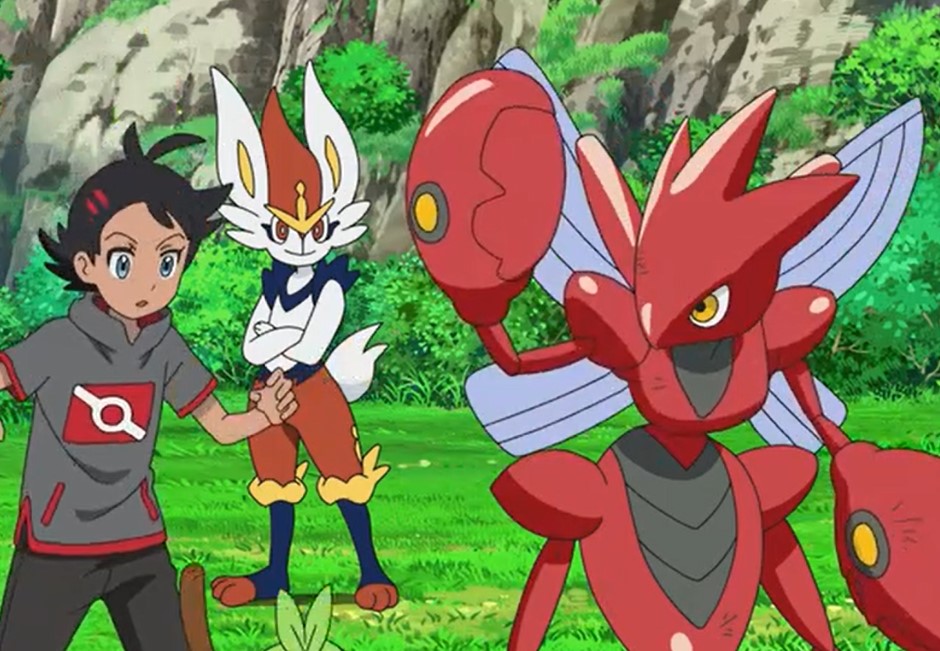 They discovered that it is Madatsubomi Flower Pokemon grass and poison type. It prefers hot and humid environments. It moves very quickly when capturing prey with its vines. Satoshi notice that the Madatsubomi is worn out. Sarunori uses his powers to help Madatsubomi. Sarunori signals Goh to capture Madatsubomi since they are now friends. Goh unleashes his monster ball and captures Madatsubomi. Madatsubomi data is addet to the inndex.

They arrive at the center, and Kamonegi, along with Hassam’s health, got revived. Suddenly Satoshi receives an official battle announcement. He can’t believe that it is that guy who has recently defeated him in their last battle. Satoshi and Kamonegi want to get their revenge. They step forward and greet Rinto along with his Pokemon. Goh asks Rinto if he is participating in the Championships. Rinto said yes and reveals that he is in a Super Class. Satoshi asks Rinto to battle him. 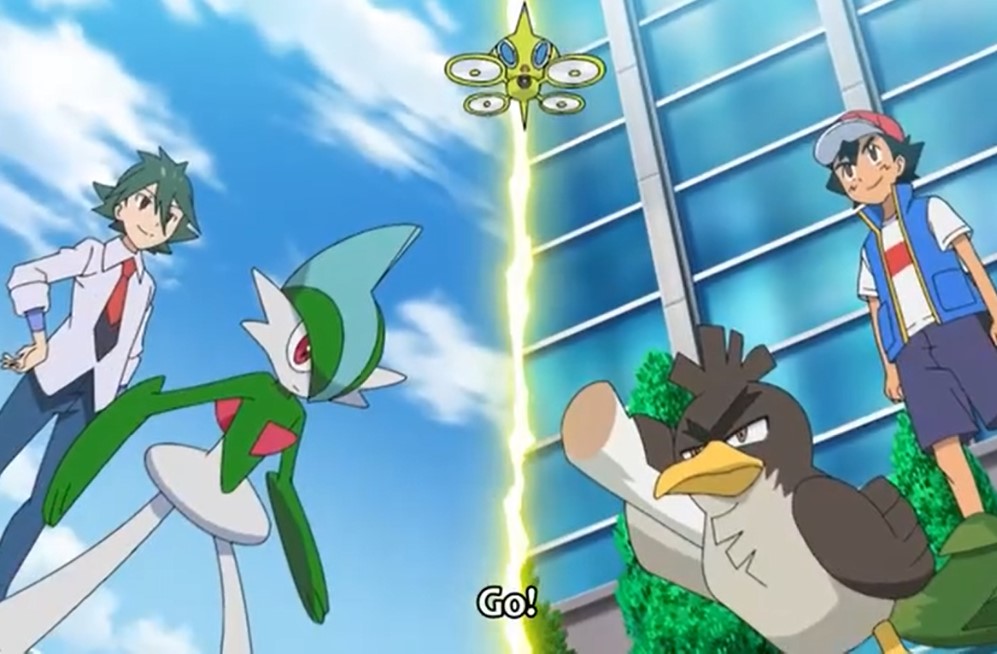 Rinto accepted Satoshi’s offer, and Satoshi said that it would be a different battle. The announcer approves that battle. He reveals that the World Championships have approved this Super Class battle between Super Class battlers. The battle will be a 1v1, and the battlers are asked to summon their Pokemon at the same time. Rinto summons Earlade and Goh summons Kamonegi. The battle is filled with excitement and powerful blows. Satoshi told Kamonegi to aim to become a Leek Master.

Kamonegi landed the first blow, but Earlade manages to survive that. Earlade attacks back with a Crossroad Kill and Kamonegi uses a Detect. The attacks cancel each other, and Earlade unleashes a Psycho Cutter. Goh notices that Satoshi and Kamonegi have improved. But Rinto and Earlade are one step ahead of them.

They have changed their tactics and went straight for a counterattack. Kmonegi rushes in, but he receives massive blows of uppercuts. Earlade uses Feint to cut Kamonegi’s weapon. Goh realizes that Earlade knows Feint, and he will keep on breaking through Kamonegi’s Detect move. Rinto asks Santoshi if he is giving up or has lost the will to fight.

Satoshi smiles after remembering his training with Mr. Gampi. He told Kamonegi that he can still use that weapon. Kamonegi’s confidence is back, and he picks up his weapon back. He blocks the Psycho Cutter coming from Earlade. Kamonegi evolves during the battle and becomes the Negigaknight Spot-Billed Duck Pokemon. He landed a Crossroad Kill that put Earlade to sleep. Satoshi is announced as the winner of the Super Class Battle.

Pokemon 2019 Episode 61 date will release on Friday, 9 April 2021, at 6:55 PM JST. You can watch new episodes of Pokemon 2019 online on Netflix. Find out who will Satoshi and Goh face in their next battle on the preview below.