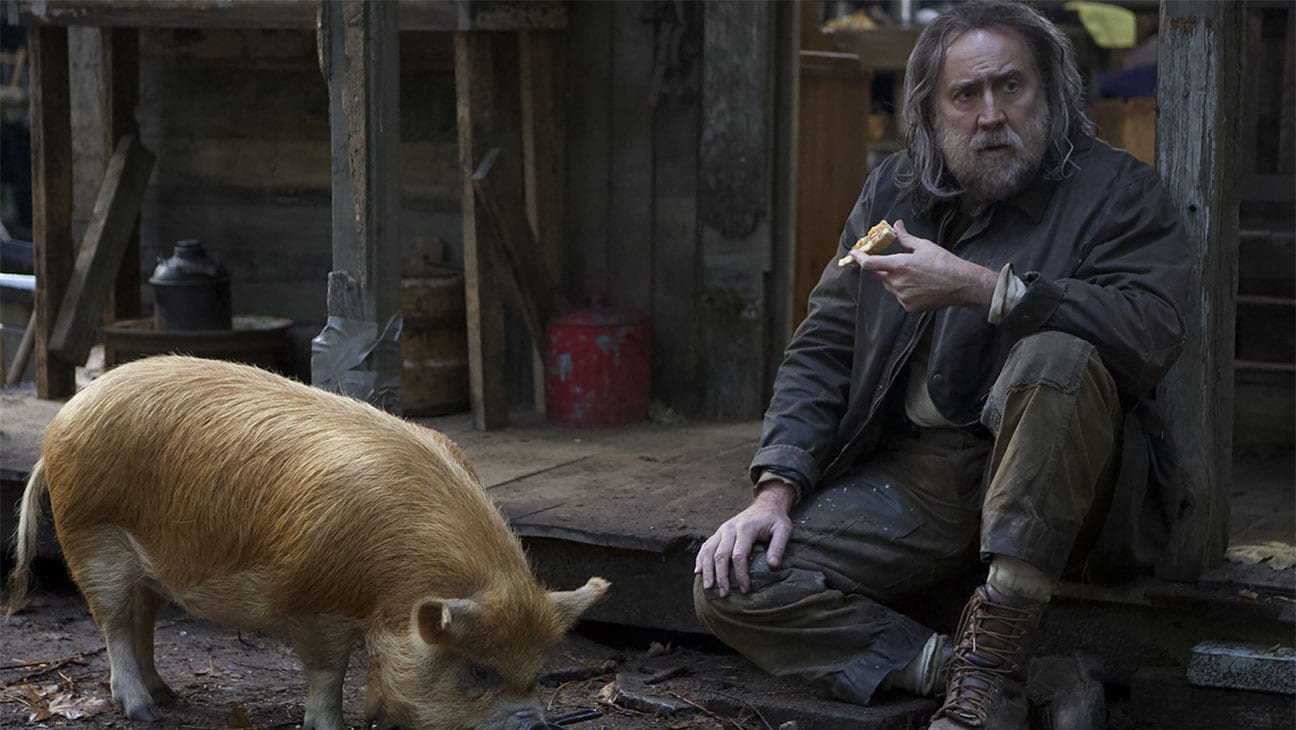 Pig is a 2021 Nicholas Cage movie that brings yet another dose of the actor’s maniacal energy to the big screen. However, the film is a subversion of expectations as it swerves from the usual course of Cage mania. Pig Movie is instead a meditative piece of a revenge flick. Expectations get subverted at every other turn in the movie. Helmed by Michael Sarnoski, the film has received accolades from critics. It marks yet another entry in Nicholas Cage’s return-to-form saga. This is Sarnoski’s directorial debut, who has also penned the story, along with Vanessa Block. The film follows a truffle forager who sets off on a quest to retrieve his beloved truffle-finding pig who went missing. Opening up to great critical response, the film has generated a significant buzz for itself. Cage and Wolff’s performances are some of the most prominent subjects of praise surrounding the film.

Vanessa Block also serves as a producer along with Cage. Patrick Scola helmed the cinematography while Brett W. Bachman handled the editing. Alexis Grapsas and Phillip Klein have composed the music for the film. It’s a co-production between Al-Film, Endeavor Content, Pulse Films, BlockBox Entertainment, Valparaiso Pictures, and Saturn Films. The film stars Nicholas Cage as Robin “Rob” Feld. He is a truffle forager whose beloved pig goes missing, and so he sets off to retrieve him. Alex Wolff also stars in the film, playing Amir. Adam Arkin plays the role of Darius, Nina Belforte plays Charlotte, and Gretchen Corbett plays Mac. Julia Bray plays the role of Tweakette, and Darius Pierce plays the role of Edgar. Elijah Ungvary plays the role of Tweaker, while Cassandra Violet plays the role of Lori. Pig hit theatres in the US on July 16, 2021.

The film follows Cage’s Robin “Rob” Feld. A former chef from Portland, Rob moved away from that life after his wife and partner passed away fifteen years ago. Now he lives in recluse as a truffle forager. Utilizing his prized and dear foraging pig, Rob hunts truffles deep in the forests of Oregon. His new livelihood entails him supplying the truffles he hunts to the young and inexperienced seller, Amir. One night, a few unidentified people assault Rob and steal his pig. Rob turns to Amir for help. Amir helps him find a group of junkies who might’ve something to do with his pig. Another local truffle-hunter also suspects these junkies of being the perpetrators. Rob and Amir go to the junkies and interrogate about the pig.

The junkies claim that they don’t have the pig. However, they tell him that the person who took it from them lives in downtown Portland. Rob and Amir then infiltrate an underground fighting ring. There, they find another clue regarding the pig’s whereabouts. The next morning, Amir makes himself and Rob breakfast and then tells Rob how he admires him as a chef. We then learn that Amir’s parents were in a not-so-happy marriage. However, Amir has one memory of his parents being the happiest following a dinner at a restaurant. The restaurant, as it turns out, was Rob’s.

Portland and the Past

This memory of Amir is from when Rob used to be a chef at Portland, and Amir’s mother had not committed suicide yet. After finding a crucial lead from the fighting ring, Rob and Amir head to another location. Rob asks Amir to book a reservation for themselves at a popular restaurant called Eurydice. Meanwhile, Rob visits his old home where he lived with his wife, Lori. Back at Eurydice, Rob asks to meet with the head chef of the restaurant. The head chef is Derrick, who was formerly a pasta chef at Rob’s restaurant. Rob criticizes Derrick for opening a contemporary restaurant when he always wanted to run a pub. Derrick then confesses to Rob that it was Amir’s rich father, Darius, who got Rob’s pig stolen.

Darius came to know about the pig when Amir told him about it. Derrick tells Rob. Angered, Rob calls it quits on his partnership with Amir. He then heads off to confront Darius at his home. Darius offers him 25,000 in exchange for his pig. He also threatens him that he will get his pig killed should he come after him again. Meanwhile, Amir visits his mother, who is still alive but in a coma. He then goes to pick Rob from Darius’s house. Rob tells him that he actually doesn’t need his pig to hunt truffles. He just keeps him because he likes his company. Rob then asks Amir to help him retrieve his pig another way. Rob gets a loaf of bread from his former baker while Amir takes a bottle of wine from Rob and Lori’s personal collection.

The two then sneak back into Darius’s house start cooking a meal. They cook the same dinner that Rob cooked for Amir’s family back at his restaurant years ago. Darius eats the dinner and is moved to tears over the meal. Rob asks him about his pig’s whereabouts again. Darius reveals to him that the junkies he hired to steal it had mishandled it. That led to the pig’s eventual death. The revelation devastates Rob. Amir and Rob then drive back to the diner whence he first picked him up. Despite all that transpired, Rob decides to continue his partnership with Amir. Rob returns to his cabin and plays a tape of Lori singing to him for his birthday. In the credits scene, sounds of shoveling can be heard with a pig snorting in the background as well. 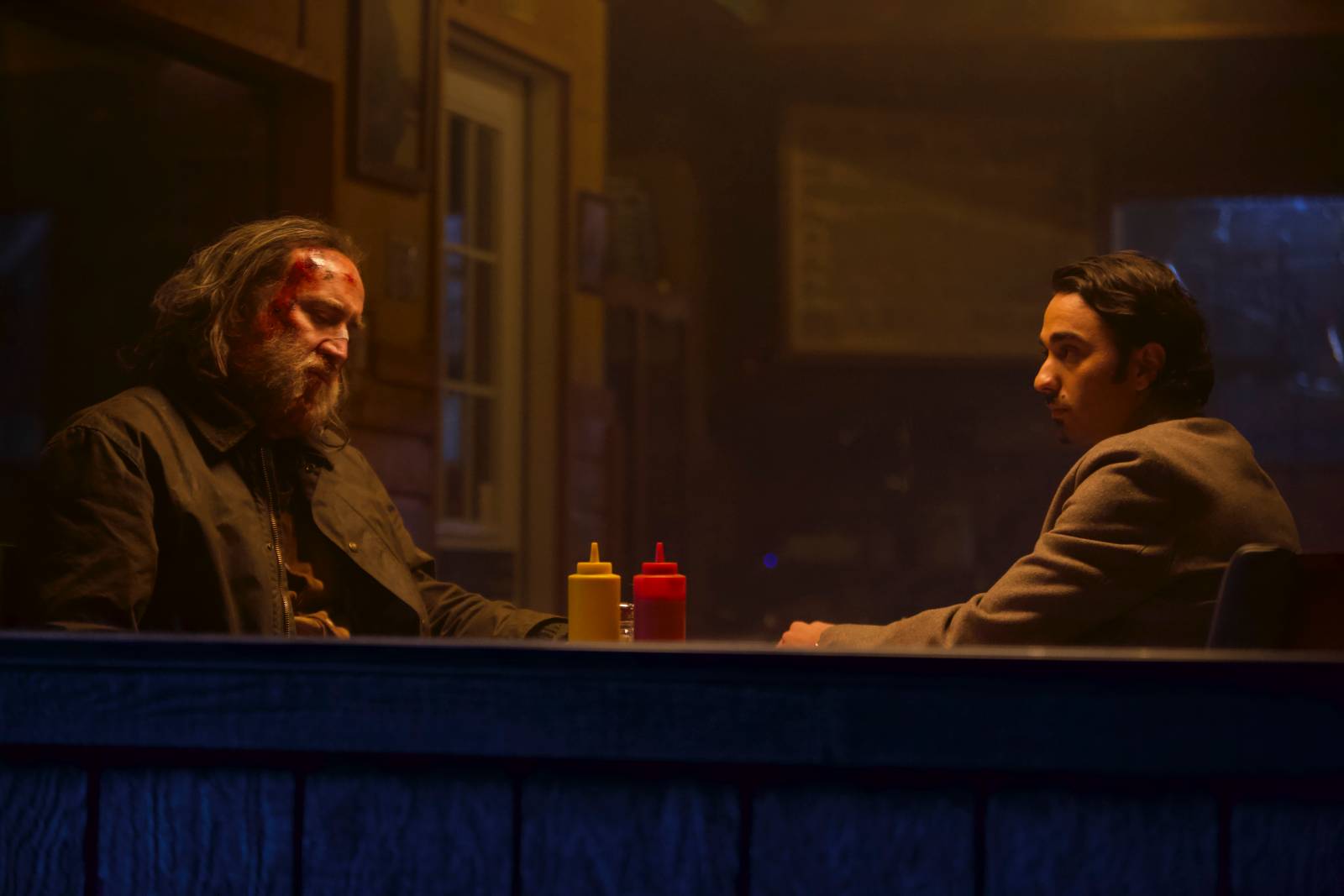 Also Read: Top 5 Films Like Interstellar You Should Never Miss

Going into the film, you’d make the same mistake as everybody else who is familiar with Cage’s filmography. It is expected from a Cage flick for the Oscar winner to go on a crazed revenge-seeking mission. However, Pig does away with the usual route a typical crazy Cage flick takes. There’s not the lunatic Cage but the zen Nicholas, playing a wholesome and sad truffle hunter. This feature directorial debut by Michael Sarnoski subverts the expectations in a very pleasant way. Although another Mandy-type Nicholas Cage vehicle would never be wrong, this change is a pleasant surprise. Cage plays a tender and kind man who hunts truffles with the help of his beloved pig. When the pig is stolen from him, he sets off to retrieve him. However, what one would expect to be a Taken-type of follow-up from thereon, instead takes an existential route.

Cage delivers a heartfelt performance, with an impressive supporting performance by Alex Wolff. The contrast between the recent entries in Cage’s film roster and Pig is delightful and refreshing. There’s a soft cadence to Cage’s delivery that sets this character apart from his other stereotypical and hyper-enraged characters. And Cage carries through the performance with the same candor and delivery. You can’t help but be cautious at every crucial or tense scene. You wait for things to go wrong and Cage finally peeling off this facade, unfurling the crazy beast. However, that never happens. Things point to this very expected culmination, but it never pans out. On the other hand, Wolff oozes with the rich bratty persona that he plays with conviction. This might just be Wolff’s best work to date, which clearly helps the movie a lot.

Pig Movie Review – Conclusion, A Tale of Loss and Company

The story is a touching tale of a man who’s robbed of his beloved company in his solitude. However, there’s another storyline too. The relationship between Rob and Amir is as much prominent as is the search for Rob’s pig. There’s a sad backstory of Amir and his family that also plays into Pig’s main plot. Amir missed the time when his family used to be happy. The difference between the past life of happiness and the sad present one is central to the story. Both Rob and Amir contend with their past lives. Amir also discovers a major secret his father has been keeping from him. At last, even the wealthy and powerful Darius is brought to tears by his past. While Darius and Amir cling to the past, Rob has moved on and found his way in truffle-hunting.

Pig is an incredibly heart-touching tale of humanism. The subversion of expectations in the film is immaculate and constant. There are many familiar setups that are not resolved familiarly. We don’t get to see Cage with his high-octane revenge unleashed upon the enemies. Instead, there’s a touching and perhaps profound story of a man dejected from the meaningless machinations of the modern world and the subsequent violent ways. Our rating for Pig is 4.5 out of 5 stars.