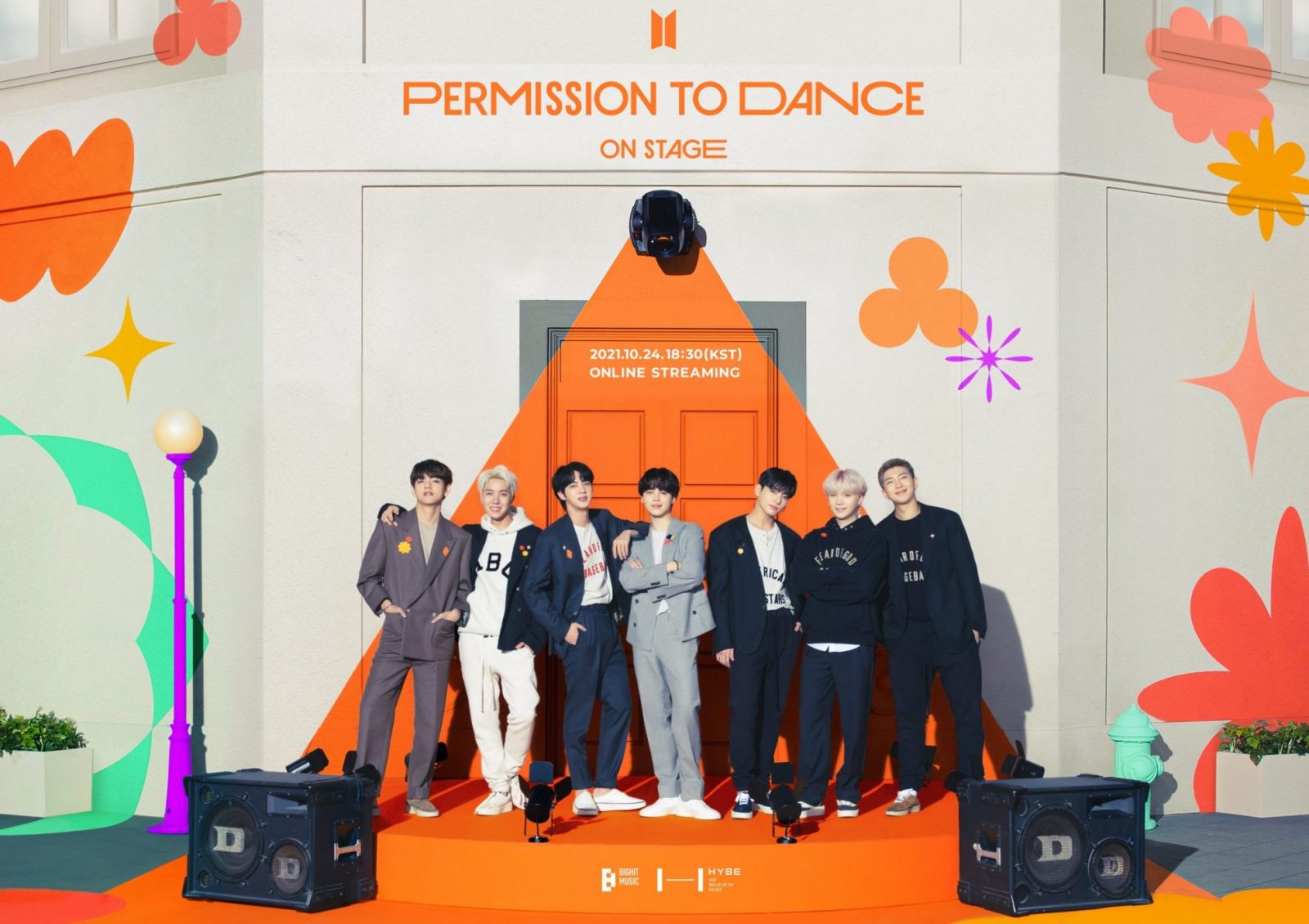 BTS announced their online concert Permission To Dance On Stage in a surprise announcement made on September 15, 2021. It was on their global community platform Weverse that they released the surprise notice. BTS had their last online concert, Map Of The Soul ON:E, last year in October. ARMYs have been taken by surprise and excitement after they heard about their upcoming concert.

BTS had been involved in a bunch of different activities ever since the beginning of the year. They have been releasing endless content and been releasing various performances. Some of the major events include Sowoozoo (8th Muster), BTS Week on Jimmy Fallon, Grammys, Music Festivals, etc. Apart from it, they have also been endorsing a lot of top brands like Louis Vuitton, FILA, Samsung, along with some country-specific brands like Tokopedia, SMART Sim, Kloud Beer, COWAY, etc. All of these endorsements came with lots and lots of content to feed and keep the entire fandom busy.

In addition to all these activities, BTS has also been releasing its original content, like weekly Run BTS episodes. Recently, they also announced the release of the second season of their reality series In The Soop, which will be airing from October 2, 2021.

When it comes to content, ARMY is one well-fed fandom. As busy as BTS is with their schedule, equally involved is ARMY with catching up to their content. Let’s take a look at what we know about Permission To Dance On Stage so far.

Permission To Dance On Stage

Permission To Dance On Stage online concert will be held on October 24, 2021, at 18:30 KST. The details about the ticket pricing and packages are yet to be announced.

Most likely, the tickets will be sold on Weverse shop, the official e-commerce platform by Hybe Entertainment. Every concert has different pricing for different kinds of views, the highest being for the 4K multi-camera view. In that, ARMYs can see the idols performing from different camera angles. They also have the choice to choose between the screens they wish to have on a full-screen display. 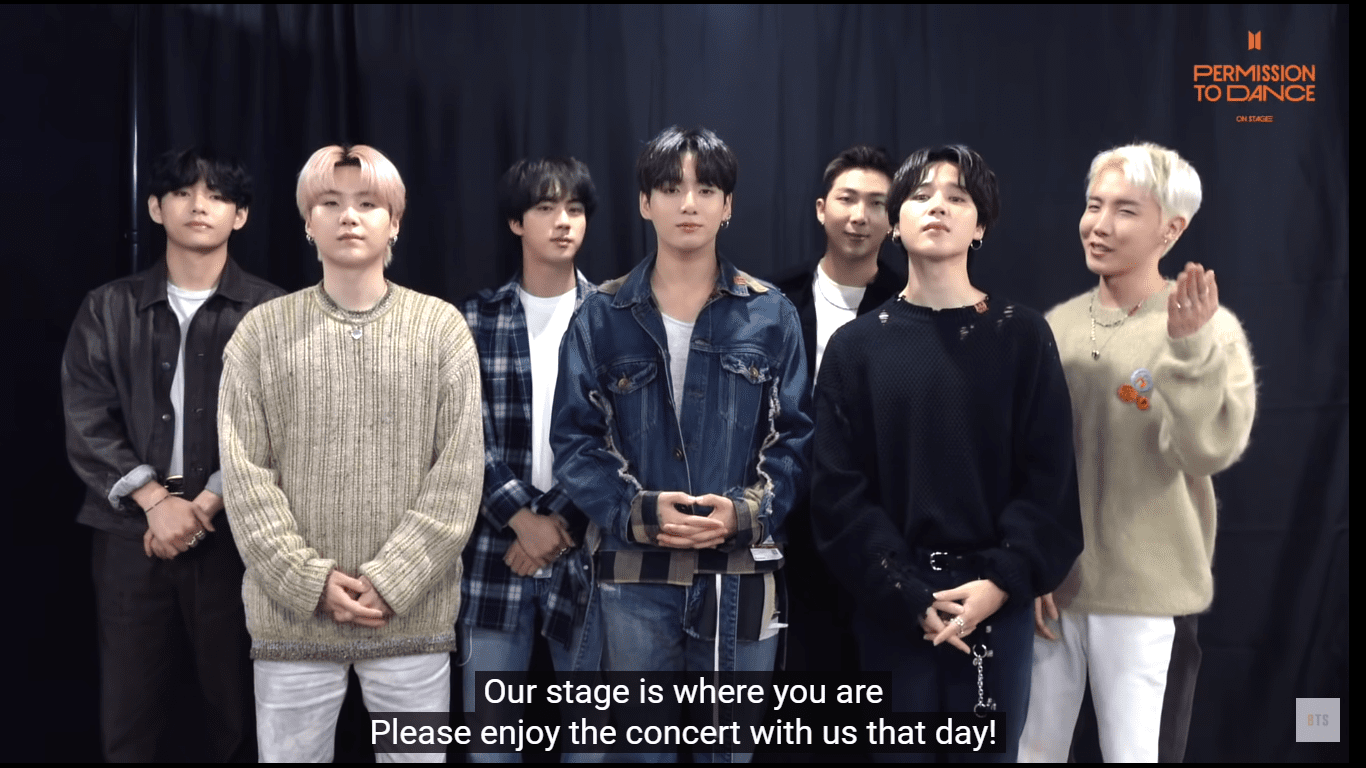 “Wherever you are, that’s where our stage will be! Join in and dance together. We don’t need permission to dance ~♬” as the message reads, one thing is very clear, this concert is definitely going to turn the entire world into a dance floor. So far, BTS’ online concert concepts have included the idea of enjoying the concert from the comfort of their homes.

In the past, BTS has had multiple online streaming events. In June 2020, they came with the live online concert “BangBangCon The Live”. June is when BTS celebrate their anniversary. Due to the pandemic, they could not meet ARMYs in person, and hence, they organized this live to connect with the ARMYs all around the world. They also had Map Of The Soul ON:E concert in October 2020, where they performed the songs from their album “Map Of The Soul: 7”.

Previously, in the June of this year, they held an online fan meeting “SOWOOZOO” on the occasion of their 8th anniversary in the year 2021.

No matter how hard the time gets, BTS and ARMY always find a way to stay connected.

Apart from this blissful announcement, there have been a couple of things that took place within the span of the past one week, which has sent ARMY to a different universe. There was a time when BTS said that they wanted ARMY to be proud of being a fan of BTS, and now they keep giving us more and more reasons to be proud, prouder, and proudest of them.

Earlier on September 14, 2021, BTS was announced as the special presidential envoy by President Moon Jae-in in the Blue House. Additionally, they were also given diplomatic passports. The diplomatic passport has a lot of benefits, along with the permission to travel to 100+ countries without a visa. One of the criteria for being eligible for a diplomatic passport is the minimum age of 30 years. But in the case of BTS, this criterion was ignored because of their outstanding impact.

Also, BTS announced their collab with Coldplay on the song called “My Universe”. The fans have been long speculating the collab after BTS started covering their songs back to back for different performances. According to Chris Martin, the song talks about someone who is told that they cannot love the other person because of their race, gender, or sexuality.

"My Universe is about someone being told they can’t love a certain other person, or can’t be with this race, or they can’t be gay – whatever it might be." – Chris Martin

In one week, we're getting a BTS collab song made in part with queer people in mind. How do we feel gays? 🥺

Later on September 25, 2021, BTS will also be addressing at the 76th UN General Assembly as the representatives of youth. For the same, they will soon be flying to New York City. They have been confirmed to be showcasing a performance through video streaming.