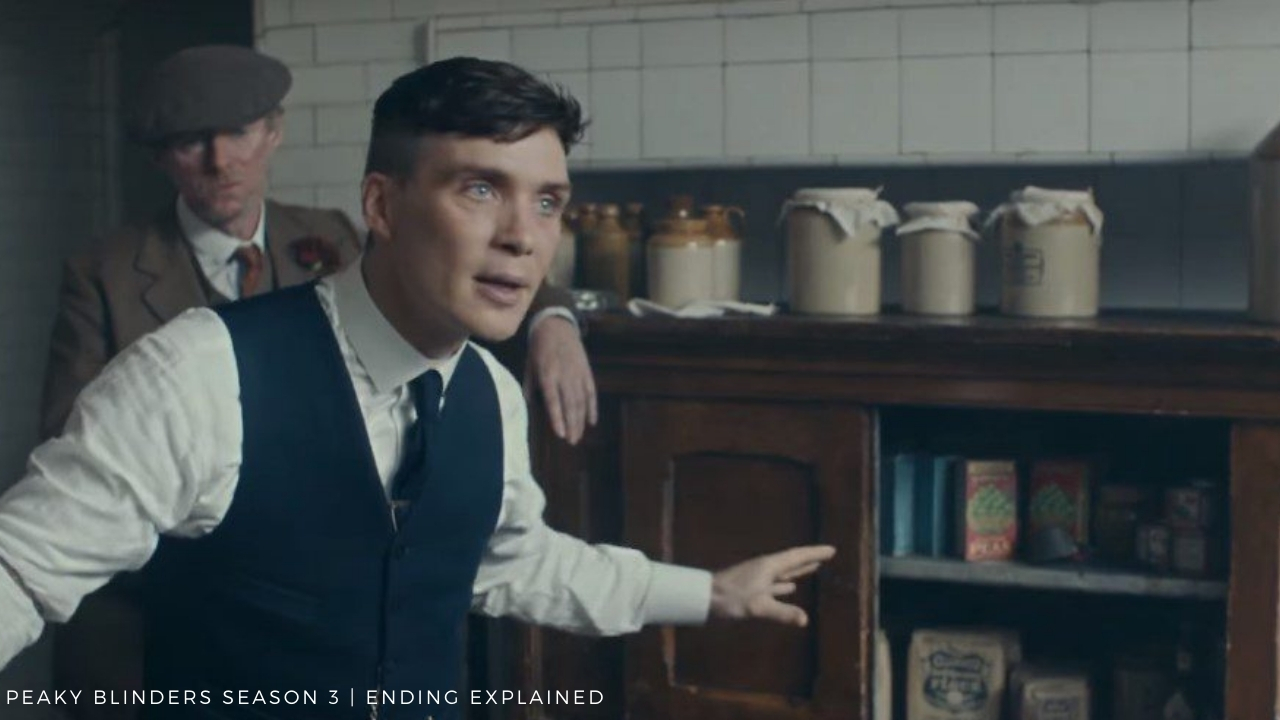 Hello, internet! In this article, we cover the Peaky Blinders Season 3 Ending Explained. The third —and most well-known of the seasons— of Peaky Blinders, a crime thriller that airs on Netflix as well as BBC Two —and later BBC One —and stars Cillian Murphy, Sam Neill, Annabelle Wallis, and Tom Hardy as three tough English men in post-First World War Birmingham. It sounds like a good time, doesn’t it? Today, we’ll tell you about the third chapter of this brutal and very popular series.

Peaky Blinders season three comes to a close with a bang, but the twist at the end takes you by complete surprise. Tommy ultimately chooses to give up his whole family for the benefit of a higher purpose towards the end of the film. I wouldn’t put your trust in anybody, not even Tommy or Polly, and I’d be angry if they managed to bring it all back home. The most impressive aspect of this season is now fully developed their characters have become. As we near the conclusion of this introduction, we invite you to join us at Otakukart for a last look at Peaky Blinders ending.

Season three begins with Tommy and Grace Shelby’s wedding when a Russian guy infiltrates the ceremony and provides the Shelbys with a code phrase. Because it is wrong, the Shelbys are compelled to kill the guy, resulting in Tommy spilling blood on his wedding day. Arch Duke Romanov (played by Jan Bijvoet), who has fled to England after the Russian revolution, compensates Tommy with a sapphire for the man’s murder, and the two agree to future business dealings. Tommy is also introduced to his niece, Grand Duchess Tatiana Petrovna (played by Gaite Jansen).

Father Hughes (played by Paddy Considine) is also engaged in the scheme. He threatens to murder Tommy’s son Charlie if he contacts his sister Ada because of her communist ties. Grace wears the given sapphire to the Shelby Charity Foundation dinner and is killed on the instructions of Vicente Changretta (played by Kenneth Colley) as retaliation for beating up his son, Angel Changretta. Tommy falls into sorrow and enters into a violent relationship with the insane Tatiana. In the next section, we will include spoilers, so you’re warned.

What else happened in Peaky Blinders Series 3?

Tommy seizes Vicente and starts torturing him together with Arthur and John. But Arthur kills him out of compassion, leaving Tommy furious. Tommy learns that Father Hughes is selling the Russian family to the Soviets and offers to murder him for free. He enlists the assistance of Alfie Solomons. The two collaborate to carry off a robbery in order to get the genuine diamonds belonging to the Russians, who were going to dupe Tommy and give him fakes – and have him murdered.

Tatiana reveals to have been a part of the jewelry theft all along, and she takes her portion to Vienna. Tommy gives the remaining money to his family but then discloses that the police are on their way to arrest them all for their roles in a train explosion that Tommy was in charge of.  Ada takes over the family company in America, and Linda and Arthur share a child. Michael confesses that he was molested by Father Hughes and that he is the one who eventually kills him.

Where can I watch Peaky Blinders?

This show is widely available. If you live in the United Kingdom, it runs on BBC Two. It was initially telecasted between May and June 2016. If you have BBC iPlayer, you can stream it there. It’s also available on Netflix. The most basic plan for Netflix goes for US $8.99. There you can watch unlimited shows. And all the Peaky Blinders seasons are there for your binging pleasure. The third season runs six one-hour-long episodes. So, what are you waiting for? Tune in, make your bowl of popcorn and start watching these guys kill each other. That’s only six hours in an average COVID-19 lockdown day.