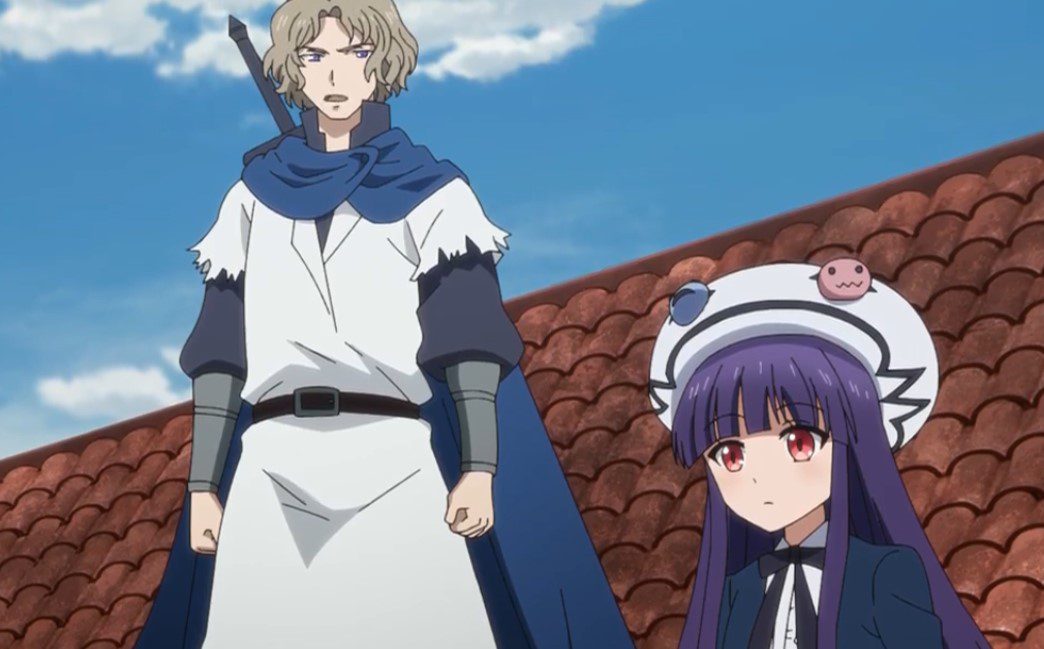 Todoroki the High Ogre’s arrival starts with Peach Boy Riverside Episode 11, with Shinki vs. Carrot and Bassoo vs. Frau. This episode will release this next week. From the latest episode of Peach Boy Riverside, we saw Mikoto’s pst where he defeated God of Laws, who killed his master. That day Miko became the new Peach Boy with a headband and a blade. In the present battle, Gator decided to counterattack Todoroki’s signature move, and Winnie arrives while blocking the attack and asks Gator if he wants to die.

Todoroki asks who the hell is this lady to stop his lightning strike. She replied that she is Winnie, the Witch of the Western Forest. Winnie decided to attend Gator and show him a sword that Frau once wield. She told Grator that he could use it to beat Todoroki. Joselin and her underling are watching the battle on the rooftop. Joseline realizes that she knows that sword, and it is powerful enough to slash an Ogre at single shit. Grator told Todoroki that he wouldn’t lose, and Winnie told Grator to find ways to wield that sword, and she will be watching.

Todoroko unleashes a lightning blade, and he is confident that his lightning sword can break Grator’s sword. Joseline comments that it is a scary word and it is hazardous. Winnie reveals that the name of the sword is ”Air, the treasure of Heaven.” Air can cut anything, even an Ogre flesh. Todoroki comments that wielding that sword doesn’t mean he is on the same level as him. Todoroki adds that a metal sword will never defeat a lightning one. Grator replies that if the Witch of Western Forest says the sword, he will believe it.

Todoroki charges while Bassoo thinks he has smashed Frau, and it is time for him to head to Todoroki’s location. Frau waked up, and Bassoo is surprised that this lady is still alive. Bassoo realizes that he hit Frau with a cannon at close range, but she is still breathing. Frau replies that Alta left her with new powers. She jumps up and cuts Bassoo’s wing. Bassoo comments that Frau is no mere harefolk, and it is a disgrace that he is of no use. Frau cut his head, but his body remained standing.

Frau falls unconscious thinking about helping Grator. Carrot vs. Shinki went intense, and Shiki reminds her that a High Ogre is nothing without their horn. But he won’t let her escape, and he begins to shower her with slap attacks. Shinki also reminds her past name Meki telling her to die. Carrot wonders what she has to do, but the only way to pierce Shinki’s body is to get closer. Shinki chases her and wonders why she is running away. Carrot arrives at the dead end and stops while Shinki walks towards her.

Shinki comments that it is bad luck for Carrot to meet the dead-end, and it is time to end this. Carrot has nothing on her mind and realizes that she must use her last shot to ko Shinki. Shinki attacks and she use Xia Dao to blast him. Sumeragi battles with Sally, who said she could protect humans. Sumeragi decided to let her go and realizes that he has a soft spot for her. Grator vs. Topdoroki continues as they exchange massive strikes. But Sally arrives, and Todoroki decided to ally with them after she convinces him. Sumaragi betrays Todoroki and stabs him.

Peach Boy-Riverside Episode 11 will be released on Thursday, 9 September 2021, at 10:00 PM. This anime will conclude soon after releasing the next episode. Let’s look at the Peach Boy Riverside details below.