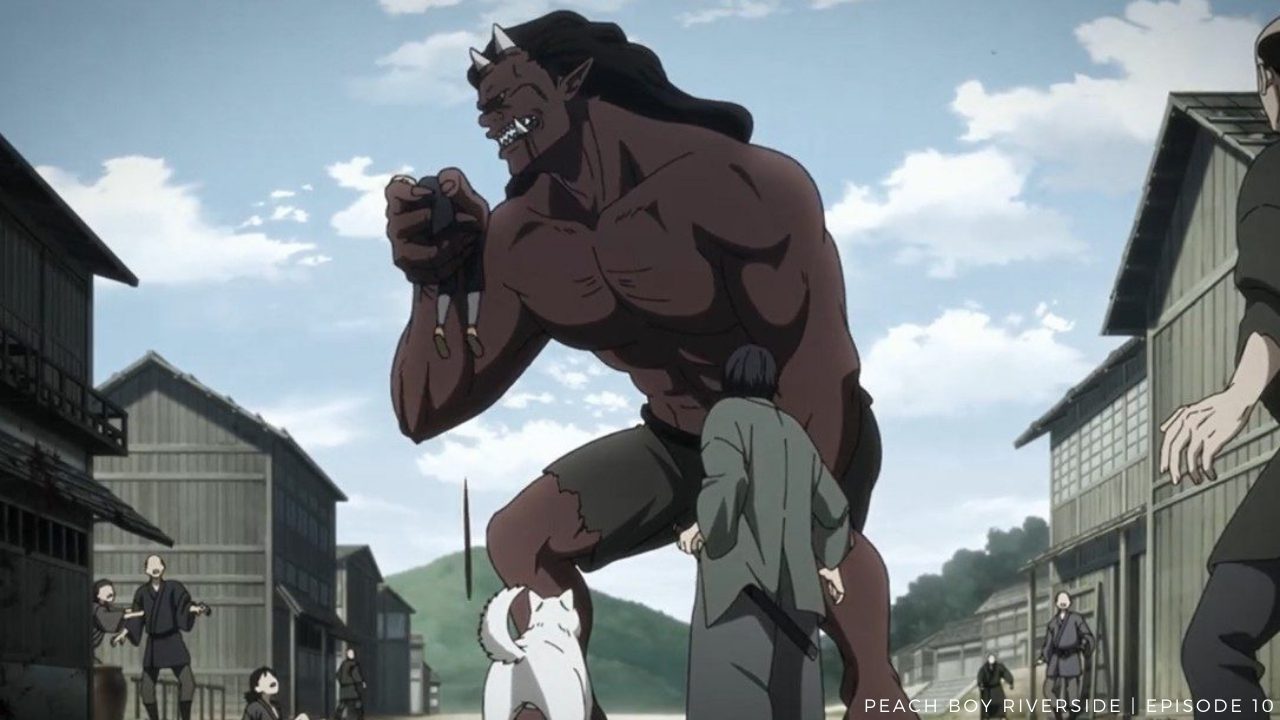 The episode begins in the past where Mikoto was young when he lived with Hiko. One day a man met with a talking dog in the village and gave that dog food. The dog told the man he fools humans and play dead for them to give him food. The dog adds that humans consider him an ill omen and attack him. The man adds that the dog fooled him two since he is giving him food. The two decided to travel together, and the dog becomes his pet. In the afternoon, the guy and the dog heard the villagers saying an Ogre is eating humans nearby.

The two arrive at the scene and find a gigantic Ogre chewing humans like cheapies. The dog told Hiko to run, but he decided to face the Ogre. Hiko notices that the Ogre is about to devour a young boy, and he wields his sword. The dog told him that dying her won’t help him find his parents. Hiko’s eyes turn blue, and he slays that Ogre with a single slash. The citizens praise him that a human killed an Ogre. Hiko comments that he is seeking the parents who abandoned him, but he can’t abandon people in his village.

Before Hiko killed the Ogre, the Ogre asked him how he dares defy him since he is a mere human. Hiko told the Ogre to stop the destruction, and the Ogre tried to smash him with a massive punch that he holds the punch up using his bare hand. The Ogre was surprised to see a human blocking his gigantic fist. Hiko reminds the Ogre bout his name and cuts it in half with a single strike. Hiko comments that he is a Peach Boy born from a peach. The citizens wonder where a human gets that overwhelming power.

The rumors begin to spread all over the Peach Boy rise and protect his village. A Peach Boy became an enemy of Orcs, Ogres, and other kinds of Beasts. The people suffering Ogre attacks ask Hiko for his help whenever they are in trouble. Hiko didn’t hesitate to help them and begins to kill the Ogres. That made Hiko stop searching for his parents and protect everyone. One day Hiko and the dog traveled, thinking that killing the Ogre leader will end the battle. Hiko and the dog arrive at Ogre Island to assassinate the leader.

Hiko had an intense battle, and the leader of the Ogres accept defeat after he piers his blade on his heart. The leader told Hiko that he beat him, and he surrenders; the leader promised Hiko that he would never trouble humans. The land becomes free from Ogres, and Hiko became the Hero. Hiko met with young Mikoto and helped when the villager was about to kill him that he has a horn. Mikoto and Hiko became like a father and son. Hiko got killed by the God of Laws, and Mikoto earned his sword, Peach Boy title, and armband after Hiko died. Mikoto confronted the God of Laws and killed him.

Peach Boy-Riverside Episode 10 will be released on Thursday, 2 September 2021, at 10:00 PM. Stay tuned and don’t miss the last two episodes of this anime every Thursday; You will get the remaining episodes on Thursday; Let’s look at the Peach Boy Riverside latest details below.

On the Verge of Insanity Episode 16: Release Date & Spoilers