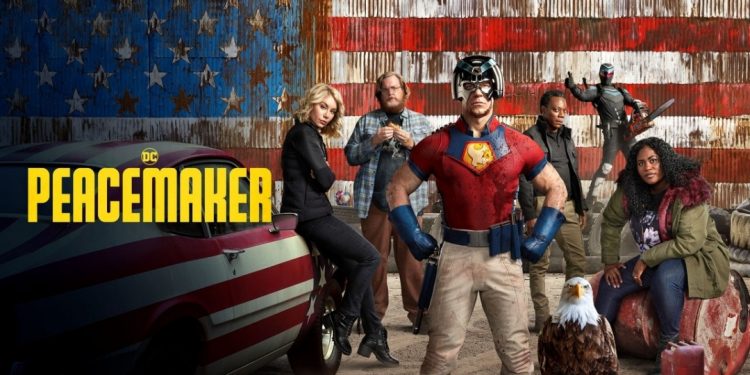 "Peacemaker" will premiere on HBO Max

“Peacemaker” Episode 1 is set to premiere soon, and the hype amidst the fans is all for it. The uber-patriotic and superhuman marksman is returning after his utter defeat at the hands of Bloodsport at the end of “The Suicide Squad” (2021). The diabolical peacekeeper was in emergency care at the end of the film, signaling a continuation of his story. Reprising the titular role, Cena will continue his story in the standalone — and DCEU’s first-ever — TV series. Disgusting, brutal, and twisted as he may be, Cena’s eccentric super anti-hero/supervillain became an instant fan-favorite by the end of the film.

An announcement for a standalone show followed not so late after that, with director James Gunn set to helm the series. Gunn will not just be writing for the series as showrunner but will also direct five out a total of eight episodes of its first season. Along with Gunn, Cena has appeared to be super passionate about the character. Many of his recent interviews and TV appearances have seen him don the eponymous character’s goofy costume.

With the series premiere just around the corner, let’s now delve into all that episode 1 of “Peacemaker” will entail. Spoilers ahead!

“Peacemaker” will revolve around the titular anti-hero, taking place after the events of “The Suicide Squad” (2021). Reprising his role as the violent pacifist, John Cena will star as the lead Christopher Smith, aka Peacemaker. Merciless, unhinged, and a virulent peacekeeper, Smith’s notion of peace is unconventional, to say the least. Moreover, his methods of keeping and maintaining peace are even more twisted. He would kill and butcher anyone to achieve “peace”. No matter what kind of a cost it may incur, Smith will pay it. After the events of the 2021 DCEU film, we will see the character’s return in the standalone series, which will also be a part of the wider DC universe.

Who Stars in Peacemaker — Cast Details

Joining Cena in the cast will be Steve Agee as John Economos. We met his character in the film as well. Unlike the movie, however, Agee will star in a way more prominent role. Economos is the warden at the Belle Reve penitentiary. He’s also an aide to Amanda Waller, who may have a short cameo in the series. As of now, there are no announcements regarding Viola Davis being in the show. Also in the cast is Jennifer Holland as Emilia Harcourt. An NSA agent and also an aide to Waller, Harcourt will feature prominently in the show. Robert Patrick stars as Auggie Smith, Peacemaker’s estranged father.

Danielle Brooks stars as Leora Adebayo, another one of the leads in the show. Freddie Stroma stars as Adrian Chase, aka “Vigilante” — a district attorney who leads an alternate life as a crimefighter. He has quick healing abilities and, judging by the trailers, may have great chemistry with Peacemaker. Lastly, Chukwudi Iwuji stars as Clemson Murn. Actors appearing in recurring roles include Lochlyn Munro as Larry Fitzgibbon, Elizabeth Ludlow as Keeya, Alison Araya as Amber, Lenny Jacobson as Evan, Rizwan Manji as Jamil, Christopher Heyerdahl as Captain Locke, and Annie Chang as Detective Sophie Song.

Episode 1 of Peacemaker is set to release on January 13, 2022. The first three episodes of the show are set to premiere simultaneously this Thursday. The premiere episode might pick up straight after the events of “The Suicide Squad”. At the end of that film, we learned that the Peacemaker survived his duel with Bloodsport, thanks to Amanda Waller. She needs Peacemaker to do the American government’s dirty deeds. The fatal hypocrite keeper of peace will happily abide by Waller, as nothing ruffles his feathers more than the American flag.

As soon as the government feeds him any patriotic spiel, he’ll do anything to achieve his exaggerated understanding of peace. However, the series is an origins story, so we might only get a little of the events right after “The Suicide Squad”. It also seems that we’ll learn a great deal about the titular character’s backstory, childhood, and why he became who he is. In particular, his relationship with his father seems to be the central focus of the show’s plot. Furthermore, we will also see him seemingly work with a team. Seeing how well he worked in a team the last time around, the side characters who uphold morals and ethics in much different regard may be in for a treat.

Peacemaker Episode 1 will premiere on HBO Max at 3:00 a.m. ET. The show will be available to stream on HBO Max in the U.S. You can sign up for a monthly plan at the cost of $9.99 (with ads). An ad-free subscription would set you back $14.99 per month. In Canada, “Peacemaker” will be available to watch online via Crave TV service. Unfortunately, as of yet, there exists no service or platform in the U.K. to stream the show.

What Will Go Down In ‘The Book of Boba Fett’ Episode 3?