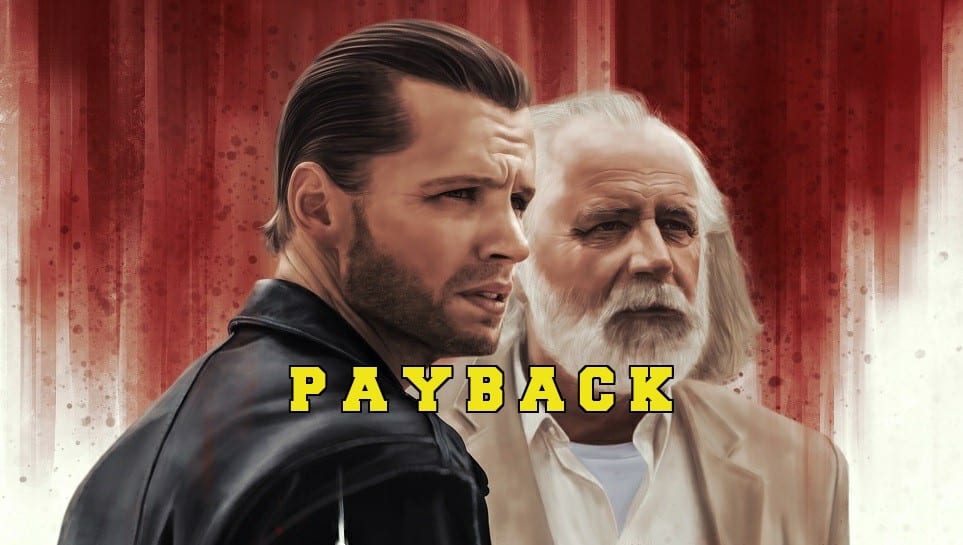 Payback is a 2021 crime thriller directed and written by Joseph Mensch. The screenplay is also co-written by Metin Aksoy. It stars Anna Baryshnikov, Ari Barkan, Bill Sage, Boris Lee Krutonog, David Vadim, Elena Satine, Lev Gorn, Matt Levett, Rade Serbedzija, and Toby Leonard Moore. The premise revolves around a young stockbroker at a mob-controlled Wall Street firm. When he’s betrayed and imprisoned for six years, he sets out on a quest for vengeance upon his release.

Payback is a low-budget production that saw a small release on February 5, 2021. The film has received generally mixed reviews. It’s a competently made film, despite its low budget. But the story doesn’t do anything in terms of originality and it fails to be a gripping thriller. Now let’s talk about the plot, but beware of the spoilers that lie ahead! 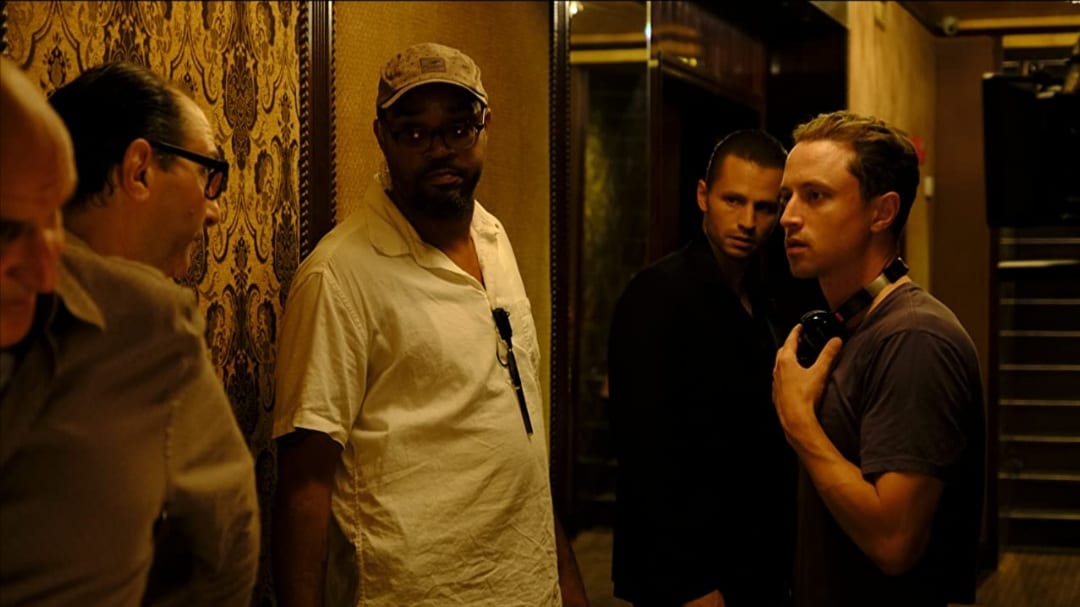 Director Joseph Mensch with the cast and crew on the sets of the film Payback (2021).

Payback starts in Wallstreet, where salesmen are trying to close deals. Amidst the bustle, is Michael “Mickey” Markovich, who is closing sales at a rapid rate. He’s good at closing sales and has earned the title of “prince of one-call sales”. This whole sequence of stockbrokers closing sales on calls is very reminiscent of Wolf of Wall Street. Then we meet Ricky, senior and friend to Mickey. They then go to the boss of the firm, Mr. Pushka, who’s also known as “Cousin”. Ricky takes Mickey to pitch a sale to Pushka. During the pitch, Mickey impresses Pushka with his pitching skills and knowledge. Pushka hands over the responsibility of the deal to Mickey, which perturbs Ricky. An expression of envy can be seen on Ricky. Pushka then talks with Mickey and praises him.

Later, Mickey goes on to meet Frank, a customer who had invested his money into stocks. Frank wants out now and wants to cash out, citing reasons about his due mortgage bills and daughter’s tuition. Mickey tries to convince him to stay with their company and not cash out just yet. However, Frank refuses. Mickey then meets Ricky in his office and he informs him of financial irregularities with Frank’s account. He tells Ricky that Frank’s account has no money in it. Ricky tells him that he will look into it and that it might just be glitches. Mickey and his wife go and visit his Pappy. Pappy had looked after Mickey growing up after his parents died. Mickey keeps helping out Pappy with money. Pappy tells him that it’s not necessary but Mickey insists on it, saying it’s for Baba’s treatment. 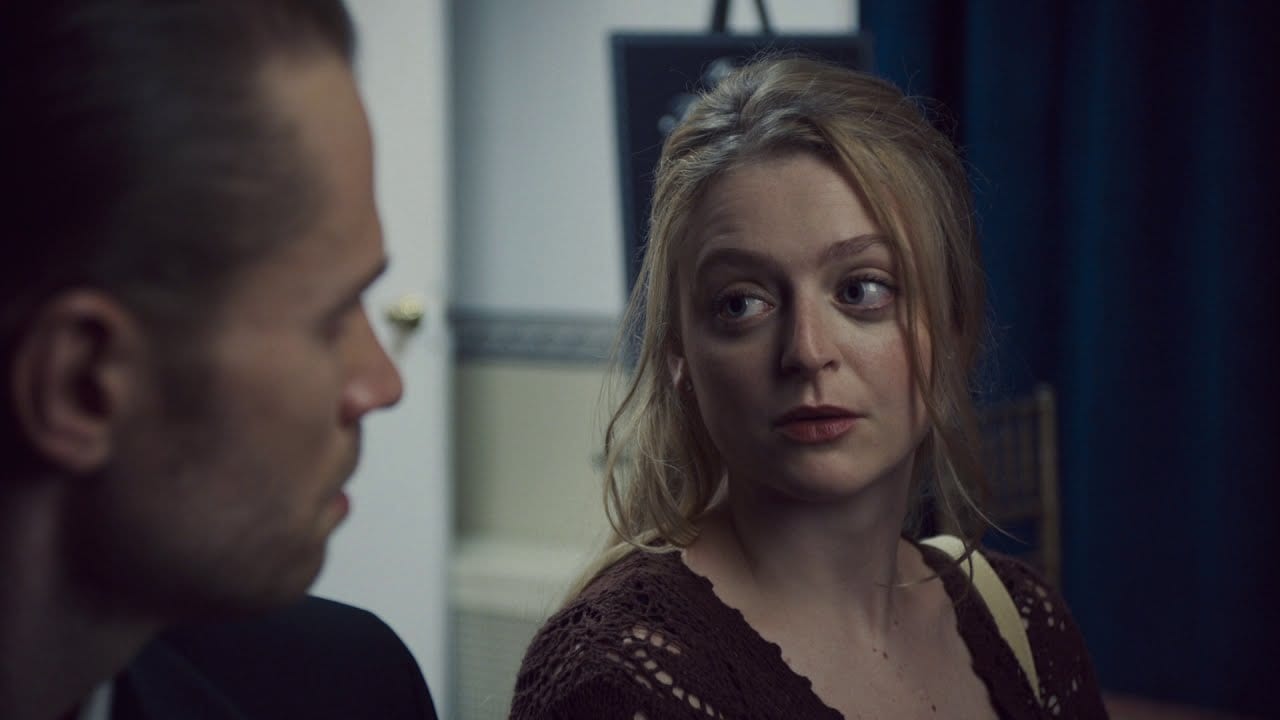 Mickey meets with Ricky again and Ricky gives him a new job to do. He gives him an address to one of his friends in LA. He calls his friend “The Dentist” and Mickey knows who he’s talking about. Ricky tells him to go there and help him out with his new business. He tells him to go there for about a week and help teach Dentist’s men with pitching their business. Mickey says that his wife is due to childbirth in a week and he has to stay with her. But Ricky tells him that it’s a big deal and convinces him. Mickey then asks to take one of the salesmen with him. Ricky is reluctant but eventually agrees. Back at home, his wife is unsure about the trip. But Mickey tells her he’s doing it for the baby and the family and they’d need money.

Mickey then departs for LA with Boone. They arrive and driven to the Dentist aka Slava’s house. The driver Ruslan drops them at Slava’s house and Slava welcomes them. He then shows the two his weapons collection which also includes a berretta gun. After dinner, Slava explains the business to Mickey. He tells them that he’s going to open a new company but his men do not know how to pitch. So Mickey will have to teach the boys how to pitch the company. The second step will require Slava to invest seed money but he will need more. the third step will be finalizing the deal and going home with 5%. Mickey agrees and shakes hands with him. Slava then tells him that he’s not your usual straight guy. He doesn’t keep his money in a bank account, he has kept it in a store owned by his friend. 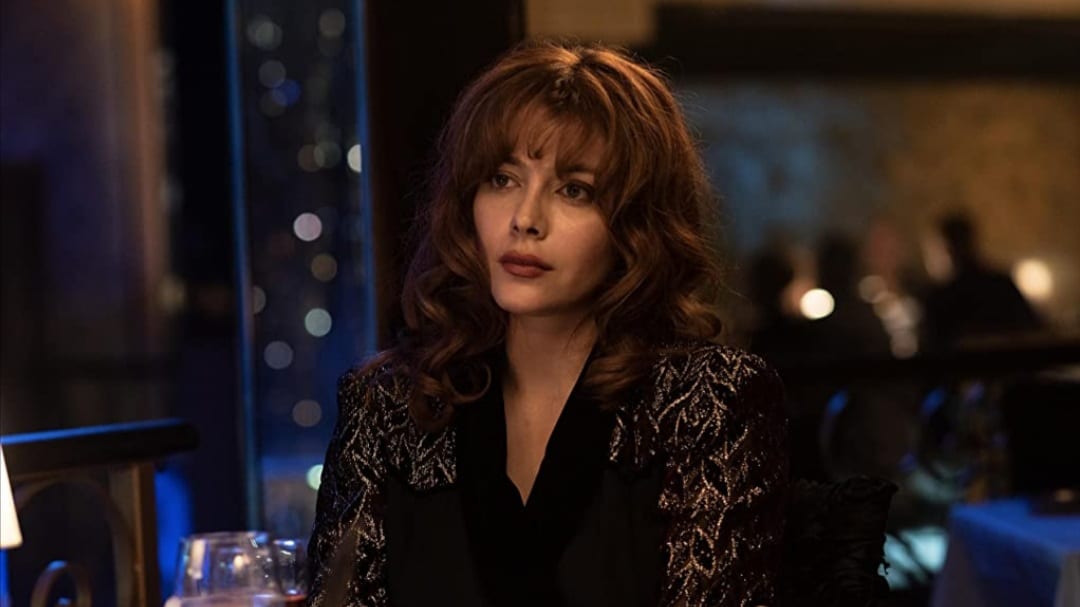 Slava tells Mickey that his friend Georgi keeps his money in his store in West Hollywood. And Mickey needs to go, take the money, and bring it back to Slava. Mickey agrees and heads off to the location with Boone and Ruslan. He arrives at the store and meets Georgi. However, what would have been a normal business, turns ready ugly very soon. Georgi acts unexpectedly hostile towards Mickey and Ruslan. He tells Mickey that Ruslan is a red flag and it seems that he isn’t a friend of Slava. Ruslan has a verbal spat with Georgi and one of Georgi’s men joins in. He then hits the guy and Georgi pulls out a gun, shoots at Ruslan but he ducks. Ruslan then shoots Georgi’s man and then Georgi. Boone gets shot in the stomach in the crossfire. Mickey then carries Boone and drives him to a hospital.

As he arrives at the hospital and the medical staff carries Boone, there’s a cop present too. Mickey gets arrested and is brought in for questioning. The detective asks him about what transpired. Mickey refuses to speak and asks for his lawyer. The detective then tells him that Georgi and his man are dead and the gun they were shot with bears Mickey’s handprints. That’s when a lawyer who represents Pushka arrives. The lawyer tells him that the evidence incriminates him and he’s been charged with homicide. He then tells him that he can plead it down to manslaughter, reducing Mickey’s sentence to 10 years. Mickey tells him he didn’t kill them, Ruslan did. The lawyer asks if he can testify that answer in court, to which Mickey has no answer. 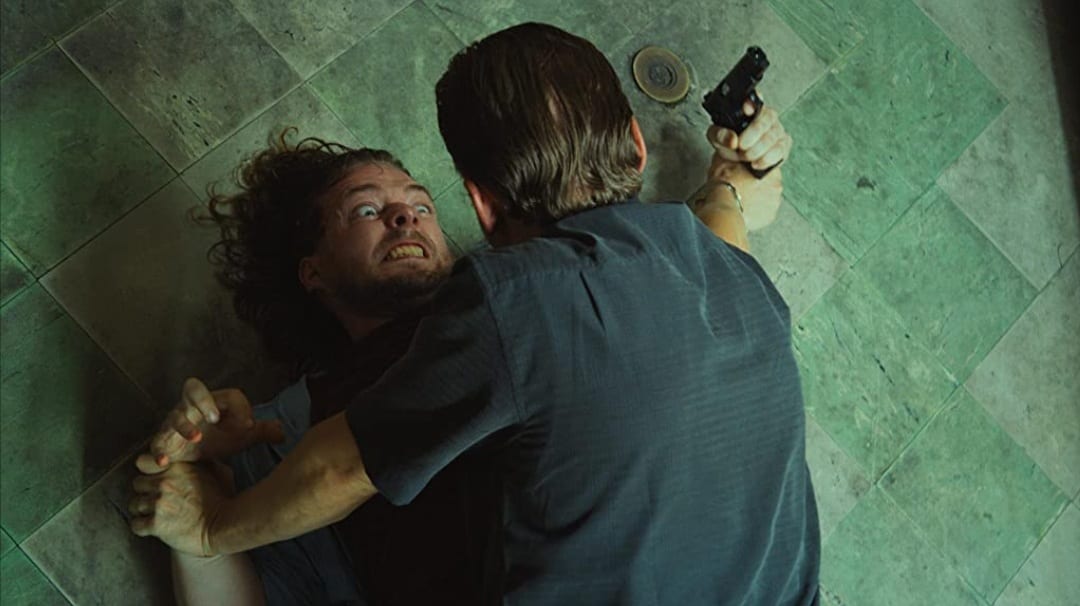 Getting Back in Business and Meeting Those Who Wronged Him

Mickey faces a prison sentence and serves his time. He is released after six years and Pappy is there to pick him up. At home, Mickey sees his girl who is now 6 years old. His wife Judy welcomes him. Mickey then goes on to meet with Lenny who gives him some money for his family. He also asks for a favor from Lenny. Mickey then meets Ricky who welcomes him but Mickey is very suspicious of him and doesn’t take his closeness with his wife very well. He then meets Pushka who tells him that he will be doing a new job. He will not be brokering sticks anymore due to criminal records, instead, he will handle the delivery of guns. Mickey then goes to Frank and discovers, as he expected, that Ricky stole from Frank and pinned it on him.

Mickey then goes to secure the order of guns that will be delivered to LA. He goes to his friend Randy Rhodes in Texas for the guns. After filling the order, he calls Kat, Pushka’s assistant, to know where it will be delivered. She gives him the location and he heads off to LA with Randy. They reach LA and complete the delivery. However, Mickey tells Randy to go while he will stay there a while to meet some friend. He then follows Ruslan to a shop named “Russell’s Flowers”. Ruslan owns that shop, with his daughter, in what he calls his retirement. Mickey confronts him and wants to shoot him down. But Ruslan tells him that his fight is with Slava and he was just doing his job. Mickey doesn’t shoot him and leaves the shop.

While driving off the place, he’s stopped by Slava’s men and carried to a warehouse to Slava. Mickey and Slava have an intense exchange and Slava directs his man to shoot Mickey. However, before they can do it, Randy shoots him down. Mickey shoots Slava as he drops. He then confirms Ricky’s betrayals and scheme to set him up. Randy then shoots Slava. Mickey goes to meet with Pushka and tells him about Ricky’s betrayals and his treacherous business practices. Pushka, however, threatens Mickey that if he meddles with his top earner or jeopardizes his business, he will pay. Later, Mickey follows one of Ricky’s men to his location and in the confrontation, kills him. 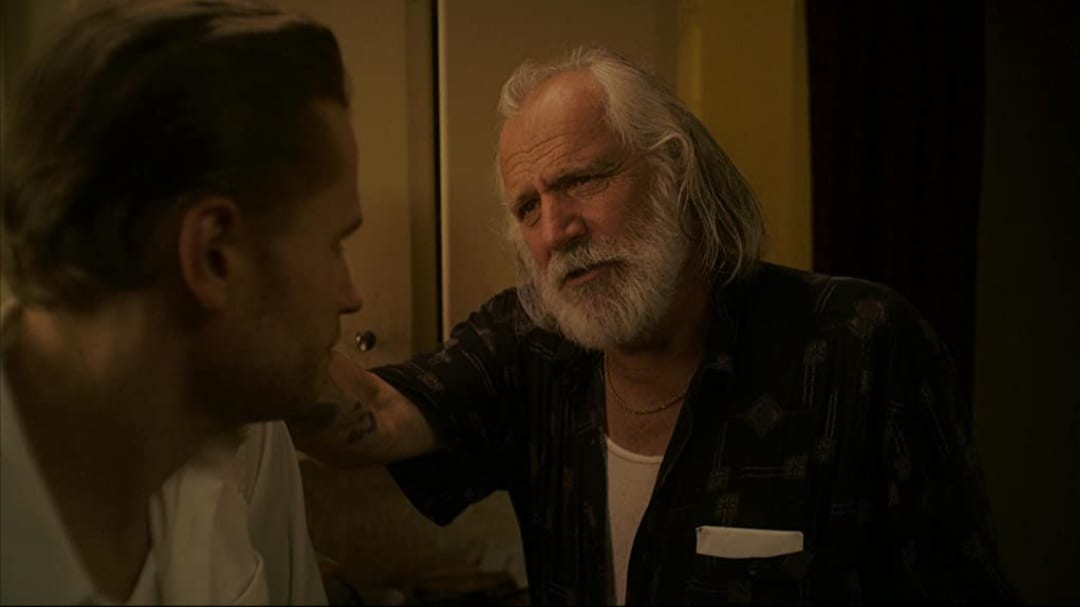 Hearing the news of his murder, Judy kicks Mickey out of the house for risking her and their daughter’s lives. Later, Mickey is about to get ambushed by Pushka’s men but Pappy saves him, getting shot himself. Pappy dies and at his funeral, Judy visits Mickey and tells him that she’s leaving. Afterward, Mickey goes to Kat to ask for her help with killing Pushka. She agrees and as Pushka calls for Ruslan to eliminate Mickey, their safe house is compromised. Mickey confronts Pushka and shoots him dead. Mickey goes on to own the firm and run it with Misha. The film ends with Mickey leaving a voice message to Judy that everything is alright now. As the line gets cut, he appears unsure of his statement and wary of what dangers await him.

Payback is quite a competent film for its low-budget. The production might seem lackluster but for a budget like this, it’s way more than alright. One of the film’s strongest suits is the acting performances. Matt Levett delivers a good performance as the lead and so does Toby Leonard as Ricky. The acting by almost all of the cast is competent. Matt Levett can very well carry a film on his back and it’s evident by his performance here. Although the movie is a thriller, it isn’t all that thrilling. But it kind of makes up for it by its concise runtime. The fight choreography isn’t anything special but it’s also not terrible. I went into the film with pretty low expectations and was pleasantly surprised to a certain extent.

Joseph Mensch’s directorial debut is an average but not a bad start. Payback packs some good performances and a good enough pacing. I rate Payback a 2.5 out of 5.