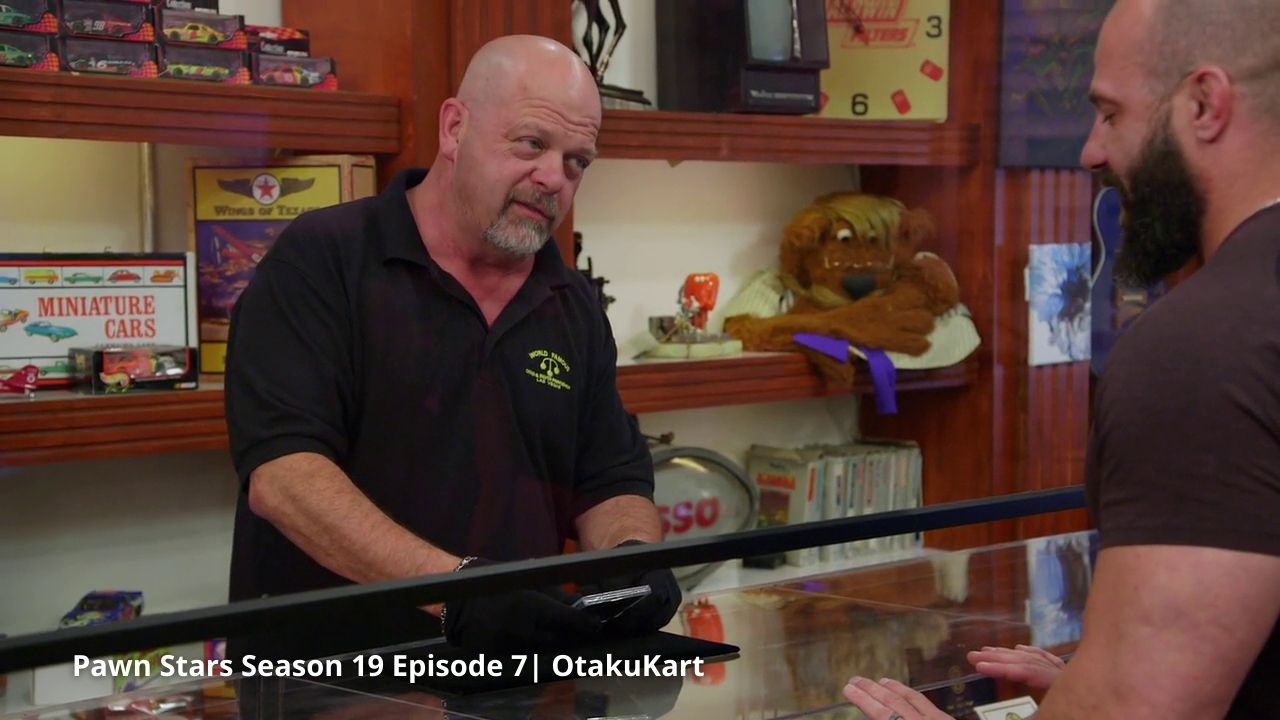 Pawn Stars Season 19 Episode 7 sees a signed vest coming from a popular television program. So we are looking forward to looking at a happy Chum who would be really interested in buying it. Pop-culture stuff aside, there is an intriguing coin that interests Rick. But he may be on the wrong path with Corey when it comes to buying. It’s not new, as the duo also had a bet on a Billiard set that walked into the shop recently. Rick bailed out by asking for a pool competition instead.

Apart from the Billiard set, a customer saw an unexpected deal coming at her a very good price. Thanks to a Delacroix sketch she brought. Then there were customers who were disappointed with their items as they weren’t legit. For example, a supposed 1927 D-Double Eagle Coin had come into the shop. Lastly, Chumlee went all on his own to deal for a 1963 Fiat Microcar. Thanks to Antwaun, who took charge to call Rick instead. So here is a look at what went down recently on Pawn Stars Season 19 before we move to Episode 7.

Previously on Pawn Stars Season 19, a collection of billiard balls opened up the episode. The seller wanted $500 for them. Expert Max took a look at it and instantly stated that they are unique from the color of the numbers. They are usually black. Due to the fact that they are not made of clay, he valued the whole set for $190. Corey, at this point, wasn’t interested in the deal.

Then a customer came in with an art piece she is hoping to be Eugene Delacroix. But more than painting, it’s more of a sketch. Expert Chad looked at it and believed there are thousands of Delacroix sketches, but they are completely different. So he lifted the seller’s spirits by putting at a high amount. Still, she is happy to pay Chum the amount he offered, which is $4000.

Cory spent time training his little brother Jake. A rare 1960s French Horn had come into the shop. Jake plays guitar and knows about the same, so Cory gave him some lessons on French horns and also how to speak to customers. Since there was not much community on French horn collectors, Cory offered a low price, and therefore the customer had to back out.

Next, we had a Gorham Silver Viking Ship coming into the shop. Although the customer wanted more, he came to a deal of $450 with Rick. Then Chum and Antwaun went to look at a 1963 Fiat Microcar. The seller wanted $45,900 for it. Then we had a Shirley Temple Book, an autobiography with her signature. The seller backed out as she thought Rick offered way too low. A couple of stained glasses from Boulder Station Casino came in. The problem is their windows, and people need the right fit. So they were impossible to sell, and Rick had to back out.

A 1999 Tyson Botha Jacket was next. Expert Dan took a look at it and suggested he hoped the fight it was from could be more popular. Corey bought it for $150 despite the fact seller wanted a lot more. Rick and expert Misha came to look at the 1963 Fiat Microcar. After taking a ride in it, the vehicle was smooth, and Misha suggested $30k would be great for it. Rick and the seller couldn’t come to a deal. The episode closed seller wanting $500,000 for the 1927 D-Double Eagle Coin. Unfortunately, it wasn’t legit as the D was added.

Pawn Stars Season 19 Episode 7 will be released on 13 November 2021. It is titled “Pawns of Anarchy”. From the title of the episode, we can guess that it takes inspiration from the FX show Sons Of Anarchy. The official synopsis of the episode has the same to offer because a signed vest from the show is coming into the shop. Apart from that, we are also in for a pretty stellar coin that Rick is about to grab. Also, we may see Rick and Corey at crossroads with each other in the coming Episode 7 of Pawn Stars Season 19.

Shawn Rhoden Girlfriend: Who Is The American Bodybuilder Dating In 2021?

Patricia Karvelas Partner: Is She Married?