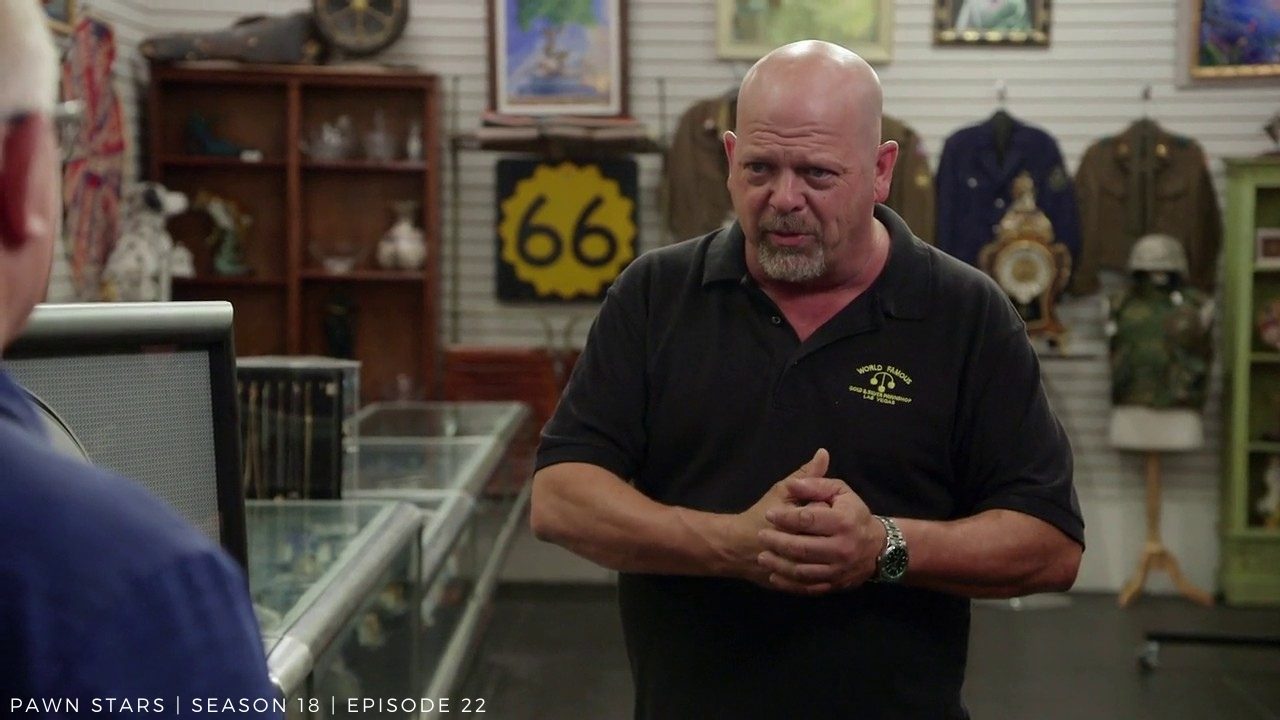 Pawn Stars Season 18 Episode 22 might be Rick’s big day. At least that’s what the episode teases. Recently on the show, the stars had to pass on a number of deals. The reasons vary from item to item. Some are just not really collectible while some may just lie there around for the rest of the years before they actually sell. Then there are some that are way too costly. So Rick doesn’t have much knowledge about them and he won’t take a risk to pay that much amount on something he doesn’t know about.

So recently on the show, we had a drumhead coming from a legendary and one of the most iconic Rock bands. The price asked for and its value stumbled. Then Corey and Chum gambling with a really popular Marvel comic book. Three of The Seven Dwarfs from Snow White and The Seven  Dwarfs had walked into the store. An antique medical book and lastly Rick and Chum went to look at Michael Jordan’s Space Jam shoes and witnessed something more than just that. What? Let’s find out.

We opened up with a customer bringing in a drumhead signed by legendary rock band member Bon Jovi. The customer wanted around $12,000. Steve Grad pointed a few things about the drum set and valued it down and Rick bought it for $1275. Next to walk in is one of the previous customers Spencer who brought another bunch of random stuff. These include the comic The Incredible Hulk and now The Wolverine which Corey bought for $600, Presidential Playing Cards for $800 and Vietnam Green Beret, they ignored it. Next, a Superbowl XXXVII hat came walking in but the deal for it didn’t work out.

Steve Houston later approved the Incredible Hulk comic and Corey and Chum can actually make a profit out of it.Next, a man bought pencil holders of Disney’s three awards from The Snow White and Seven Dwarfs. The missing four dwarfs concerned Corey. Expert Rob guided Corey and he believed he will have a hard time selling them. So Corey passed on them.

Next, a woman walked in with a 1975 antique medical book. written by Physician Robert Whytt to King George. The customer wanted $2500 and expert Rebecca valued it to $3200. Corey locked the deal and also asked the customer the secret price she paid it for which was just $1. Lastly, Chum took Rick to a warehouse in California full of sneakers. The fact they have shoes that Micheal Jordan actually wore in the original movie of Space Jam attracted them there. But the store had more than that.

So, coming back to the sneakers, Chum called expert Yeezy Busta. He priced the other iconic shoes at their right price. Coming to Michael Jordan’s shoes, he believes they could go for $1 million. But since Rick doesn’t know much about shoes, he wanted to pass. Instead, he got his eyes on Paris Shoes and bought them for $62,000.

Check out one of the clips from Pawn Stars Season 18 Episode 21 below.

Pawn Stars Season 18 Episode 22 is releasing on August 22, 2021, and will air on History Channel at 10 pm ET.  Expect new episodes every Saturday following the twenty-second until the eighteenth season of Pawn Stars wraps up. You can also watch Pawn Stars Season 18 Episode 21 on the official website of History Channel and video-on-demand services of Amazon Prime, VUDU, iTunes, Google Play Movies and TV, Microsoft, and YouTube TV.

Pawn Stars Season 18 Episode 22 is titled, “Rick’s Big Triumph”. Well, the title says a lot, and the official synopsis says a chandelier made out of KFC buckets is about to enter the shop. Thus lighting up the already bright shop but will it on the profit of Corey is the question. Rick is busy trying as he is hyped for a very special motorcycle while Chum is working on a deal for a Teddy Ruxpin doll. Lastly, a very eerie doll has walked into the shop. Corey is terrified by the fact that the doll has quite a resemblance to Chum. Thus it makes it creepier for him to buy.

Where is Cleopatra Filmed? Location of Shoots!