‘Paranormal Activity Next Of Kin’ Ending Explained: What Happens In The End?

Paranormal Activity Next Of Kin is a horror movie with an ending that leaves the audience awestruck. Let's dig deeper into the ending. 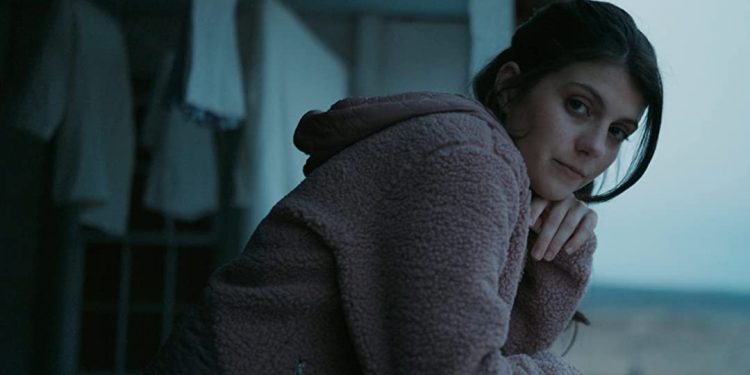 Margot from Paranormal Activity Next Of Kin

Paranormal Activity Next of Kin’s Plot: What Happens In The Amish Settlement?

Margot and her boyfriend Chris want to make a documentary on Margot’s childhood and past. Sarah, her mother, abandoned her outside of a hospital. Margot is still disturbed by security footage of her mother abandoning her. She is perplexed as to what drove Sarah to make such an extreme step. In the present, she encounters Samuel, a blood relative who reaches out to her. Dale, the sound guy from her crew, enters shortly after in the movie. He claims to have had COVID five times. While Dale is shown to be a funny guy who makes obscene jokes, Samuel brings them to Belier Farm, a small Amish settlement where Sarah, Margot’s mother, grew up.

Sarah’s father greets the crew and accommodates them in a shabby, cobweb-infested room. This is where the movie gets spooky. Margot wakes up late at night to see red lights moving in the distance. When Margot asks Samuel about the lights, he gives her vague answers saying it could be a bear.

The crew gets along with the local kids and nuns, but they all seem to be hiding something. The place is very mysterious. Margot was duped by the cult, who lured her back not to reconcile with her family but to be sacrificed. The devil is supposed to transfer from her decomposing mother, Sarah, to Margot via an arcane ritual under the church.

Who Is The Prince Of Demons?

The group discovers goes to the church, about a mile away from the home. They go there while checking out the drone. The church is shut, and the words “thus far not further” are inscribed on the door in German. At the barn, Margot and the team come across a weird rite involving a two-headed goat.

Margot and Chris break into the church and discover weird murals depicting a demonic creature named ‘Asmodeus,’ who is the prince of demons. They find images of ritualistic sacrifices etched on the floor. Chris discovers a hidden room beneath the altar after digging a little deeper.

Margot takes advantage of the opportunity and asks Chris to help her discover further. She goes down the abyss but panics and calls for help after hearing a strange noise in the night. Chris watches the video again in their room and recognizes the noise to be of an animal. Things get nastier and nastier from here on. The audience is left with a feeling of horror and curiosity.

Also Read: ‘The Old Guard’ Ending Explained: Forever is Harder than it Looks!

What does this cult actually want from Margot? We learn that the cult has been employing bewitching to keep the demon Asmodeus’ essence inside the bodies of Margot’s relatives. That’s what happened to Sarah, Margot’s mother, whom she discovers in a frightening cavern beneath the spooky cathedral. Each woman serves as a type of receptacle to confine Asmodeus, and the intention is for Margot to be the next one.

Chris and Dale, Margot’s friends and crew, try to save her from the rituals. During the process, they accidentally break the seal that keeps Asmodeus trapped inside Sarah’s body. That lets the demon loose on the world. With the demon being on the loose, it just takes seconds for its power to drive the locals insane. They begin murdering each other and themselves. They burn everything on fire, the livestock flees, and other such apocalyptic events occur. Dale is slain in this massacre.

Chris and Margot appear to be escaping in the last minutes of the film, but the demon takes possession of Margot’s young cousin Samuel. He makes the cops shoot themselves in the head before snatching their car and fleeing, possibly in pursuit of Margot.

Given the loose ends at the end of Next Of Kin, it’s plausible that the film may reboot the Paranormal Activity franchise into a continuation that picks up where this one leaves off. Margot will probably continue to be pursued by Asmodeus. The demon, anxious to stay on Earth, may stalk additional individuals outside of the Amish community where it was once confined.

Top Eight ‘Comedy K-Drama’ That are Funny From Day One!