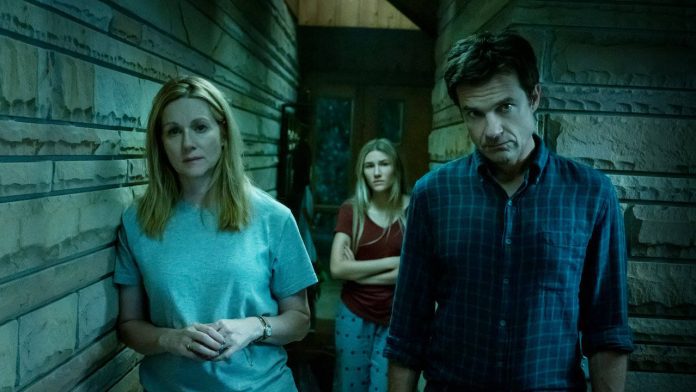 Ozark: an American crime drama is a Netflix original series. Ozark revolves around Marty Byrde, Wendy Byrde, and their family. Each season, the Byrdes dig themselves deeper into the hole. The family is mainly involved in establishing money laundering operations and doing business with drug mafias. The first season aired in 2017, with each consecutive season following a year later. The series had a great cultural impact. According to a November 2017 assessment, the series increased visitation and reputation of the Lake of the Ozarks. A restaurant called Marty Byrde’s was also trending which could explain the craze of Ozark among the fans.

Season 4 of Ozark unpretentiously takes up where Season 3 left off. The Navarro sent the Byrdes back to Missouri to prevent Darlene from resuming her heroine business. Things do not go as they planned. The plot of Ozark season 4 appears enticing and fans are desperately waiting for Ozark Season 5. Although the Plot of Ozark Season 5 is not yet Known.

Many of the old favorites will return to our screens in Season 4. Ozark’s primary ensemble will all return for season four, including Jason Bateman as Marty. Wendy is played by Laura Linney, Ruth is played by Julia Garner, Darlene is played by Lisa Emery, Charlotte Byrde is played by Sofia Hublitz, and Jonah Byrde is played by Skylar Gaertner. The cast of Ozark Season 5 is still not known and it can’t be predicted if we will be able to see the same old cast.

The tax benefits were granted by the state of Georgia. The majority of the filming venues are in the Atlanta region, at Lake Allatoona and Lake Lanier, rather than at the Lake of the Ozarks. After thoroughly researching the Alhonna Resort location, the film crew built a set in Georgia. Some parts are shot on-site in Chicago. Savannah, Norcross, Johns Creek, and Peachtree Corners were also used as filming sites for the series.

For the first three seasons, Ben Kutchins was largely in charge of cinematography. For season one, they used the Panasonic VariCam, then switched to the Sony Venice for season three. The fourth season began filming on November 9, 2020 and ended on October 8, 2021. For Ozark Season 5,  the filming location is yet to be decided.

Ozark Season 5: When Can The Fans Expect?

Jason Bateman appeared on Jimmy Fallon’s show. He stated, “We’re going to do 14 episodes instead of 10, and we’re going to break them up in two, so it’ll be seven and seven”. Since Ozark Season 5 has two parts. It can be assumed that Ozark Season 5 may not happen. Ozark Season 4 part 2 might be the end of American crime drama.

Marty and Wendy are shown in the season 4 trailer attempting to strike an immunity agreement with Navarro and the FBI. It can be seen that a warning is being issued from a Mexican drug gang to Darlene. As of now, Ozark Season 5 trailer is not available. Fans may expect Ozark Season 4 part 2 trailer very soon since season 4 is being divided into 2.

The release date of Ozark Season 5 is not yet confirmed. Although Ozark Season 4 part 1 is released. The fans can go and watch their favorite Crime drama on Netflix.

Also Read: Bong Joon Ho To Unite With Robert Pattinson For His Next Project At Warner Bros.