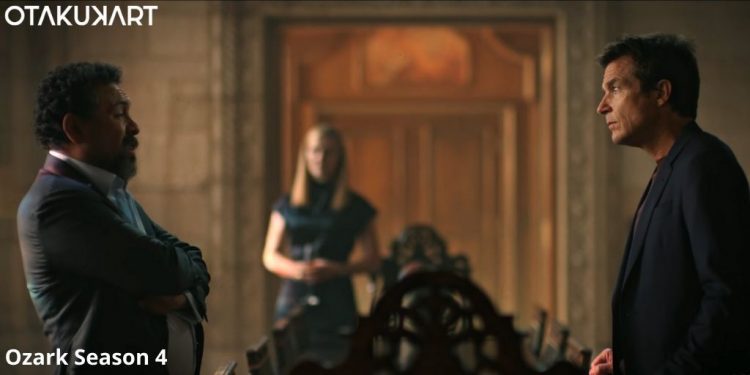 The fans are in for a treat this month as they will witness the release of Ozark Season 4 Episode 1. The popular crime drama thriller has made the fans wait for quite a long time since the third season came out almost two years ago in the year 2020. However, like every other series out there, Ozark also suffered several delays due to the pandemic that affected the world.

However, the show has finally come out with an intriguing trailer and is set to make a comeback this month. The previous season had a lot of amazing moments and shocking surprises. In addition to that, we saw how Wendy’s hunger for power and control got her and Marty into bigger troubles. On the other hand, the season also ended on a seriously shocking note that had fans getting eager for the fourth season. The Netflix original has managed to impress a whole lot of viewers all around the world.

Additionally, the show has also impressed the critics with its fascinating character developments and amazing storyline. The popular American writer Bill Dubuque has created the show along with Mark Williams. Meanwhile, the show stars Jason Bateman as the main lead along with other popular stars in prominent roles. The viewers are now very much eager to watch Ozark Season 4 Episode 1. But first, let us take a quick recap of Season 3 to get up to speed before heading into Season 4.

The third season of Ozark dropped on 27th March 2020 on Netflix with all the episodes together. With a total of ten episodes in the season, the show gave a lot of moments to take in that stayed with the fans. The season saw another war brewing in Mexico between Marty’s employer and a rival cartel that worries Marty. Whereas Wendy was thinking the opposite proposing that the war might actually be beneficial for them and open new businesses and expand.

Meanwhile, Ruth was now working as the Casino manager and serving as the right hand to Marty. However, things got out of hand between her and Frank Cosgrove’s son Frank Jr. which Marty had to handle with Cosgrove. Coming back to Wendy and Marty, we saw the couple fighting a lot and taking therapy which seemed to bring no result as Marty was bribing the therapist to take his side. Meanwhile, Wendy thinking that she had the right ideas, met with her boss Omar Navarro through Helen.

Wendy proposed her idea of the business expansion, and Omar agreed. However, Marty didn’t want Wendy to succeed and tried to sabotage the deal. But Wendy had learned to play dirty and eventually got the new Casino up and running. Although, the new Casino expansion attracted attention from the FBI. Moreover, it made it difficult to launder money now as they put up an audit. Things get more difficult when the FBI agent Maya Miller gets involved in the audit. On the other hand, Marty discovers Wendy’s late-night talks with the boss Omar, but Omar also finds out Marty listening to their conversations.

Therefore, he abducts him and gets him to Mexico. However, Omar realized that Marty does have a talent when it comes to handling finances and laundering money. So he sent him back to his family. We then got another character named Ben, who was Wendy’s younger brother and the cool uncle to her kids. Meanwhile, the kids had progressed pretty well in the season as well. Whereas Darlene and Wyatt getting intimate in the season was another shocker.

Coming back to Marty, he got an offer from Maya to work for the FBI after going to prison for 18 months. But Marty had a different idea that Maya didn’t agree to. On the other hand, Ben and Ruth fell in love, but after Ruth became a victim of Frank Jr.’s brutality, it upset Ben. Therefore, he first made a scene at Wendy’s fundraiser and later made a scene at Helen’s house telling her daughter that she works for the cartel. Wendy realized that this might get Ben killed, so she set out with him to get him somewhere safe.

However, she later realized that she couldn’t save him, so she unwillingly left him to die at the hands of Helen’s killer. Ruth left Marty after learning that Wendy left Ben for dying. Whereas, Wendy’s son Jonah puts a rifle to Helen’s face only to learn that it was Wendy who left his uncle to die. Later on, Helen set up her own plan in motion to throw Marty and Wendy out of power and become in charge. But in the end, in a shocking turn of events, Omar kills Helen instead of Marty and Wendy in front of them. Meanwhile, Marty and Wendy now find themselves deeper in the mess with Omar.

Also Read: Every Netflix Original Coming Out In January

“Ozark Season 4 Episode 1 will release on 21st January 2022 at 3 am ET, 12 am PT, and 1:30 pm IST on Netflix.” Meanwhile, the episode will be titled “The Beginning Of The End”. However, this won’t be the only episode to premiere on the day. The show will come out with seven episodes in total altogether on 21st January 2022. So stay tuned to find out what happens next in Season 4.

The crime drama thriller is set to make a comeback with the latest fourth season. This has got the viewers excited, and they are wondering about where to watch Ozark Season 4? The answer to that question is quite simple. “Ozark Season 4 will be split into two parts, and Part 1 will drop on 21st January 2022 at 3 am ET on Netflix in the United States.” Meanwhile, the audience in India can stream the first part at 1:30 pm IST on the same day. Meanwhile, the viewers in the Pacific Time Zone can watch the show at 12 am PT on Netflix on 21st January 2022 as well. Furthermore, Ozark Season 4 will consist of 14 episodes in total equally split in Part 1 and 2.