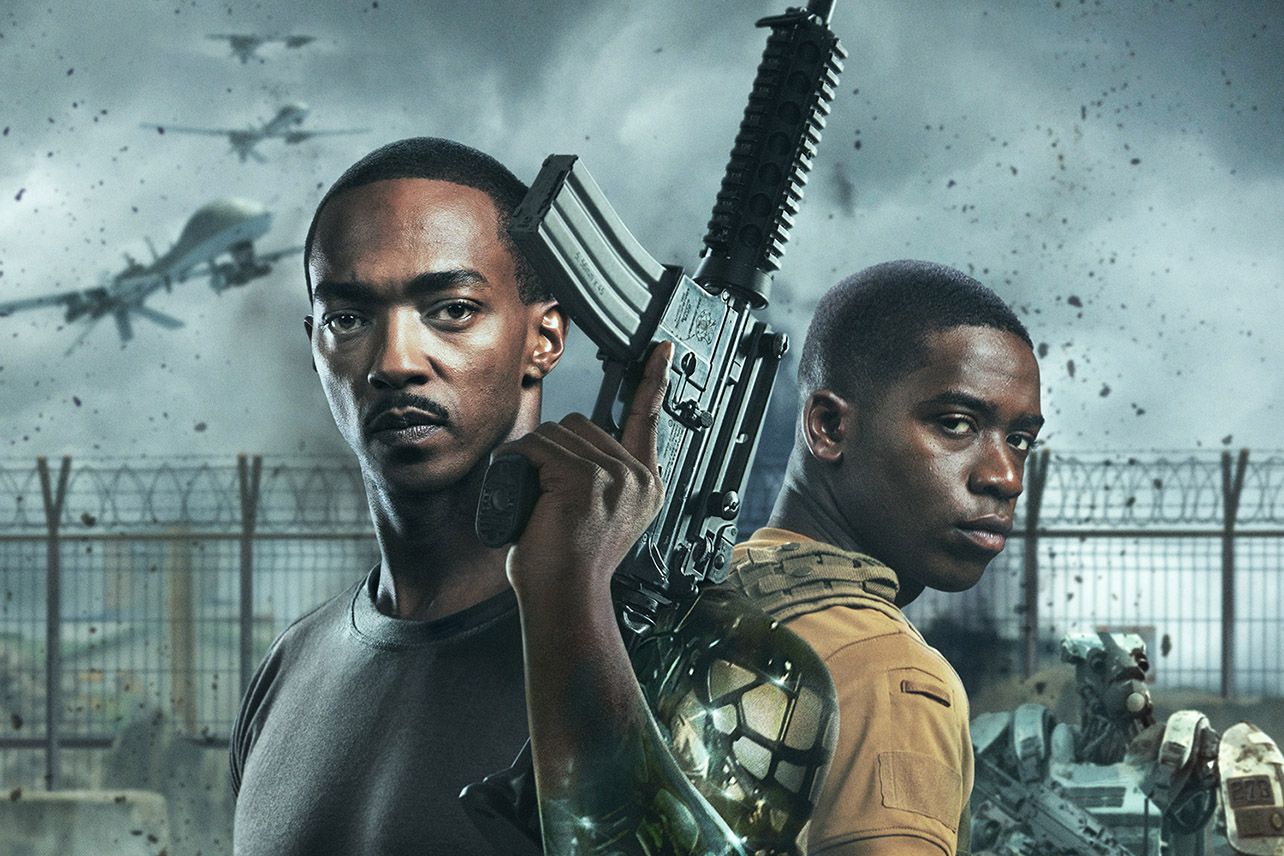 Outside the Wire is a 2021 sci-fi action film. It’s directed by Mikael Håfström and the screenplay is co-written by Rob Yescombe ana’s Rowan Athale. It’s based on the story by Rob Yescombe. Lorne Balfe has composed the music for the film. Michael Bonvillain is at the helm of cinematography while Rickard Krantz has edited the film. The production companies behind the project are Automatik Entertainment, 42 Films, and Inspire Entertainment. The film was released and distributed by the streaming giant Netflix. Outside the Wire stars Anthony Mackie (Avengers: Endgame; The Falcon and the Winter Soldier) in the lead role. He stars in the lead role along with Damson Idris (Snowfall). Anthony Mackie also serves as one of the producers of the movie.

The film’s announcement came back in June 2019, with Anthony Mackie starring and producing. Mikael Håfström was roped in to direct the film. Later on, Damson Idris and Emily Beecham also joined the cast. Michael Kelly and Pilou Asbæk also hopped on not too late. The principal photography for the film began in August 2019 around Budapest. The filming wrapped in under 8 weeks. It finally hit Netflix on January 15, 2021. It also went on to become the most-streamed movie during its debut weekend. Anthony Mackie stars as Captain Leo who is an android military officer. Damson Idris plays Lt. Thomas Harp who is a drone pilot and joins Leo on a mission together. Emily Beecham stars as Sofiya and Michale Kelly play Colonel Eckhart. Pilou Asbæk stars as Victor Koval and Kristina Tonteri-Young plays Corporal Mandy Bale. Bobby Lockwood plays Reggie and finally, Elliot Edusah plays Adams. 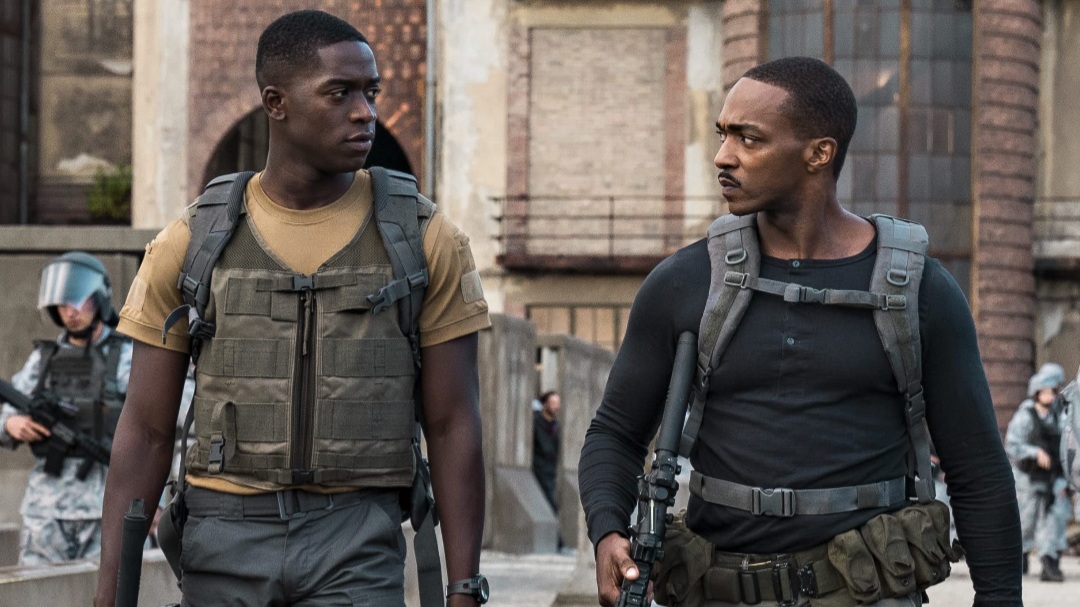 Anthony Mackie and Damson Idris star in the lead in Outside the Wire (2021).

Introduction to Harp and Leo

The film is set in the future during 2036. There is an ongoing civil war in Ukraine between the pro-Russian insurgents and the local resistances. The civil war results in the United States deploying its peacekeeping forces. One of the ongoing operations sees a team of US marines and the robotic soldiers (called “Gumps”) getting ambushed. Drone pilot Lt. Harp disobeys order when he deploys a Hellfire missile in a drone strike, retaliating to the enemy. The drone strike results in two marines dying and about 38 others being saved. Following this, Harp is punished and sent to Camp Nathaniel. The camp is the US base of operations in Ukraine. There, Harp is assigned to Captain Leo who is masquerading as a human officer. In actuality, he’s an experimental and highly advanced android super-soldier.

Afterward, Harp and Leo embark on a mission. The terrorist Victor Koval seeks to gain control of nuclear missile silos under the facade of delivering vaccines to refugees. Harp and Leo are out to stop him from acquiring the network of Cold War-era missile silos. On their way to the mission, they encounter an attack on a friendly aid truck. They head out to the reported attack and engage. The engagement leads to a confrontation between the marines and the locals. When a Gump shoots a local for throwing rocks at the Gump, Captain Leo tries to reach a peaceful negotiation. He decides to give the aid truck to the locals. However, they’re soon ambushed by the pro-Russian insurgents. This leads to a firefight, and Harp and Leo have to reach the refugee camps on foot.

Confronting the Enemy and a Twist

When they reach the refugee camp, an insurgent attacks Harp and Leo, shooting at them. The attack kills some of the civilians in collateral. Leo captures the insurgent and tries to extract information by torturing him. He then leaves him to the civilian mob that had gathered there. Harp and Leo then meet Sofiya who’s their contact and a resistance leader. Sofiya takes them to an arms dealer. He has the information regarding the location of the back vault that contains nuclear codes that Koval is seeking. The duo then heads off to the bank. They are confronted by Koval’s forces that also include Gumps. Harp helps in the rescue of the civilians that get caught in the crossfires. Meanwhile, Leo manages to acquire the nuclear codes, but cannot find Koval. That’s when Eckhart orders a drone strike which decimates the bank and other buildings. The military now believes that both Koval and Leo are dead. However, Leo is not destroyed and Harp reunites with him. This is when the plot takes a turn and Leo outs his real intentions. He tells Leo that he has been manipulating him to help him evade the supervision of military command. He also tells him about his real plans for the nuclear codes. Leo then knocks out Harp who is later picked up from the side of the road by Sofiya’s men. Leo then goes on to meet Koval and give him the codes. He then asks Koval to give him access to a nuclear missile silo. Koval, however, refuses to give him access and Leo kills him.

Harp informs his commander about Leo’s actions and his plans. Realizing that Leo is planning to launch the missiles at the US to put an end to their future war expeditions. Harp then volunteers to go to the silo and stop Leo. He infiltrates the silo and manages to successfully disable him. However, before he can disable him, Leo has already initiated a missile launch. A drone strike destroys the silo before the missile launches. Harp manages to evade the silo before it’s destroyed by the drone strike. Leo also gets destroyed along with the silo. Harp then returns to the Camp and is praised by the commander. The film ends as Harp leaves the base for his home.

Outside the Wire Has a Competent Star Cast but Suffers Narratively

Outside the Wire has two protagonists that act contrarily to their innate nature. Leo, despite being an android, seems and acts human-like. While Harp has become a much more cold and calculated man, relying on the rationale when making important decisions. Leo, played competently by Anthony Mackie, is much more humanly emotional than Harp. It’s his goals that resemble that of a human’s motivation. Harp, meanwhile, is a soldier that follows efficient rational decisions, even if they leave some soldiers dead.

Both Anthony Mackie and Damson Idris olay their parts with satisfactory competence. The other actors in the movie do a good enough job as well. It’s the narrative and the plot, however, which doesn’t feel congruent with the acting from the cast. The story of the film is generic and drab. Character development, dialogues, and plot are all nothing that’s out of the ordinary. It feels like the frail narrative is only there to serve as a propellant for action set-pieces. The action is executed properly but not good enough to compensate for the terrible story or narrative.

Outside the Wire is a Disastrously Written Big-Budget Action Spectacle

The message that really would have made the film interesting is confined to a short-lived exchange at the end. There’s something to be said about America’s war efforts and presence in the countries. But so less of the time is devoted to that it leaves a very poor taste. A message like that is just there to explain a character’s motivations. But it’s not expanded or built upon at all. It’s an android that is more human-like in its response to conflict and war. And that’s something which could have been tussled with — a machine trying to put a stop to war and conflict. But unfortunately, that’s not the objective here. The objective here is to make a popcorn action flick that uses war as a tool to have action sequences. Although the fight sequences are good, the mobile lacks narrative.

The saving graces (for those who don’t mind the film) would be the action sequences. Those combat scenes are somewhat creative and enjoyable. But when it comes to the CGI, it’s nothing special. The villain is also pretty lame and bland. The concept of an emotional cyborg and a cold human has potential. So does the message that the film tries to barely touch upon at the end. However, the film fails on delivering on the potential and instead, renders its runtime as a collection of action sequences. Also, the action sequences are not all that great either.

You can stream Outside the Wire on Netflix.