After making a scene at the party Woong realizes his mistake and agrees to work with Nu-Ah. Also, the artist will compete against Nu-Ah with a 100 hour drawing. 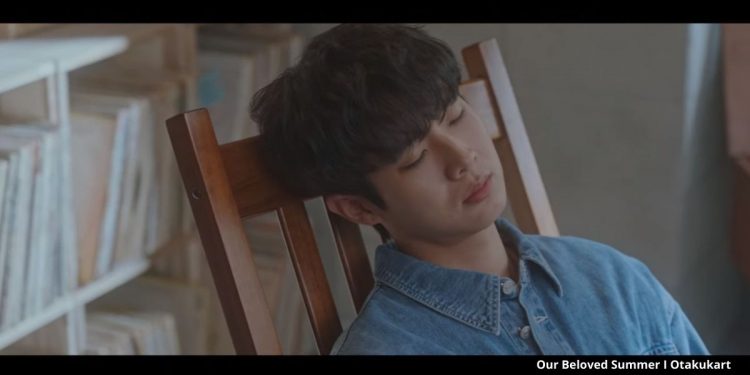 After a big lash out at the Soen shop opening party Woong realizes that he is in the wrong to blame Yeon Soo for everything. On the other hand, Yeon Soo thinks that it is her fault that Woong is hurt. To correct her mistake, Yeon Soo directs Mr. Jang to apologize to the artist as he has been insensitive towards K o-o’s hard work. The next day, she keeps calling to apologize, but Woong ignores her calls. In ‘Our Beloved Summer’ episode 7, we will see that Yeon Soo has again started caring for Woong.

Also, Woong has a meeting with Mr. Jang to clear up the matter and agree to work with Nu-a. A personal question is also involved, but Mr. Jang straightens up his stance, saying he likes Yeon Soo just as a business partner. As the deal is finalized, Ko-o makes a project plan to complete his drawing in 100 hours. Keep reading to find out if Ko-o makes the deadline.

Till now, we have seen that Nu-Ah has made allegations of plagiarism on Ko-o. Even though we don’t know the past relationship of Woong and Nu-a, we can say that they ended on bad terms. In the first meeting with the Soen Shop owner Woong is not prepared to counter the allegation. Still, in the end, Mr. Jang counts on his word. Later, at the opening party, Woong is shocked to see Nu-a. When he finds out that Nu-a will also be working on the Seon Shop project, he is ready to back down.

After watching this incident, Ji Woong reminisces about his past with Woong and how they became friends. Even as children, they used to have a very special bond. Woong would share everything with Ji Woong as if they were brothers. After Woong leaves the party, Yeon Soo confronts Mr. Jang, but his perspective of including Nu-Ah is only publicity. Even so, Yeon Soo makes it clear that Do Yul (Mr. Jang) will have to apologize to Woong.

Also Read: ‘Semantic Error’ BL: Everything You Need About The K-drama!

Woong Will Work With Nu-Ah

The next day, everyone is upset about what happened at the party. Yeon Soo even decides to visit Woong to apologize, but she changes her mind. On the other hand, K o-o’s manager Eun Ho doesn’t even know the actual matter. Still, he starts a fight with Woong for not taking him to the party. Later, he clears up things saying that he knew about the drawing competition with Nu-Ah. The reason he agreed to it is that it will resolve the Plagiarism allegations.

Confused about his feeling Woong ignores Yeon Soo’s calls all day, then Ji Woong confronts him about still having feelings for her. At night as Sol Yi loses a big booking at the pub, so Yeon Soo tries to help her out, but two unexpected guests arrive. Woong and Eun Ho are informed about the shooting at the pub, and they are expected to be there. Will Yeon Soo and Woong finally solve things between them?

At the pub, Woong acts very maturely and apologizes for his behavior the other night. Also, he agrees to work with Nu-Ah on the Soen shop project. Still, for the first time, while talking to Woong, Yeon Soo feels like something is out of place. The next day Ko-o sent his proposal to Yeon Soo’s team, claiming that he would work for 100 hours on the project and would record the whole process. Will Woong be able to complete his work at the given time?

The ‘Our Beloved Summer’ episode 7 will be released on 27th December 2021. In the upcoming episode, we will see Woong presenting the drawing that took him 95 hours to complete. Also, we find out that Mr. Jang likes Yeon Soo as a business partner, but Ji Woong still has feelings for Yeon Soo. Will Yeon Soo and Woong get back together?

Where To Watch ‘Our Beloved Summer’ Episode 7?