'Our Beloved Summer' episode 1 is announced. After parting on bad term the couple meets again as Choi Woong is the author of the book Yeon Soo is working on. 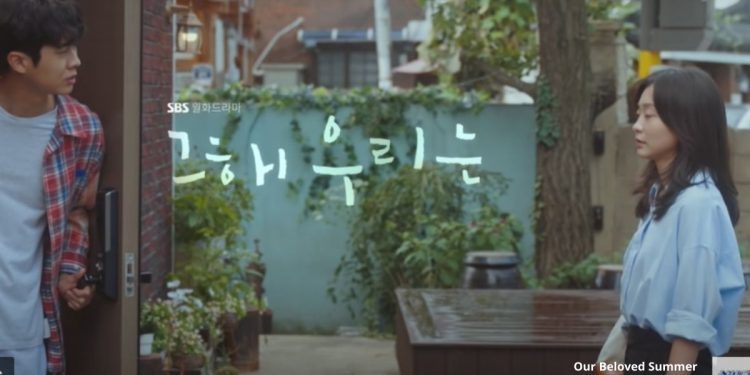 ‘Our Beloved Summer’ is the second project that Choi Woo Shik and Kim Da Mi are doing together. They were first seen in the Korean film ‘The Witch’. Later, the actors were acknowledged for their skills and were offered the lead roles in projects like ‘Parasite’ and ‘Itaewon class’. After the release of ‘Our Beloved Summer’ Episode 1 preview, many people are intrigued by the relationship of the characters Choi Woong and Gook Yeon Soo. The couple breaks up saying the time they spent together was awful and they shouldn’t meet again.

However, they are brought back together because of a documentary they shot 10 years back in high school. ‘Our Beloved Summer’ drama is directed by Kim Yoon Jin. He is famous for projects like ‘A Promise’, ‘Wild Card’, and ‘Divine Sword’. The drama is also known as ‘Us That Year’. ‘Our Beloved Summer’ is a romantic comedy and a lot of fans are looking forward to the episode 1 release. Let’s find out more about this upcoming drama.

The trailer of ‘Our Beloved Summer’ Korean drama was released on 25th November 2021. Even though fans knew the star cast will include Choi Woo-Shik and Kim Da-mi watching them together in the trailer gives us different feels. The trailer was released on Youtube as well as Netflix. Though the trailer is just 38 seconds it gives good insight into the storyline of the drama.

The trailer starts with Gook Yeon Soo asking Choi Woong what will happen if they really break up? Choi Woong loves her very much and never wants to be abandoned by her. Their love is like the first flower in spring which blooms beautifully. Still, their happiness is short-lived as Yeon Soo breaks up with her school love. We’ll come to know the reason behind the breakup in ‘Our Beloved Summer’ Episode 1.

After the breakup, Choi Woong worked hard and became successful whereas, Yeon Soo is an office worker who struggles to make a living. Neither of them ever thought they will cross paths again but destiny has something else planned.

The ‘Our Beloved Summer’ Episode 1 preview was released on 29th November 2021. The 40-second video tells us a little about Choi Woong and Gook Yeon Soo’s relationship in school. Also, we get to know exactly how did they meet again after their breakup.

In the trailer, we see that Gook Yeon Soo is a company employee and she is working on a book. When she gives her presentation to her superiors, they ask to meet the author. When Yeon Soo finally tracks down the author she visits him at his place. As the door opens she sees a familiar face. The author of the book that Yeon Soo is working on is Choi Woong.

Later, Yeon Soo is struggling as seeing Choi Woong brings up a lot of emotions. She had no idea that the person she broke up with will come into her life again. There are flashbacks where we can see Choi Woong saying that Yeon Soo has a different side that is unknown to others.

The couple went from hating each other in school to being love birds as adults and in the end, they are nothing but strangers. As fate brings them together again they wonder why they keep bumping into each other. Yeon Soo needs Choi Woong’s help but he has a condition. He makes a deal to help her only if she shoots a one-month documentary with him.

The actors Choi Woo Shik and Kim Da Mi are known for their roles in ‘Parasite’ and ‘Itaewon class‘. Their new drama ‘Our Beloved Summer’ Episode 1 Release Date is 6th December 2021. Choi Woong and Gook Yeon Soo had a complicated relationship in the past. After living apart for a long time they finally meet through fate.

Where To Watch ‘Our Beloved Summer’ Episode 1?

The Korean drama ‘Our Beloved Summer’ Episode 1 will premiere on 6th December 2021 and new episodes will be released every Monday and Tuesday. This is a television series so people living in South Korea can watch the drama on the official broadcast network SBS. Whereas, international fans can watch ‘Our Beloved Summer’ on Netflix.

Who is Kal Penn? All About Him And His New Book!