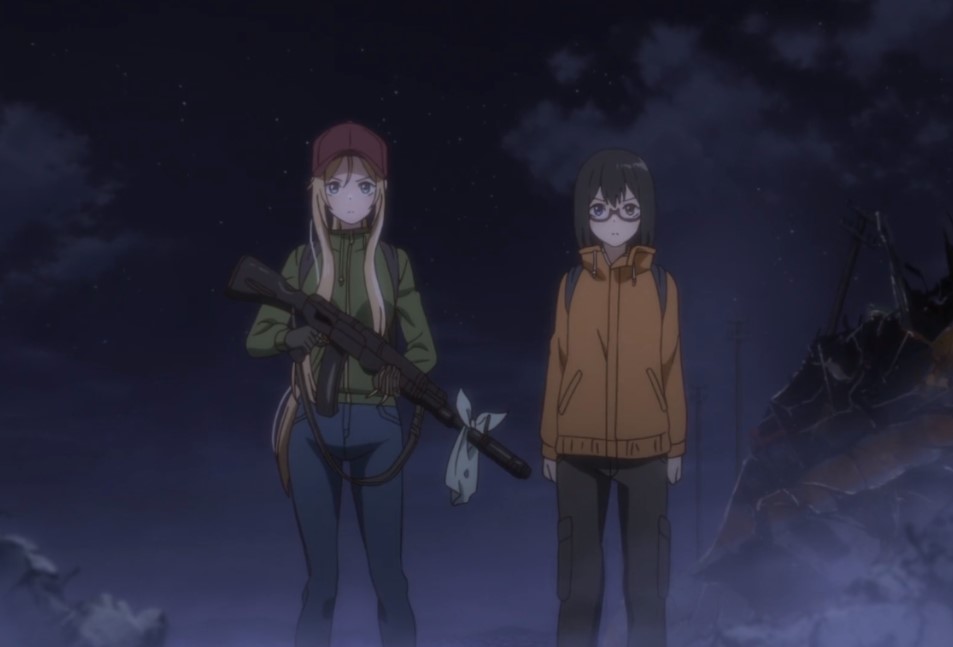 From the latest development of the Otherside Picnic, the trio went to the Otherside and saved Akira. They battled with mysterious monsters and made it back. In the morning, Nishina and Sorawo visited Kozaharu. Kozaharu told them that they must not be thinking about going to the Otherside. Nishina told Kozaharu that they need her help they want to rescue the U. S army. Nishina feels that she cannot abandon them.

She realizes that the U.S army saved them from being devoured by monsters at the Otherside. Kozaharu decided to help them, and she gave them a map that leads them to the Otherside. She told the two that they have visited that Otherside many times; that’s why their path is blocked. Sorawo reveals about the magical hat that will help them get there. Kozaharu notices that the hat will help them and advices them on what to do.

Kozaharu realizes that she is scared ad decides to let the two go alone at the Otherside. She left them, and Sorawo wears the hat. She thought that it is not working since they are still in the real world. They both headed out and started talking about the Otherside. Sorawo comments that she will never go to the Otherside during the night. Suddenly the weather changed. Everything becomes darker, and they find themselves in a forest.

Sorawo realizes that the magical hat has started working, and they are teleported to the Otherside. They find the machine guns and wraps them with a white veil. Sorawo is worried that when the soldiers see them carrying guns, they won’t hesitate to shoot. They will think that they are under attack, but Nishina has the plan. They both saw the train station and heads there. But they hear the sound of guns, and they both take cover.

Nishina raises her machine gun, but the white veil got shot in pieces. Sorawo realizes that what she has been afraid of is happening. Nishina plays an SOS code, and Sorawo asks where she learned that. Nishina replies that she learned it from her mother. She shoots the air and raises her machine gun, showing that they mean no harm. That’s an SOS code, and the soldiers notice that. They stopped shooting since they are not enemies to them.

Sorawo realizes that the SOS code has worked and realizes that Nishina’s mother was a soldier. They both head to where the army of soldiers is. The captain recognized them and said, it is you two again. Sorawo clears the misunderstanding with the soldiers. She leaves that she and Nishina are not monsters, but she just had a blue magical eye. Nishina had a magical left hand due to visiting the Otherside multiples times.

The captain replies that he had found about that a few days ago when the two left. Sorawo is wondering why he was saying, a few days ago. She knows that it is almost half a year since they left the Otherside. Sorawo realizes that the time between the Otherside and the real-world is different. They both heard to the U.S army base. On their way, Sorawo asks about Greg. The captain reveals that Greg has died fighting with apes.

Greg was trying to track the two, but the meat train hits him and dies instantly. Sorawo also shows the soldiers how her magical eye works. She told them that she uses her eye to spot glitches, but the soldiers call the bear traps. Nishina reveals that they are here to rescue them. The captain also reveals about their dying soldiers due to bear trap. They both arrive at the U.S army base and meet with the Major.

The major can’t believe that they have come back. The captain reveals that they are here to rescue them, and it is the girls. He said the girls in English and Nishina and Sorawo are wondering what the girls are. The two understand Japanese but not English. Nishina understands some English words except for the word girls. The Major is happy that they are back and they can return to America.

The captain went with the two out and show them different guns and army vehicles. He left the two trying to prepare for the war. Sorawo notices that Nishina is good with guns and asks if she has learned from her mom. Nishina reveals about her mother being a great soldier. Later they head out with the army and saw a bear trap. Sorawo is using her eye to spot glitches. At a distance, she saw a Karanda mosnter that feed on humans, and it smiled with blood on its teeth.

Preview: Suppose A Kid From The Last Dungeon Boonies Moved To A Starter Town? Episode 12