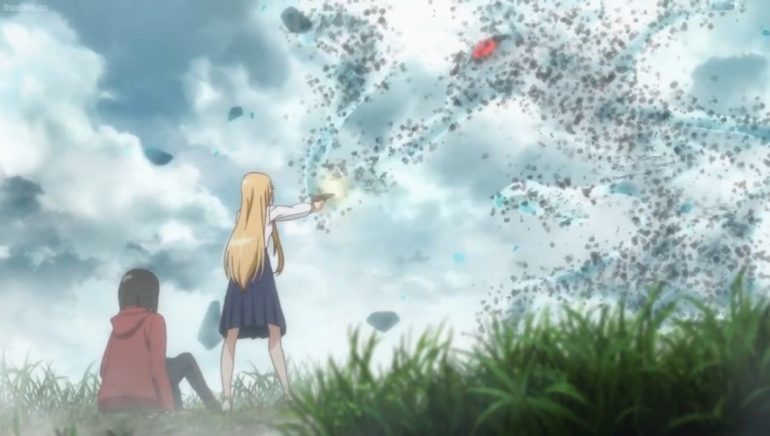 This week we get the season’s first anime episodes with Otherside Picnic episode 1. This anime takes the alternate worlds to different lengths compared to the usual spacetime traveling that we know. It is amongst the newcomers of the season, and it came early. Together with other animes like Gekidol, Suppose a Kid from Last Dungeon, and many more. The early releases of this season are something to look forward to. Even though most anime coming for Winter 2021 are idol based and outnumber the Isekai genre. There is still a lot to look forward to.

We had already got a glimpse of what the anime would be like from the previously released PV when the release date details were released. But seeing it in detail from the episode itself brought more understanding. The anime started like your usual Isekai build up. One of the characters appeared to be drowning in what appears to be a pool of water on the ground. So knowing that they probably won’t make it. They start looking back at their life and anybody else who would worry if they are gone.

Adding more to what would one believe that this would turn out into an Isekai where the main character dies, and they are revived in the new world would be how Sorawo had talked about her life as she is about to die. But things suddenly take a twist. She is in a world where she recognizes someone like her and referred to her as a human. Which would make you wonder what kind of world she is currently in. It became clear at that point that wherever she was, there were other creatures except for humans.

The other person ended up saving her, and. And then we got to learn another mystery about the place they were in. Whatever creature chasing her, she is referred to as a Kune Kune or a Wiggle-waggle. Apparently, looking at it would have you hypnotized, which would probably lead to losing your mind, and that would be the end of you.

As the episode continues, we are getting to know more about this world and the creatures that lie in it. And after defeating the Kune Kune, a mysteriously looking cube dropped off it. Just like how gems spawn when one defeat monsters in dungeon-based animes. What surprised me more about the cube was that it reflects everything else but the person holding it. With this, Sorawo and Toriko Nishina, the girl who saved her, lead back to their normal world.

So in this anime, there are doors that lead people to a different world. Sorano called this the Otherside. Toriko seemed to be familiar with the world, as Sorawo mentioned that she has never encountered a human even though she regularly visits the Otherside. And she also told Sorawo that she has been going there longer than Sorawo, which makes her some knowing it all about how things work over there.

She carries a gun with her, which makes it look like she knows about all the dangers over there. With this, they were now ready to get back to their normal lives. But Sorawo had decided that she is done with these things and didn’t give her contact details to Toriko. But she still managed to track Sorawo to her school and invited her to go back to the other side.

Since the cubes that drop when one defeats the Kune Kune creatures sell at a high price. They decided to go back and collect more by hunting those creatures. It also turned out that there are different ways of getting to the otherworld, and Toriko was a master of this. This time she used a combination of numbers in a lift, which led them to the Otherside again. But as they come across more of the creatures they are hunting. They realized that the method that they thought killed them last time was wrong.

And with this, they seemed screwed as they were both unable to move and succumbs to the creature’s powers. Last time Toriko used a pinch of salt, and they thought that it was what defeated it. But Sorawo did her analysis and realized that if you hit the creature while busy using its powers on someone. Then that is what defeats it, then Torikoshot at it while Sorawo looks at the monster, so it uses its powers at her. And with this, they could get out of their predicament and collect yet another cube from the defeated creature.

The Otherside is mostly ghost towns that are worn down with decaying buildings like humanity used to live there. And they might have been all finished by the Kune Kune creatures, and now they took over the world and freely roams about it. What was surprising a little was when they found a dead man. He seemed to be finished by those creatures as he had some roots crystals growing out of his eyes, which happens if you look at those creatures for a long time. But since not a lot of coming to the Otherside, it appears that several people go over there.

This anime is centered more towards ghost stories and has a little horror and mystery in it. So if that is your kind of anime, then you should definitely try this one out. The anime doesn’t have many characters as it revolves around the lives of Toriko and Sorawo in their Otherside adventures. So if you like following their adventures and finding out more about the Otherside, the upcoming episodes are something to have a look at.

Otherside Picnic made its debut this week and is currently ongoing with new episodes on Mondays. For more details, you can check the full anime post: Otherside Picnic Episode 2 Release Date. It is also streaming on Funimation, AnimeLab, and Wakanim.