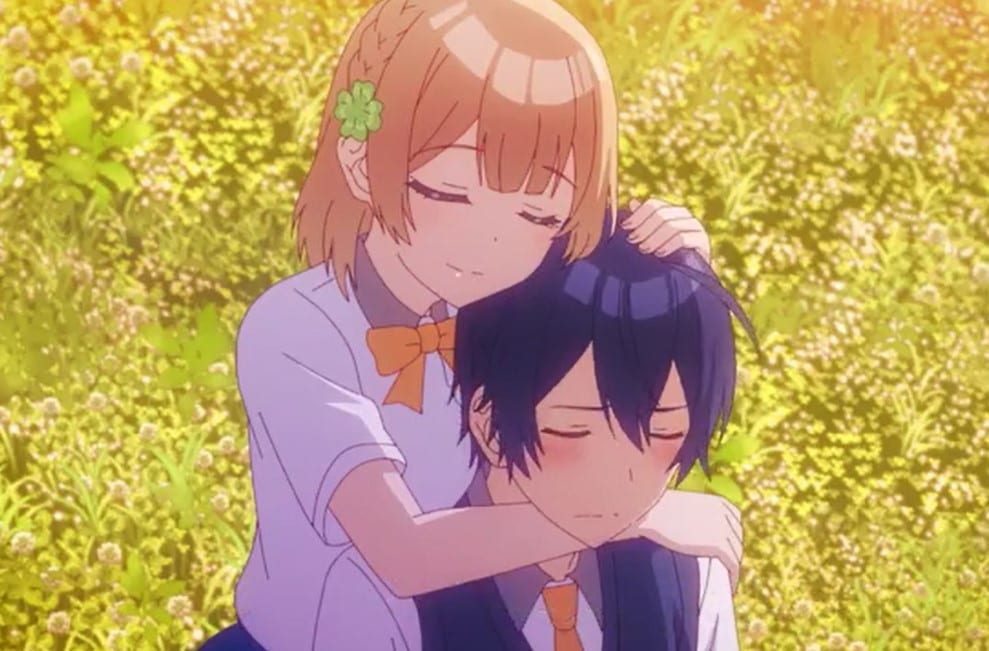 A schoolboy was on his way to school, and he saw a girl of his dream standing alone. He heads there and looks at her. The boy asks if she is Kachi, and the girl replies that he is Maru. The boy reveals that he is Maru Sueharu and asks her how did she know his name. Kachi comments that she knows everyone in their class and their faces. Kachi asks Maru what he wants, or he was talking with her without anything to say. She also told Maru not to take her for a fool since she knows that he want to say something.

Maru started shaking and said he loves reading her novels. Kachi asks Maru to tell her what he thinks about her novels. Maru wonders if this is the moment someone falls in love easily. He told Kachi that her novel moves his heart, and Kachi thanks him. Maru realizes that love is not something you fall into. It is something that develops inside your heart.

He realizes that Kachi was his first love, and he was a victim of love poison.  At school, he met with other boys wondering about the girl that he has recently met. Inside the classroom, Maru heard other boys talking about Kachi. They are carrying Young Journal magazines that Kachi has become popular. Everybody praises Kachi and comments on how gorgeous she is. One of the boys comments that he loves how she looks like she knows she is the hottest thing around.

Kai asks Maru if he will be at the confession festival since he has not got a girl this summer. Maru asks Kai if he will be there, and Kai said he would be there. He told Maru that he is enjoying hitting on seven girls. But he thinks he will dump six of them and remain with one of them. Maru reminds Kai that every girl hated him for what he has done last summer since they have found that he is a playboy. Kai reveals that those last girls he was hitting on were from different schools.

He comments that to this school, he is lower than trash in the hierarchy. Kai saw another two hotties and wave at them. But they realize that it is that guy who wants to taste every girl and show him weird faces. Maru is amazing at how Kai handles that hate and continues to hit on different girls. He asks Kai who he is going to propose at the confession festival. Kai said he would propose Kachi, and Maru gets up. Kai asks him what he would do if he picks her. Maru realizes he loves Kachi and looks away, saying he doesn’t care.

Kai told Maru that he is embarrassed by Maru’s depression. Kai appears behind the two, and Kai calls her name. Maru comments that he is not falling for that. He felt Kachi’s presence and wonders if she has heard what they were talking about. Kai runs away and leaves Maru with Kachi. Kachi asks Maru if he needs her for something, and he asks her why she is her. Kachi reveals that she is attends this class, and other guys look at her chest, wondering if she is D or E.

Maru talks about food, and Kai was disappointed since he is not asking her for a date or something. Later, Maru met with Shida, who asks him to go out with her. Maru was not ready since he is in love with Kachi. Shida told him the truth about Kachi and that she is dating Abe. Maru worries that she was his first love, and Shida comments that Kachi doesn’t know what she is missing. Shida told Maru that they could get revenge. The two decided to date each other and see how Kachi would respond.

Read more about the love story of students here on Osamake: Romcom Where The Childhood Friend Won’t Lose Episode 1 Trailer, Plot, And Where To Watch Online?