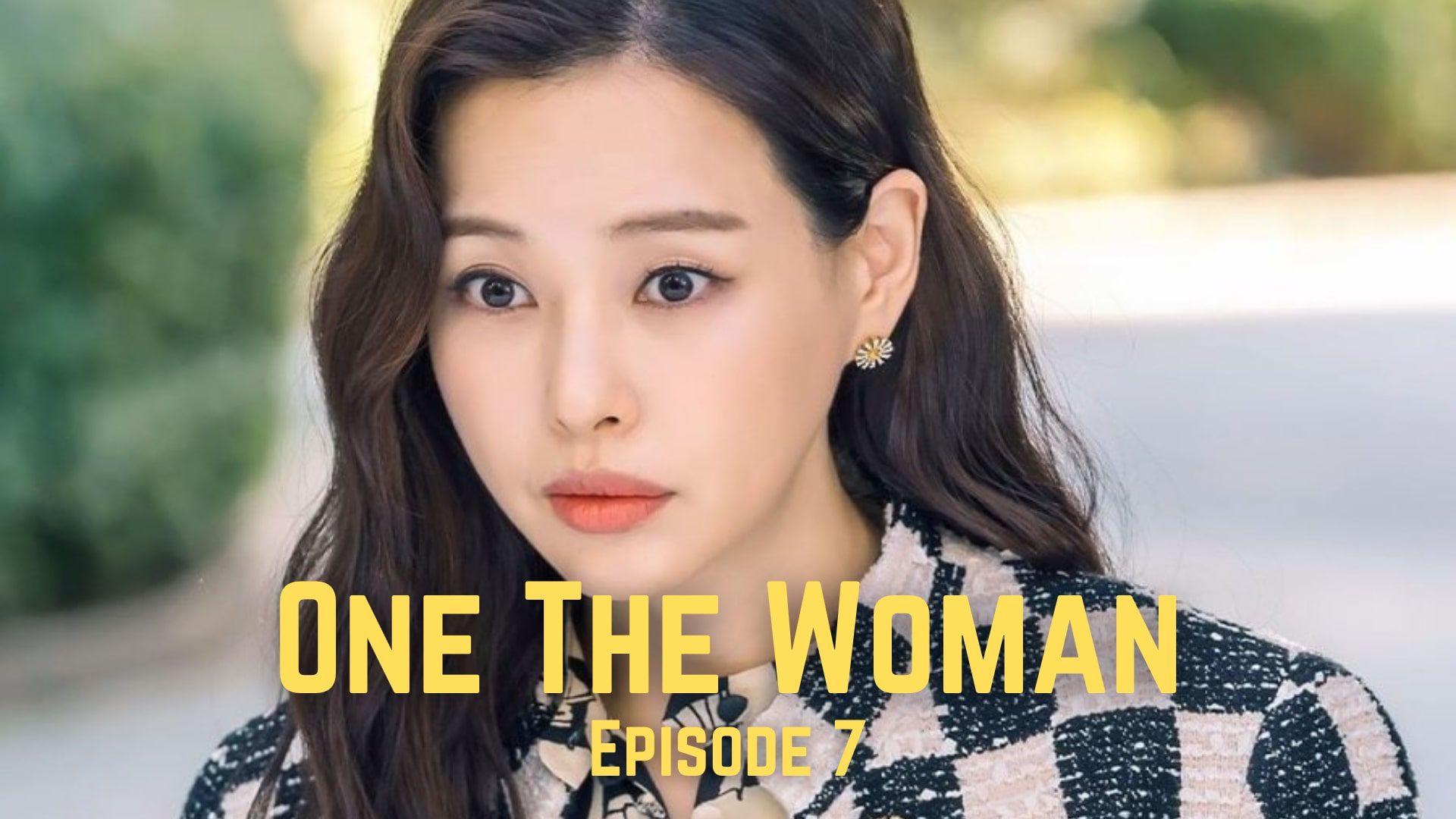 One the Woman Episode 7 is coming on the screen this week! The kdrama is receiving positive reviews for its hilarious and entertaining storyline and characters, especially Yeon Joo. Lee Ha Nee showcases a remarkable performance by acting in the dual roles Kang Mi Na and Jo Yeon Joo. Both characters are polar opposite but, Lee Ha Nee is portraying them flawlessly. The recent episodes are another proof of her excellent acting skill. So far, Yeon Joo has captured viewers’ hearts with her savage and antic but sweet personality. It will be interesting to see how will Lee Ha Nee present Kang Mi Na character in the future.

The latest episodes shared Yeon Joo and Seung Wook’s adorable bickering scenes. Both are getting closer to another one with each passing episode. Lawyer No is like the icing on the cake. His interaction with Yeon Joo and Seung Wook makes the whole episode worth watching. The trio comes together to throw a birthday party for Seung Wook. Things are turning serious on the other side since Sung Hye seems to catch on to Yeon Joo’s fake act. Seung Wook and Yeon Joo are working to find the real Kang Mi Na. The episode also reveals Seung Wook’s past and some fragments of his first meeting with Kang Mi Na. However, Yeon Joo’s behavior is constantly reminding him of the past Mi Na. It will be exciting to see Seung Wook’s reaction when he finds that Yeon Joo was the girl he met in the past and not Mi Na. Maybe One the Woman Episode 7 enlightens about this part of the storyline!

One The Woman Episode 6 Recap

Episode 6 begins from where the previous one concluded. Sung Hye starts to suspect the current Kang Mi Na’s identity. Therefore, the nut soup incident makes her more adamant that the present Mi Na is not the real one. Yeon Joo and Lawyer No celebrate Seung Wook’s birthday. Yeon Joo’s savage and hilarious personality seems to rub off on both Seung Wook and Lawyer No. It is always fun to watch the trio wherever they come together. After the birthday party, they talk about Seung Wook’s past. However, Yeon Joo’s actions remind him of Kang Mi Na he met in the past. 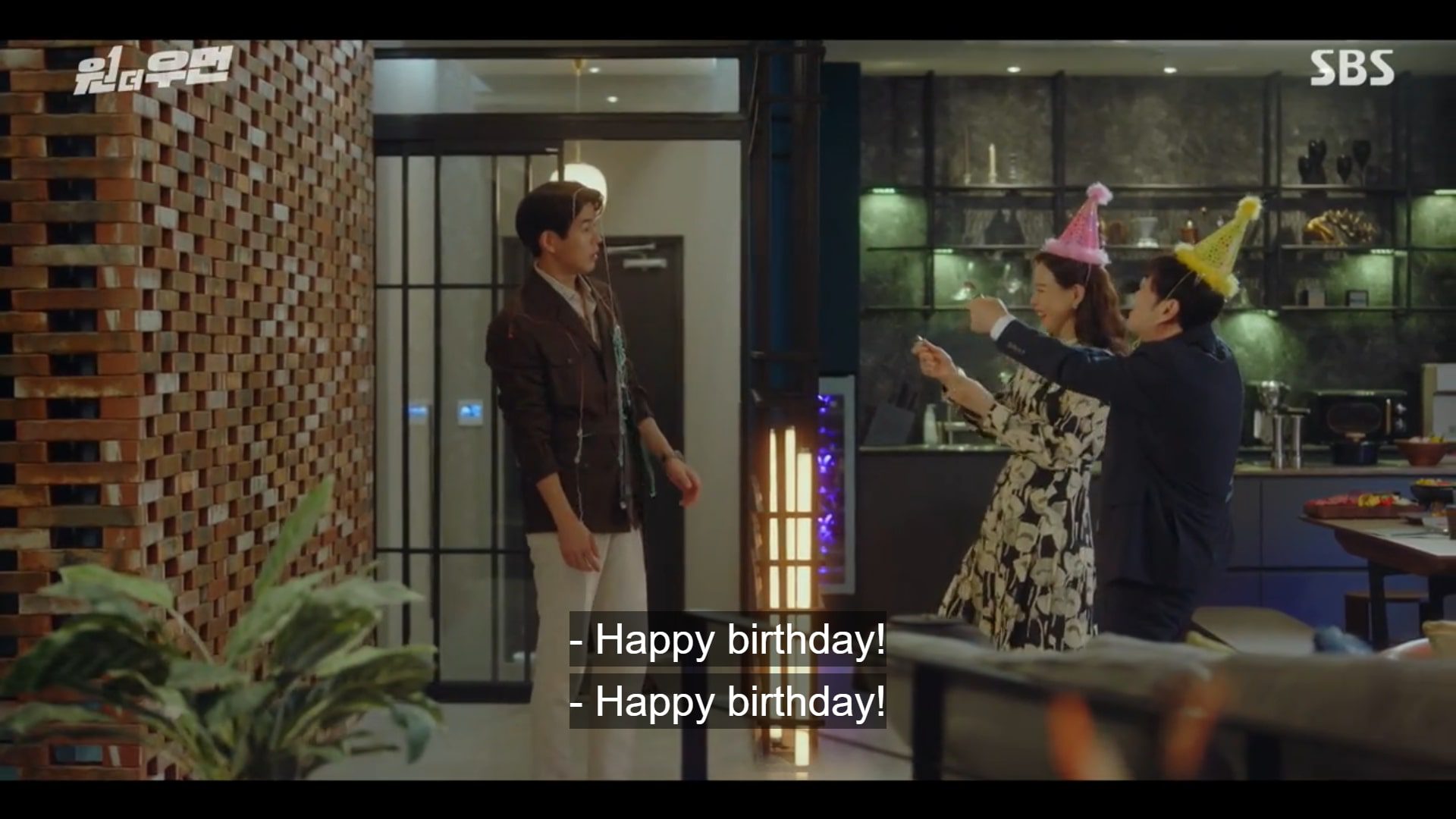 One The Woman Ep06

Meanwhile, the Han family is conducting an important meeting regarding ‘how to make the present Kang Mi Na more submissive.’ Which is definitely out of their hand. The news of Yeon Joo and Seung Wook having affairs is spreading on the internet. Myung Won put the idea of making the present Kang Mi Na pregnant. At the moment, Yeon Joo returns from the birthday party. Both get into a quarrel. However, Sung Hye interrupts them. To clear her doubt, Sung Hye asks Yeon Joo to unlock the tablet. Because the tablet requires the real Kang Mi Na’s fingerprint. Surprisingly, the tablet unlocks with Yeon Joo’s fingerprint! The following One the Woman Episode 7 will show how Sung Hye schemes to reveal Yeon Joo’s façade.

It reveals that at Seung Wook’s home, they were able to unlock the tablet. The password was Seung Wook’s birth date. The tablet also contains all wrongdoings of the Han family, whether it be Jae Hee’s slush funds, Sung Mi’s drug consumption, Myung Woo’s violent act, or Seung Woon’s extra material affairs. From that, they become sure that the real Kang Mi Na was going to use that to get her freedom, and now she must be hiding purposely. Moving on, Lee Bong Sik becomes convinced that the present Kang Mi Na is not real. Hence, in hunger for money, he visits Sung Hye.

Yeon Joo receives a call from Yoo Joon regarding the art gallery witness statement. She will have to visit the prosecutor’s office soon. To avoid getting questioned, Yeon Joo fakes illness and admits to the hospital. The ending shows adorable interaction between the trio where Yeon Joo asks them to visit her with food. Eventually, Seung Wook gives in and goes to meet her. They both get a good time together. However, Yeon Joo’s words remind him of the past Kang Mi Na once again. The episode ends with Seung Wook growing confused with Yeon Joo’s behavior that matches Kang Mi Na he met at the hospital in the past. Therefore in the upcoming episode One the Woman Episode 7, love is bound to blossom into the first stage! 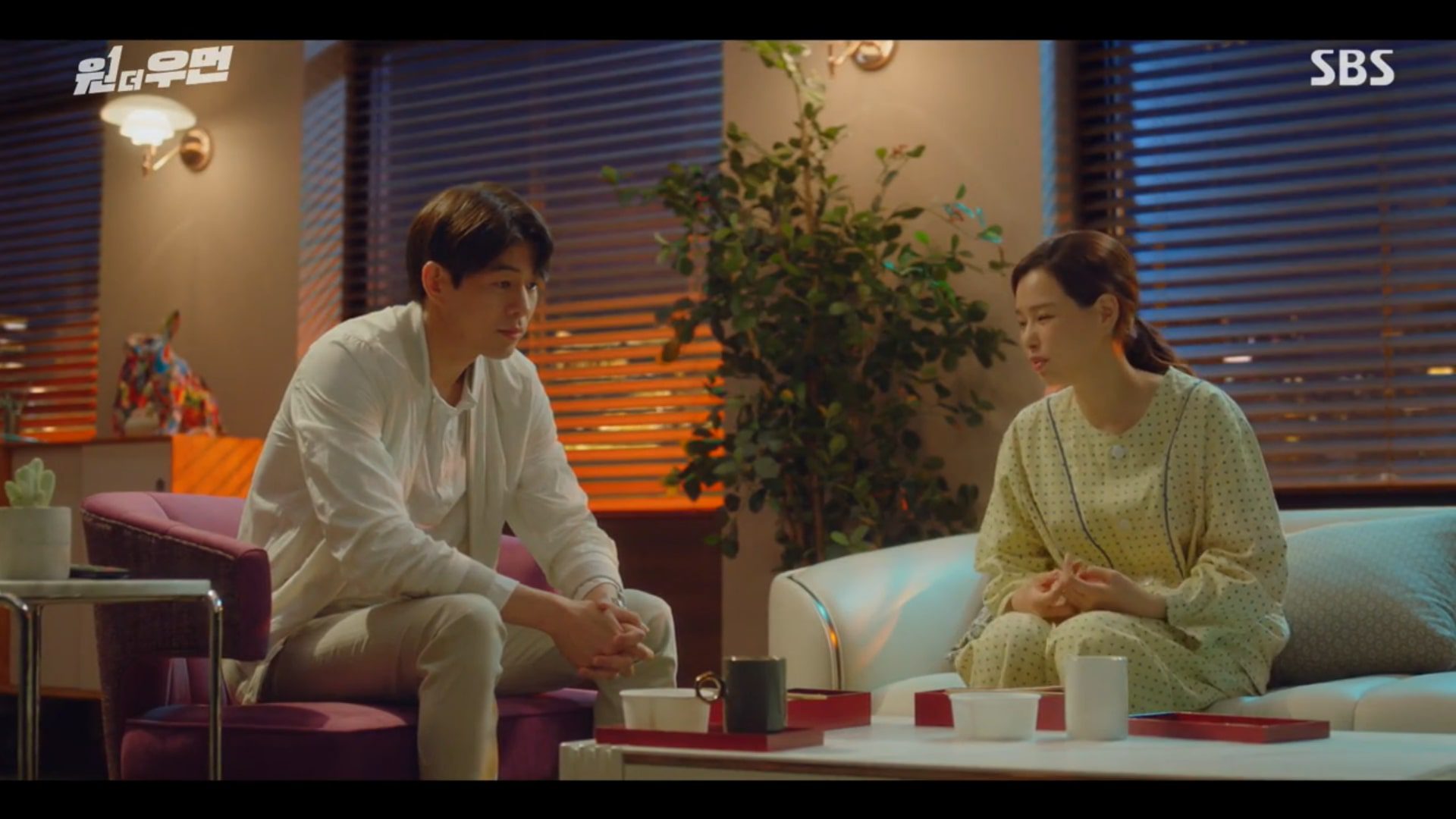 One The Woman Episode 7 Release Date

One The Woman Episode 7 will be released on 8 October 2021 at 10 pm KST on the SBS channel. The drama is scheduled for 16 episodes. So far, six episodes have been broadcasted. The first episode of One the Woman premiered on 17 September 2021. It will conclude on 6 November 2021. Each episode runs for a one-hour duration. Every new episode of One the Woman kdrama drops weekly on Friday and Saturday on SBS.

South Korean viewers can watch One the Woman Episode 7 on the SBS network at 10 pm KST. It is also available on Viki and Kocowa with English Subtitles for international fans. However, Kocowa is accessible only for North and South America. For easy access, you can even download Viki mobile app. 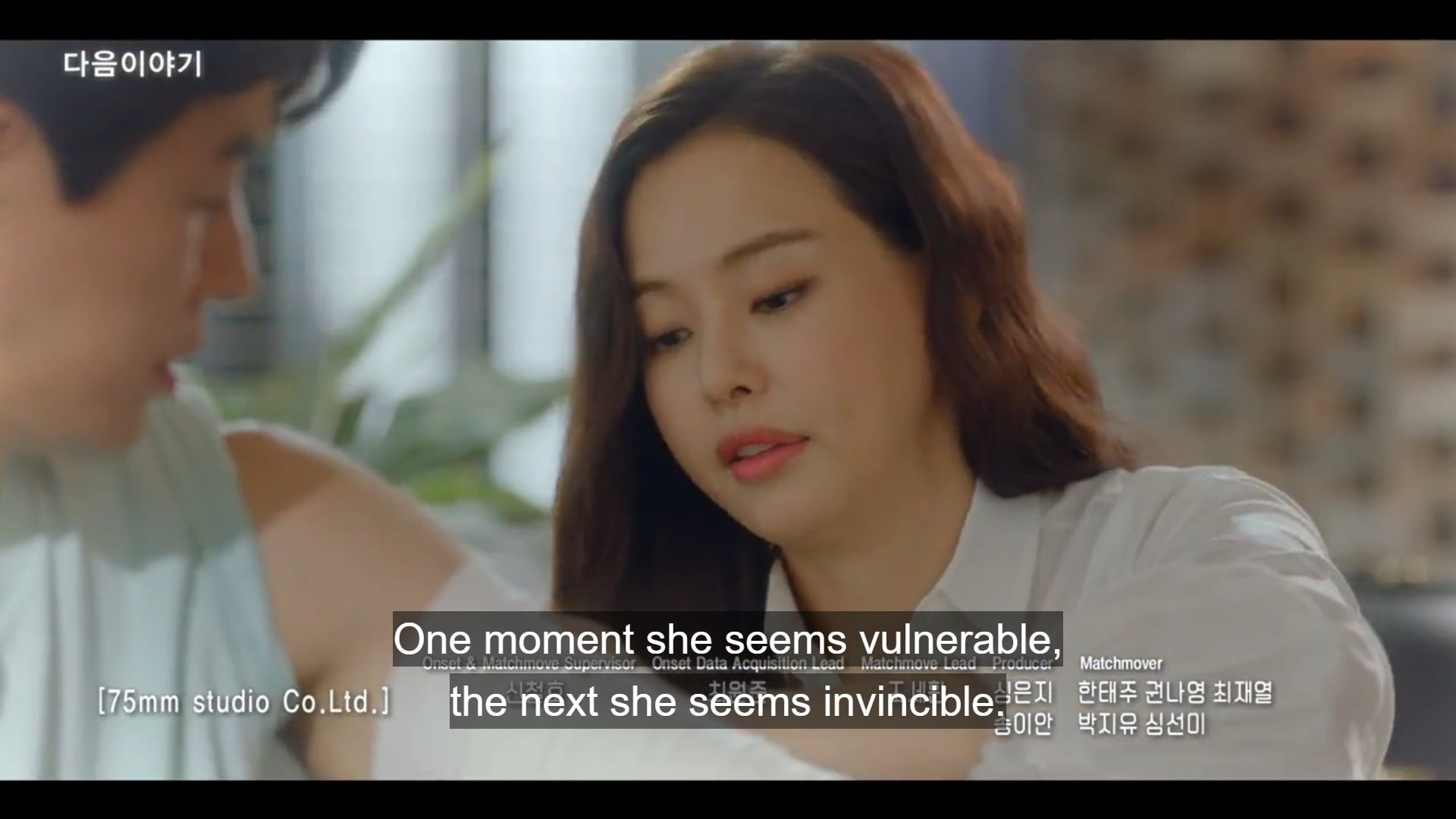 One The Woman Ep07 preview

Preview of One the woman episode 7 is already out! The next episode is going to be another comedy twister. Love is blossoming between Yeon Joo and Seung Wook. It seems Seung Wook will begin to fall for her. Yeon Joo also appears to have a crush on him. It will be exciting to see this chaotic couple’s chemistry! Meantime, Sung Hye will begin her moves to take down Yeon Joo’s mask. She seems to catch on to the current Kang Mi Na’s fake act. Lee Bong Sik will get trap in Sung Hye’s scheme and reveals Yeon Joo’s facade. Seung Wook will visit Myung Kook, who is the arsonist from the Hanju Fashion factory case. It shows he will get hurt, and Yeon Joo will treat him. That would lead them closer to each other. In short, the upcoming One the Woman Episode 7 will be a complete package of comedy, action, and romance!