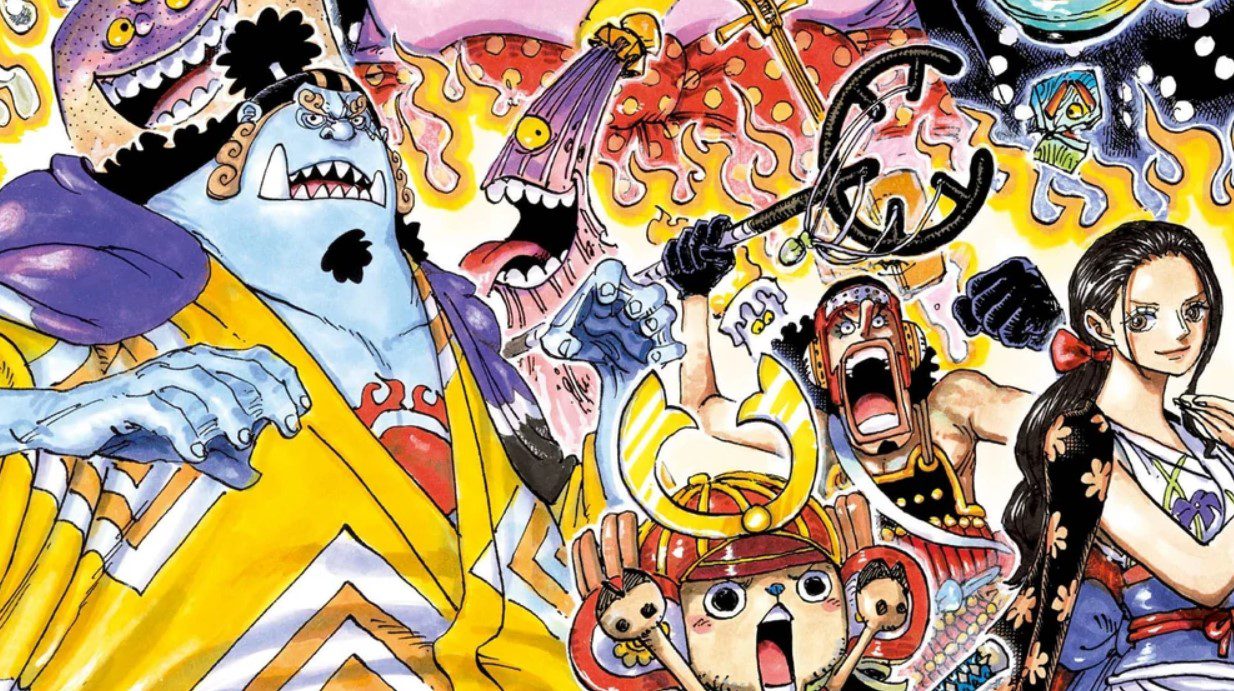 One Piece chapter 1020 is only a few days away after the manga saw a blank month with only two chapters released. This was due to the Olympics that happened in the same month with the manga’s regular break that comes once every three weeks. So things have finally returned to normal. And it looks like we will be getting regular chapters for the foreseeable future.

One Piece manga has released all chapters for July. And now August will begin on the weekend with the release of One Piece Chapter 1020 this week. This means that more actions lie ahead for the manga. And fortunately, we will have five Sundays in August, and we will have a break for only one of them.

By the end of August, a lot would have developed as we are looking at four chapters worth in developments in the ongoing war that has seemingly reached its peak. The last Tobiroppo standing on Kaidou’s side is only Black Maria, who faces Brook and Robin. So the decisive moments to the manga will likely take place throughout August.

Hopefully, there will not be any surprises, and things will progress as usual. Soon we will look at the One Piece manga chapter release schedule for August, including the expected breaks. So, we know how the manga chapters will be scheduled for August 2021. August 1st will be the first Sunday of the month and will open with a new chapter marking the first chapter’s release for the month.

One Piece Chapter 1020 will provide more updates about several battlefronts currently ongoing in Wano. The latest chapter official released ended up with Kaidou and Yamato’s clash, where we saw each of them turning to their hybrid form with Yamato’s hybrid form appearing for the first time.

One Piece Chapter Schedule of August 2021

The spoilers for the upcoming manga chapters have already been released. So those who follow spoilers already have an idea of what is coming next. We will not be looking into the manga spoilers at this point but the order in which the manga chapters will release for each week of August. The schedule is based on the expected release dates from the official sources, and VIZ Media extrapolated schedule. One Piece manga chapters scheduled for August 2021 is as follows:

That is the expected chapter release schedule for August. With a blank July, then we should expect things to pick up the pace from August. And that’s how it seems. Putting aside unexpected events that might cause any delays to the chapter release, so far, things look to be on the normal side.

With Oda’s breaks coming every three weeks, it looks like this time; the manga creator will have more than enough time to rest. Right now, the manga is coming from a WSJ break due to the ongoing summer Olympics in Tokyo. And then, two weeks from now, there will be another WSJ break, and we will not see another one of its kind until later in December.

So this means that we get the next two chapters and then return to the usual manga schedule where we get Oda’s break once every three chapters. It should be interesting to see that after this, the manga will be releasing chapters at the fastest possible pace. So the manga followers will not have to wait as long as they have been waiting for the past weeks.

One Piece Manga Build up to August 2021

Taking a look at the major events from the July chapters, we can already see that only the big fights remain if we don’t count Black Maria’s side. So this will mean that only Kaidou and his All-Stars are left; from here on, we will get to see the intense fight taking place. Kaidou has also allied with Big Mom, and at the moment, Kid and Law’s group are keeping her away from rejoining Kaidou.

Big Mom is currently on a rampage and seems to have her own ideas that differ from that of Kaidou. She even went as far as beating up some of Kaidou’s men, and it looks like she might not get to rejoin Kaidou on the rooftop anytime soon.

Meanwhile, Kaidou seems to have no problem fighting without Big Mom on her side. So it should be interesting to see Kaidou fight at full strength once again. The upcoming chapters will build up more on this as Yamato finally reveals her hybrid form to try and stop Kaidou while she waits for Luffy to come back.

So August will also take a look at the developments of events on that Big Mom pirate’s side. Earlier on, it looks like some of Big Mom’s children are not fully agreeing with the idea of joining Kaidou and his crew, as in the earlier chapter this year, we saw Perospero teaming with Marko for a while. So he seems to be interested in getting Big Mom back home. But in the meantime, we will see what the chapters will bring. Whichever updates come next, they will be interesting as the war has finally reached its peak.