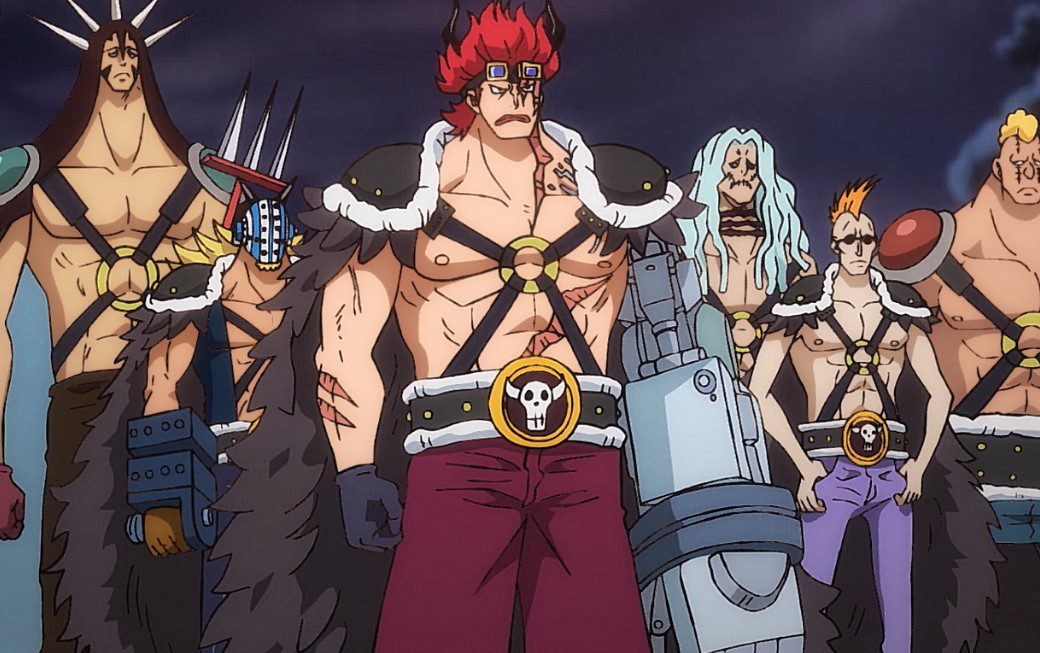 Finally, the Straw Hats and the Samurai have arrived at Onigashima, and Kinemon uses his powers to turn them into Gifters. Kinemon told them that the Animal Kingdom Pirates wouldn’t recognize them, and it will give them an advantage during the battle. Kinemon told the Samurai warriors that this is Onigashima Kaido’s stronghold, and they must avoid unnecessary fighting and try to reach Onigashima castle for the final battle. Let’s find how Luffy will make his way to Kaido’s mansion on the recent episode of One Piece. The episode title is ”Luffy Goes Out of Control! Sneaking into Kaido’s Banquet!.”

Orochi continues to enjoy with the ladies that praise him that he is so good. The ladies pour more bears for Orochi while showing him their chest. Orochi comments that they are free from Kozuki Clan ghost and the beer tastes good. He feels relieved because Kanjuro, the spy, has informed him of the Akazaya’s plans, enabling him to counter their insurrection with a foolproof plan. Orochi this he has blocked all the path of Akazaya from entering Onigashima, and the Straw Hats’ ship got destroyed. Orochi believes that he will no longer get tormented by the Kozuki Clan ghosts.

At Onigashima, the Raid has kick-off, and Kinemon leads the Easter Forces. Denjiro is leading the Southern Forces. There are more than 5000 troops while at Polar Tank; the pirate Law’s submarine went underwater with Akazaya Samuari to reach the castle where Orochi and Kaido are. The enemies are unaware that 5000 troops are advancing. Luff told the Straw Hats that they should get going, and Franky comments that he has Super Toya for this battle. Captain Kid is ahead of Luffy, saying that he will take Kaido’s head.

Previously on One Piece Episode 984

Luffy confronts Jaggy that he is not following Kinemon’s plan. Captain Kid replies that he doesn’t care about the samurai plan. Luffy told him that everything in the Land of Wano is at stake in this battle. Captain Kid reminds Luffy that they are here to take down Kaido, and it happened that they are both at Onigashima. Zoro realizes that Luffy will make the matter worse, and he will go stop him. Kiku and Kawamatsu are worried about Luffytaro-san. Kiku thinks that Tra-guy-san’s prediction is correct, and Luffy will be heading to Kaido’s castle.

They realize that those two idiots will never stick to their plan since Kaido’s head is their priority. Meanwhile, the beast is enjoying the festival, and that party is fun. The guards complain that they are doing their duty during the festival. The other one is glad that they have a beer and said no Samurai would reach here. Kanjuro arrives and kills two guards and told Momonosuke to hurry. Momo got tied to a rope, and Kanjuro is pulling him.

Kanjuro is heading to see Orochi with kidnaped Momonosuke. But he realizes that he hasn’t’ use this path before, and it is confusing him. Luffy made his way inside a banquet and found that  Kaido’s men are celebrating, wondering where Kaido is. Zoro enters the building and bumps with one of Kaido’s underlings. The guy wanted to punish him for bumping with him, but Zoro locked at that guy for felt overwhelming powers and talked about beers. 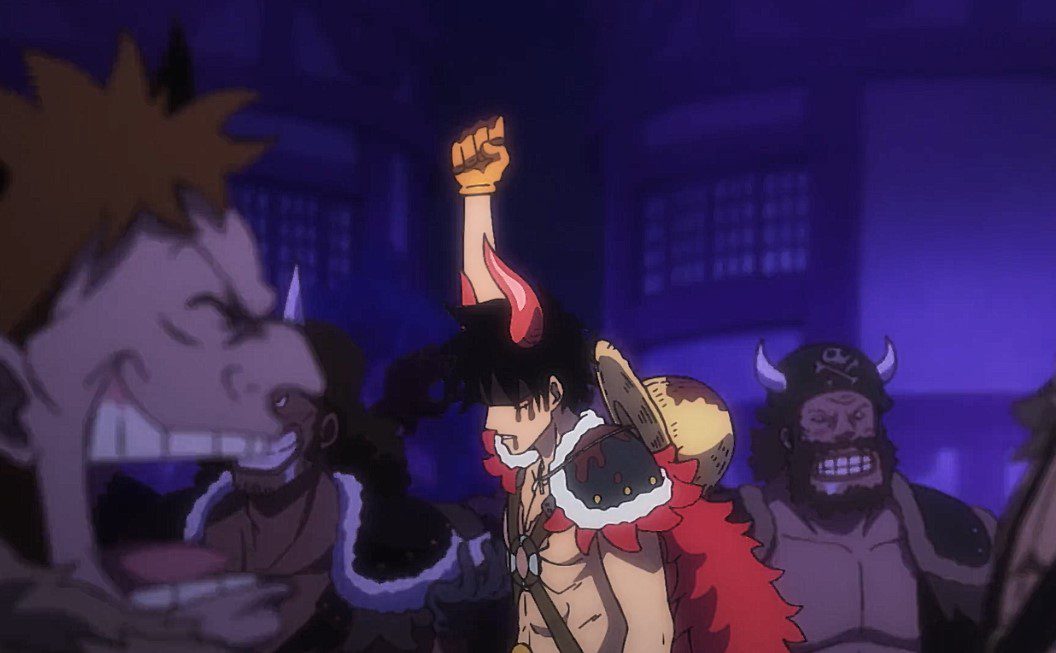 Zoro told the guy that he is looking for someone, and the guy said they have tons of ”Booze” that the people in Ebisu Town and Okobore Town will never drink. Franky is preparing his Super Toys, and the crew told him to hurry since Luffy is ahead. Franky opens Number 4 and reveals Black Rhino Fru-U4 and Brachio Tank 5. Chopper said he’s the commander, and Usopp said he is the sniper.

The crew gets disappointed to hear that Jinbei allowed Zoro to look for Luffy since they know Zoro always gets lost. Sanji gets furious when he sees Ussop with Nami, Robi, and Carrot squeezing inside the Tank. He notices that Usopp is in heaven, enjoying touching the ladies’ chest. Shinobu closes the door for Sanji and said old ladies are interested in young men. Franky wanted to give Robin a ride, and Brook enters, saying that he is having a little ”Bromance.”

The Animal Pirates Kingdom is still inside the room, waiting for Kaido’s orders. Black Maria enjoys watching Ulti and One Page toying around. One of the underlings told them that Kaido had summoned them. Zoro puck up a fight and blow Kaido’s men using Eye Haki. Luffy saw Queen entering his fans and said it is that Balloon. A pot of Red Bean Soup falls on top of his head and recalls all the moments he spent with Tama. Luffy throws that pot away and gets furious. To be continued.

Where To Watch One Piece Episode 985?