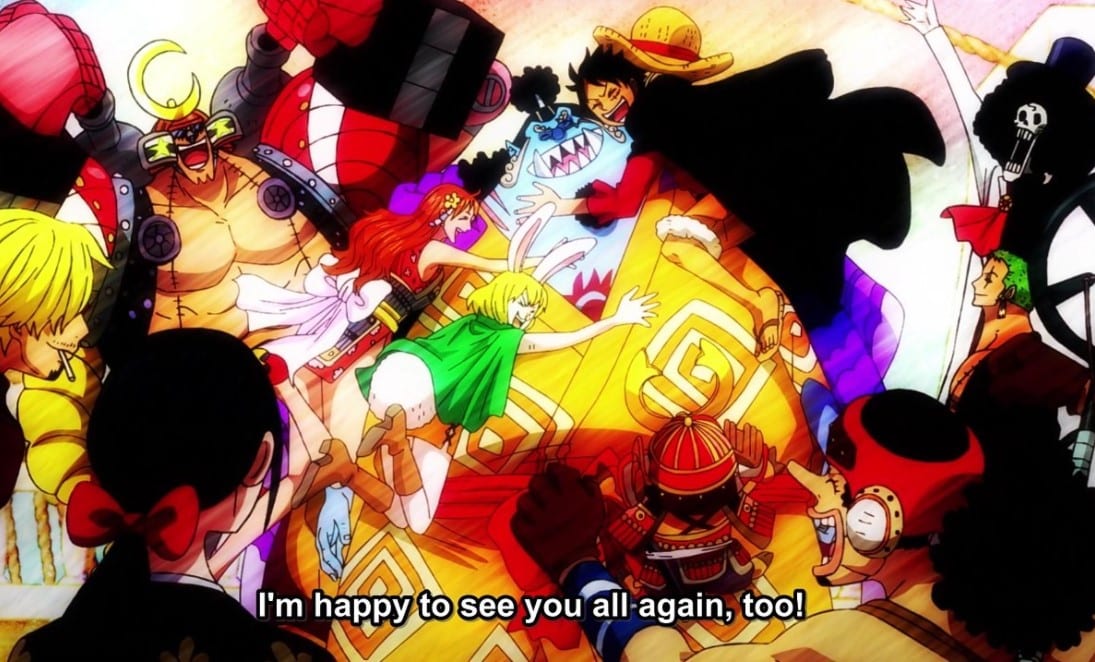 One Piece is about to reveal the greatest war in Onigashima. Three Captains are in action, and Luffy consoles Momonosuke before Kanjuro left with him. He told Momonosuke that they would come to rescue him. After allowing their enemy’s spy Kanjuro to kidnap Momonosuke, Luffy and the rest of Samurai faced another crisis when that long-awaited man finally returned. A mysterious man told everyone around the sea to listen to him. The man reveals that he was born in the Fish-Man District, the Kingdom of Ryugu, the country in the deep sea.

The Straw Hats Pirates get excited that they know that strange man. The man continues to say that he gave his seniors around the world trouble. ”I am going to exchange a cup of sake with Boss Straw Hat.” People call me First Son of the Sea” Jimbei Helmsman of the Straw Hat Pirates Bounty: 438 Million Berries. Jimbei told them to remember his face as he will continue to help them. The episode title is ”A New Member! ‘First Son of the Sea’ Jimbei.” Luffy jumps out of the ship and embraces Jimbei. The other two Captains watch Luffy as he welcomes a new member.

Jimbei jumps inside Sunny and comments that he is the crewmember of the Sunny starting today. They both embrace Jimbei and Sanji worries that Nami is hugging Jimbeit so tight. The Straw Hats decide to make a welcoming party. Usopp comments that it is the former Warlord of the Sea, Jimbei, and their new member. Luffy comments that Jimbei made him worry, and the two recall the first time they met and how Luffy lost his brother. The day Jimbei asks Luffy to free him from the jail and will help take down Kaido.

Previously on One Piece Episode 981

Jimbei reveals that he takes care of some injured members of the Sun Pirates, and the farewell party for him was a blast, so it was hard for him to escape. Nami comments that he is glad to see Jimbei again. Luffy realizes that their promise has come true, and they have met again at the Land of the Wano. The two also recall the day of the battle a guy who wanted to take Dragon’s son, and Jimbei protected Luffy since he was conscious. Meanwhile, Kinemon and the Akazaya members decided to plan on how they will invade Onigashima. Kin tried to call Luff and Law told him not to bother.

They realize that Law and Luffy won’t stick to the plan and decided not to include them in their mission. Kinemon addressed his strategy and said they must enter Onigashima using the main entrance and break down the strong force. Law realizes that plan is not safe and said that two idiots would try to attack, fighting over Kaido’s head. Those idiots will be used as bait to break the main entrance of Onigshima. The rest of the Samuera will use the back entrance since the stronger warriors will be focusing on Luffy and Captain Kid (two idiots). 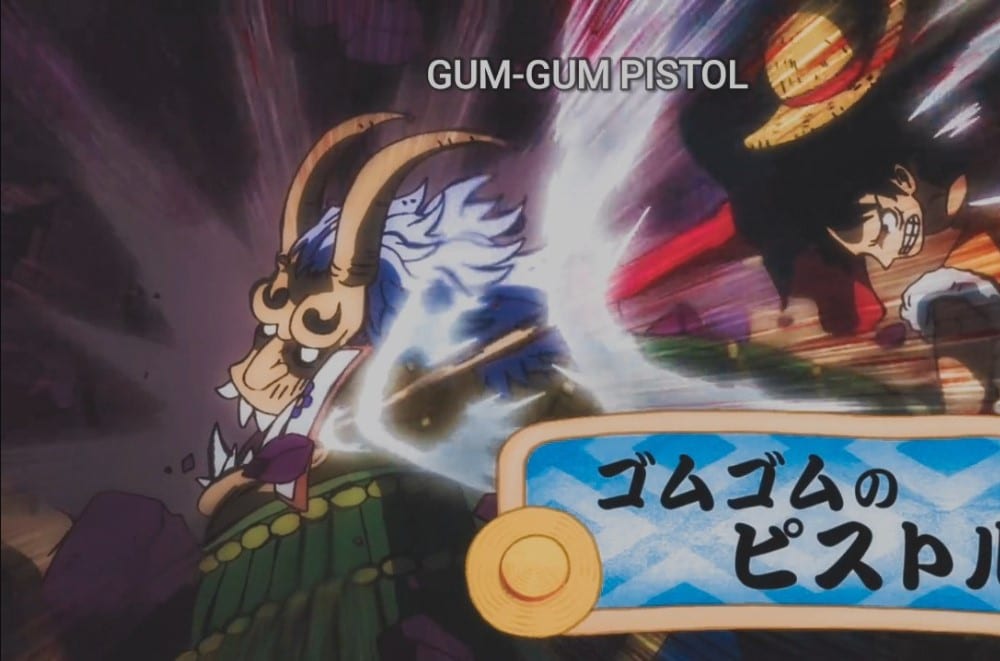 Kinemon and the rest realize that plan is outstanding since Luff and Kid won’t hesitate to destroy Kaido’s underlings. They both agree on the same goal. Meanwhile, inside, Sunny Zoro comments that he smelled liquor and it is time to party. Sanji replies that Zoro has no taste or smell since they can all smell the sea. Franky is glad that someone who will sir the ship is back. Sunny arrives at Tori Gate, and Zoro was correct that he smelled beer. Usopp wonders if they have to attack, and Luffy agrees. Luffy said they are getting the beer and Kaido’s head.

The Animal Kingdom Pirates spot the enemy’s ship and begins to attack. Luffy jumps and smashes the pirates using Gum-Gum: Gatling and destroyed all the guns in the boat. The beast appears trying to slash Luffy, who slams the beast using Gum-Gum: Pistol. Zoro unleashes Two-Sword Style: Hawk Wave. Broke got surrounded by the Animal Kingdom Pirates and said that they got him.

Broke unleashes Soul Solid: Swallow Banderole and freeze all the enemies around him. Robin stomps the enemies using Mil Fleurs: Gigantesco Mano Stomp, and Sanji said Robin is beautiful even when she fights. Sanji uses Flanchet to beat the guy who teases him for complementing Robin. Franky uses Franky Boxing to punish the cocky pirates. Nami, Usop, and Chopper said those guys are okay; they don’t need their help. Luffy punishes the last group using Gum-Gum: Jet Pistol. The upcoming episode will be focusing on Queen and Yamato with the Straw Hats attacking.

One Piece Episode 982 Release Date & Where To Watch?