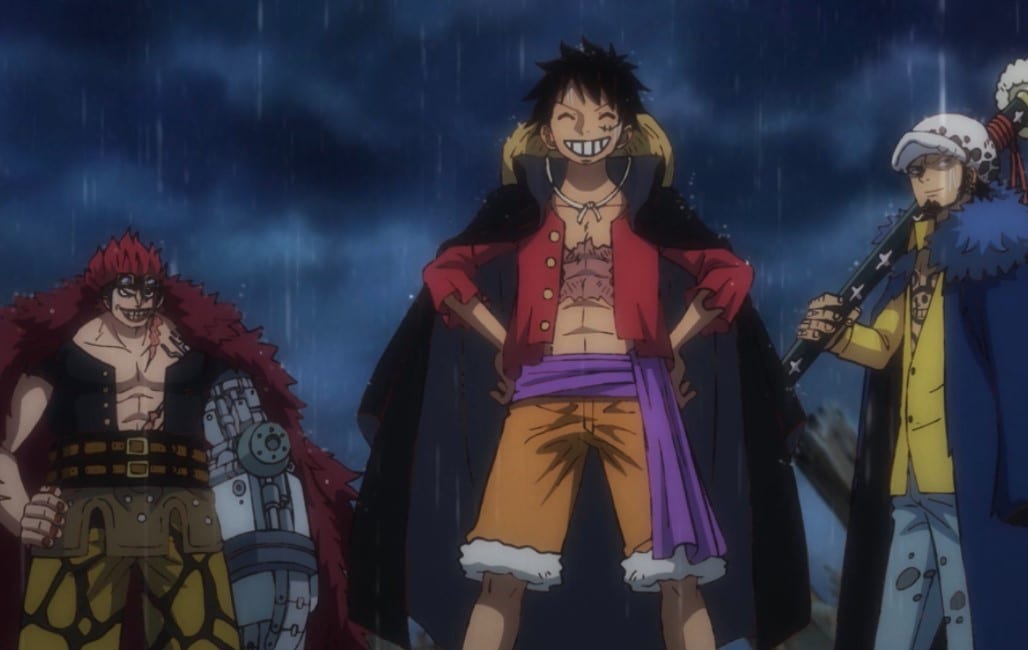 The adventures of Monkey D. Luffy have finally begun as he aims to become the King of the Pirates. Luffy’s definition of the Pirate is different from other Pirates. He enjoys traveling around the world-conquering different islands while bringing peace to the world. The Straw Hats became popular around the world and decided to behead the mighty Beast Pirate Kaido. Thus, the greatest war in the Land of Wano history is about to begin. One Piece has returned to the future after revisiting the past. Take a look below.

The episode begins with Kinemon thanking Luffy for coming and confessing that he got their plans exposed. After finding the team, Kanjuro got revealed to be the enemy on the night of the Fire Festival. It seems as if the Akazaya Samurai hope got lost until Luffy and the other allied Pirates appeared. The Kyoshiro Family arrived and shocked the Pirates by slashing Kaido’s men ship in half. Kinemon wonders who that man is since they never allied with him. The title of the episode is ”Good Luck! Leader Kinemon’s Plot.”

Kanjuro wonders what is happening after Kyoshiru cut their ship. Ashura thought that Kyoshiro is working for Orochi and they must get ready to fight him. Ashura reveals that the man is taking the place of Boss Hyogoro. The man shows that he is Yakuza from the Flower Capital, and people call him Napping Kyoshiro. Kyoshiro comments that his Kyoshiro Family is 200 strong, and he wants to ally with them and help with the raid. Kaido’s men are surprised why the Boss is helping the other side. Sanji wonders why that guy is joining their side. Brooke comments that he thought that man was an enemy.

Previously on One Piece Episode 979

Luffy asks what does that man wants, and Kuku reminds the guy that he is Orochi’s subordinate and what favor he owes them. Kyoshiro replies that he owes the Kozuki Clan an immeasurable number of turns and debts. Kyoshiroo said he remembers Kin every day. Kinemon wonders why that guy is calling him Kin-san and realizes that voice is familiar. Kyoshiro talked about the Mountain God incident that occurred in the capital 40 years ago. People thought that Oden was crazy, but it happened because the younger Kin-san tried to sell the little boar.

Kinemon recalls that day when he witnesses Oden slashing the giant board using Two Swords: Paradise Waterfall. Kinemon realizes that the only guy who knows about that story is Denjiro. The Akazaya members recognize that it is Denjiro. Ashura admits that Denjiro was his rival when it comes to smashing the enemies. Ashura recalls when he got separated from Kinmon and battle an army of Kaido’s men with Denjiro. The Akazaya members are glad that Denjiro, AKA Kyoshiro, is alive.

Kyoshiro unties his hair, and the Azaya members have no doubt it is Denjiro. In his Denjiro style, he comments that he is the Kozuki Clan’s retainer and one of the Akazaya Nine. Kyoshiro remarks that he is unrecognizable, and when he heard that Kin-san and the others have returned, he kept a low profile. Kyoshiro reveals how he fooled Kanjuro since he knows that Kanjuro was the spy and Orochi would have wiped him out. Momonosuke is still in Kanjuro’s hands, trying to bite him and call s out Denjiro’s name. 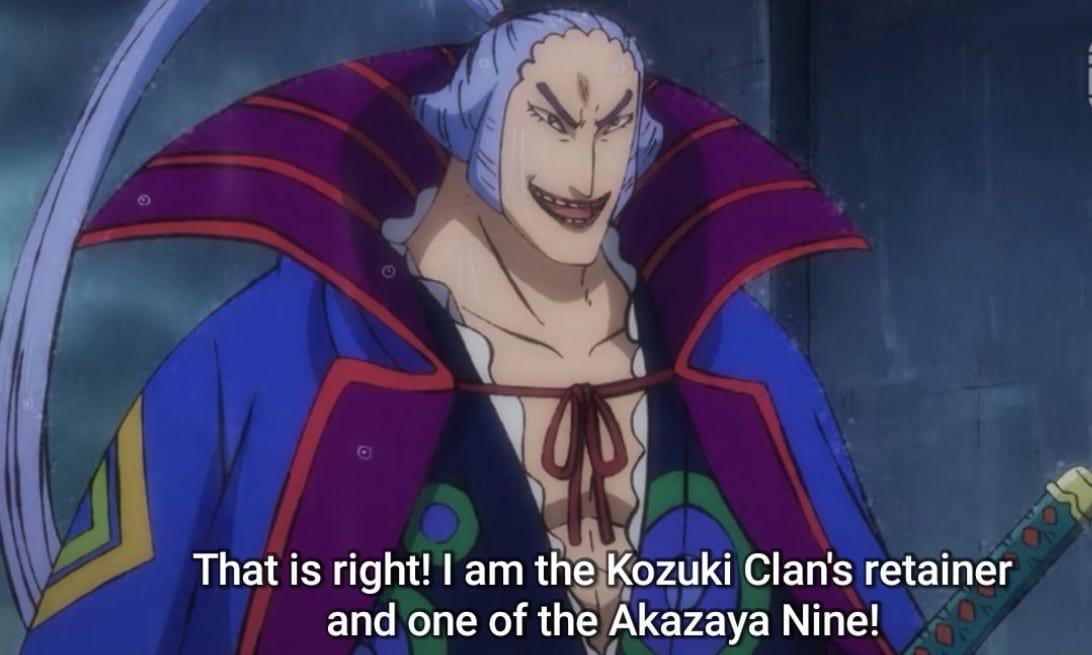 Kyoshiro reveals how he keeps on earning Orochi’s trust until the end, and he freed 1000 Samurai in Rasetsu Town Prisoners’ Quarters. The reinforcement arrives, and the Akazaya heard ”1200 soldiers in total! Count us in!.” Kaido’s me can’t believe that Boss Kyoshiro is one of the Akazaya Nine. One of the men orders the other to call Onigashima and warn Orochi. Denjiro shows Kinemon the flyer of the Crescent Moon and comments that Kin-san is a hell of a smart man.

A Reversed Cresent Moon signifies rebellion, and the crew realizes that they are in a location where they said they would meet. Danjiro reveals how a spy fell on his trap and told Orochi that Tokage Port was the new Rendevous Point. The plan worked accordingly, and the 4200 troops that Kinemon recruited were lying low at the Habu Port wharf until the time came. Suddenly all the troops arrived, and they are ready to attack Onigashima. Hyogoro also arrived and commented that they are coming with Akazaya Samuari.

The plan to raid Onigashima hasn’t gone wrong at all, and 1200 makes the total of 5400 to invade Onigashima. Zoro comments that they were going to make it no matter what. Chopper comments they can easily beat the Animal Kingdom Pirates. Luffy said he understands nothing, but he will go with the flow. Law told Luffy not to lower his guard since Big Mom is at Onigashima. The Samurai comments that Kinemon is the only guy who can lead them. Kawamatsu battle with Kanjuro trying to free Momonosuke. But he managed to escape with Momonosuke.