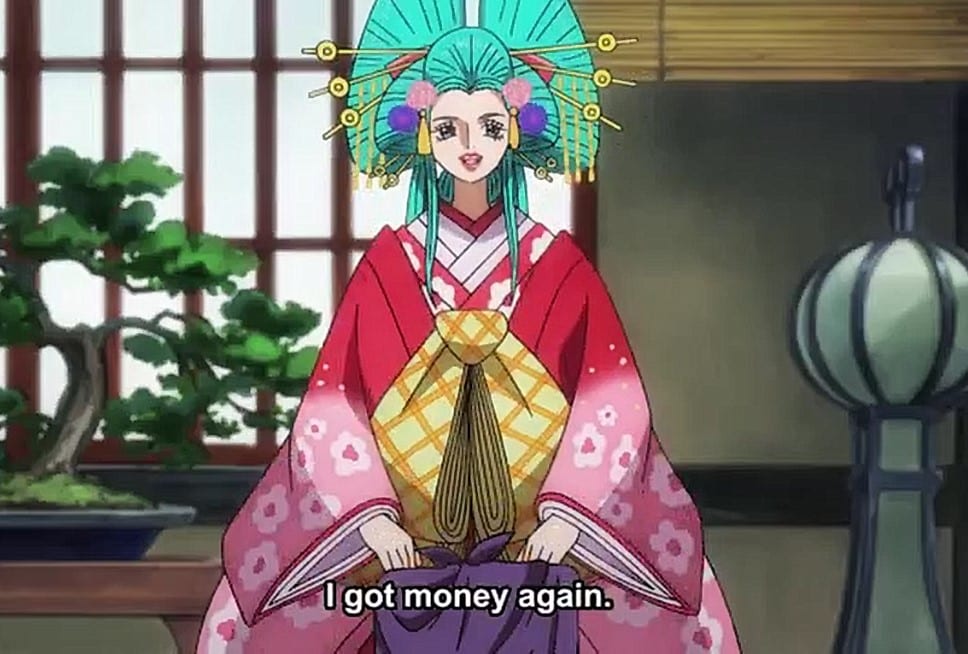 Orochi gets furious and thinks that the Akazaya members have surrounded him. He shouts that someone can bring him the Kozuki samurai retainers’ bones. Orochi is worried about why his underlings cannot find the samurai, and he wants proof of their death.  Meanwhile, deep in the woods, Ashura is taking a deep breath in front of his hideout. He got injured with arrows piercing his back. Ashura remembers everything that Toki said before she dies. Toki said that ”Cast nine shadows on the night woven of 20 years and you shall know the brilliance of the dawn.”

Previously on One Piece Episode 976

Ashura wonders what Toki meant by the dawn and comments that it’s still a long way to go until this country sees its beginning. Ashura wonders if the others are still alive and 20 years is near. Kappa tries to cheer Hiyori since she has not accepted that she has lost her parents. He tried to sing a Kappappa and pa song to make Hiyori smile. Kappa tells the princess that he is doing a Kappappa dance. Denjiro cried for over a month, training alone inside his hideout. After a month, he came out with a new appearance, and he no longer wears glasses.

Later Denjiro arives at the Land of Wano, and no one could recognize him. Orochi’s men think that Denjiro is not from around, and they tried to bully him. But he taught one of Orochi’s men a lesson. Denjiro picks up two men with their hands and makes them headbutts each other. Those two men realize that Denjiro is firm and decided to serve him. They ask his name, and Denjiro replies that he is Kyoshiro. Kyoshiro works hard and forms a Kyoshiro family. Everyone in a family has his goal, and no one knows each other’s secret. 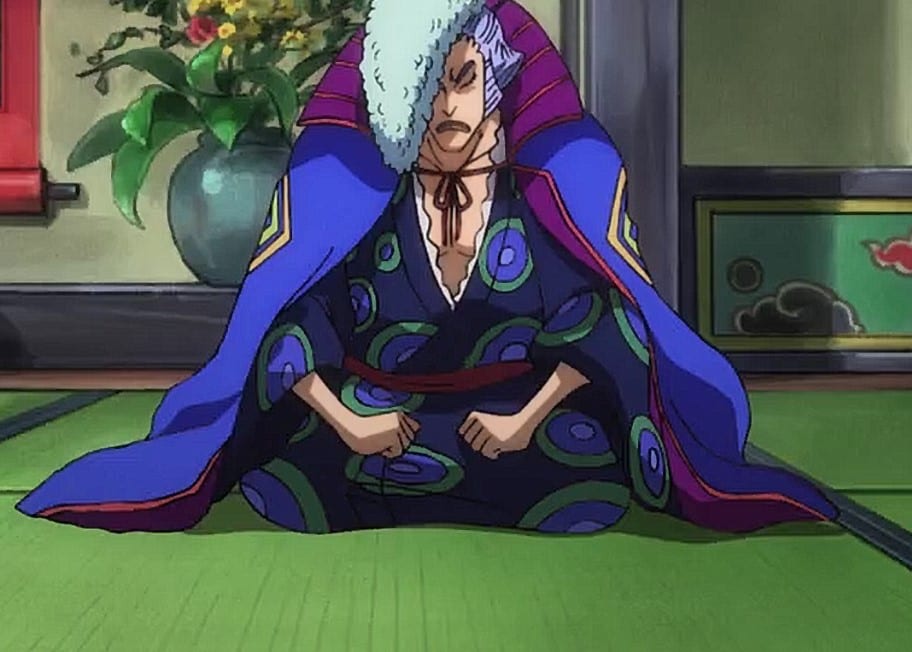 In the morning, the Kyoshiro family is headed to the Capital and meets Orochi. Orochi is excited that the Kyoshiro wants to ally with him. Orochi told them to lift their head since they are his guest, not the enemies. He comments that they have a good reputation and asks if they could serve as his guards. Kyoshiro replies that it will be an honor and comments that he will offer many money, women, and men. Orochi is impressed seeing that Kyoshiro is showing a lot of money, and he decided to approve Kyoshiro as one of his important men.

The warriors wonder who is this Kyoshiro who can fight, and he has dominated the Capital. One of the men reveals that Kyoshiro is a yakuza who is taking the place of Boss Hyogoro. The Kyoshiro family has dominated the Flower Capital, and the people call him Napping Kyoshiro. The lady comments that he looks like he is tired and sleepy. He changes his name to Ushimitsi Kozo at night and steals the money for all men who serve Orochi. Meanwhile, Kappa got separated from Hiyori and began to look for her.

Hiyori arrives at the Capital; fortunately, she falls on the hands of Kyoshiro. Kyoshiro got shocked, realizing this is Oden’s daughter. But he acts like she is just a hungry girl and needs a place to stay. Kyoshiro took her as an orphan and began to raise Hiyori. Later Kyoshiro told Hiyori everything and that he is Denjiro, who is on a mission to take down Orochi. Hiyori changed her name to Komurasaki and started hunting Orochi’s men. Meanwhile, Kinemon meets with the Straw Hats.