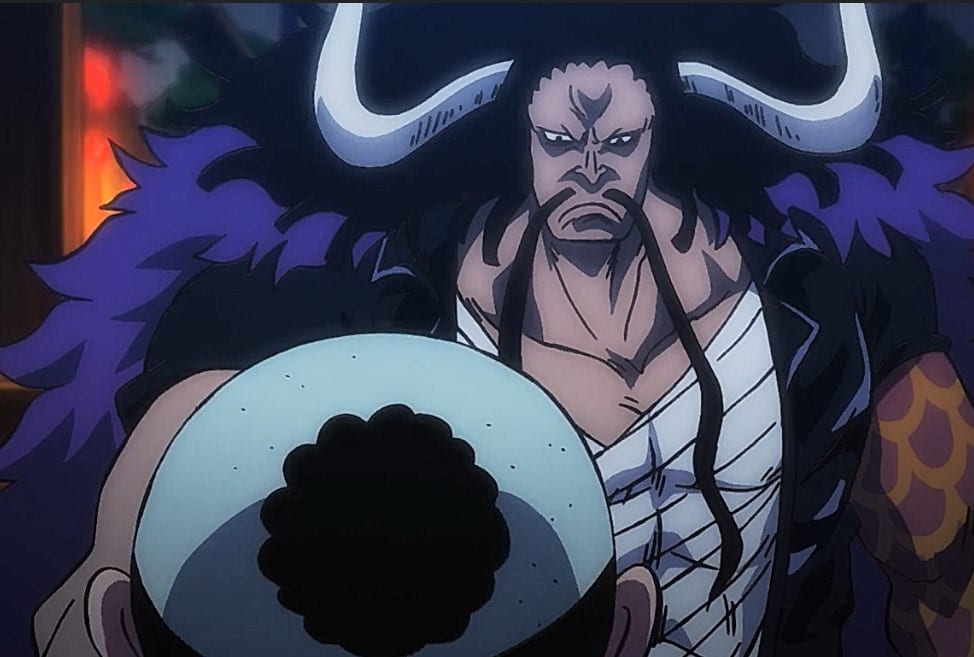 Oden’s era is about to come to an end after he accepts being boiled. He died in front of Orochi, and after Kaido shot him and Oden burns inside the boiling lava pot. Orochi and Kaido didn’t keep their words even though Oden survived for an hour while being boiled. The Akazaya members know what they have to do since their master is no more. One Piece episode is titled ”The Castle on Fire! The Fate of the Kozuki Clan!.” The citizens’ morns Oden’s death. Fukurokuji comments that Oden’s son must bear the burden of being in the spotlight.

The citizens insist that Oden was the true Shogun of the Land of Wano. Orochi gets furious and begins to shoot everyone who mentions Oden’s name. He shouts to the citizens that he is the true Shogun. Orochi told the guards to chase the Samurai and eliminate the Kozuki clan. Meanwhile, at Kozuki’s castle, Hiyori and Momonosuke are sleeping. The guards told Toki that Oden died a heroic death. Toki realizes that Oden left her will a message that she has to read in time like this.

Previously on One Piece Episode 975

Toki read the message that Oden left for her and find that he wrote: ”Toki, I see the end coming. If I fail, someone who can take down Kaido won’t appear anytime soon. Twenty years from now, a massive war that could divide the ocean in two will probably erupt. That means twenty years from now, the leading figures of that massive war will surge into the New World.  They will be the ones to bring down Kaido. A long winter is coming to the Land of Wano. Toko, I want you to use your power if I die.”

Toki tears that note, and she realizes that Oden has entrusted her with Enma and Ame-no-Habakiri. She remembers that Oden told her to give it to Hiyori and Momonosuke when they grow up. That day Toki told Oden that the kids are too young to handle the sword. Oden asks her if she is not angry that he is sentenced to death. Toki told Oden that he wouldn’t die. Oden comments, that’s my wife. After tearing apart the note, Toki allows the pieces to fly over the Land of Wano.

Kinemon and the Akazaya are hiding deep in the forest, thinking about what they should do next. Cat Viper comments that they have to kill all of their enemies, and Dogstorm told him that they don’t have to attack without a plan since that would be throwing away their lives. Cat Viper replies that he can’t neglect seeking vengeance for Oden anymore. 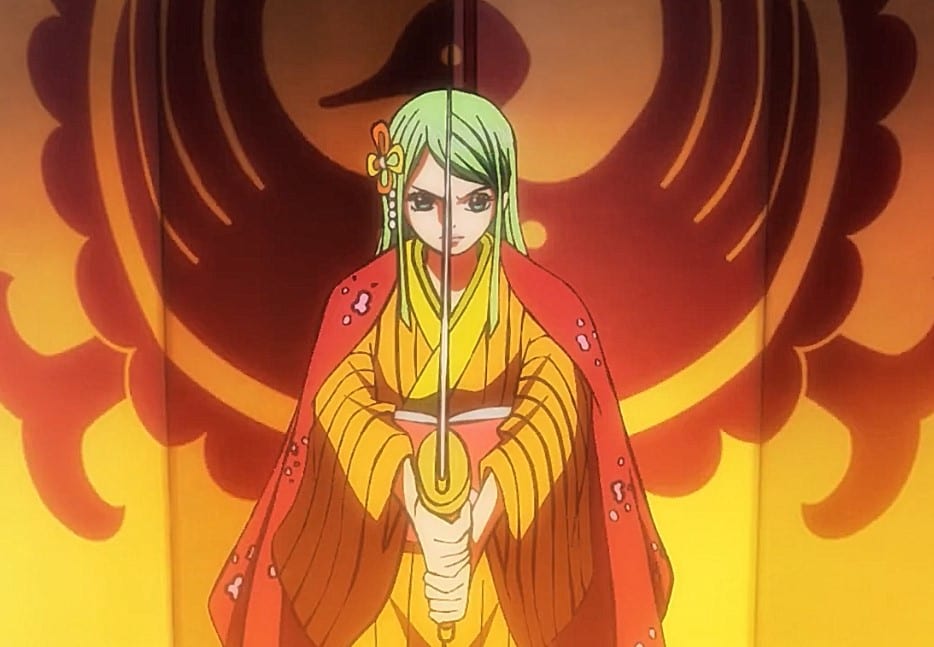 Dogstorm comments that it is pointless to fight now, and they are outnumbered. Cat Viper replies that Dogstorm is acting like a coward. Dogstorm reminds Cat Viper what Oden told them, and they must stick to their master’s plan. Cat Viper insists that he will fight even if it kills him. Dogstorm replies that they have to take everyone to Zou and lay low there. He told Cat Viper that if he is eager to die, he could grant his wish. Cat Viper told Dogstorm to bring it on, and Kinemon told them to stop.

Kinemon reveals that they have a mission to save Toki, Momonosuke, and Hiyori and flee to Zou. He told them that he wouldn’t allow anyone to lose his life before the mission gets accomplished. Shinobu arives and gives them weapons to survive. On the way to the castle, they battle with Kaido’s underlings. Cat Viper grabs Dogstorm with a collar asking him if he is the spy that Oden talked about. Dogstorm rolled with Cat Viper and told Cat Viper that he is the one who causes this since he teased Orochi.

Raizo told the two to stop and focus on their enemy. When they arrive at the castle, they found that Kaido has already burned it and left. Kinemon apologizes to Toki, who sent the Akazaya members along with Momonosuke to the future. She told Kawamatsu to take care of Hiyori and heads somewhere. Toki died in front of the execution ground where Oden died. The Akazaya members along with Momonosuke, have arrived in the future. The era of Kaido has begin.