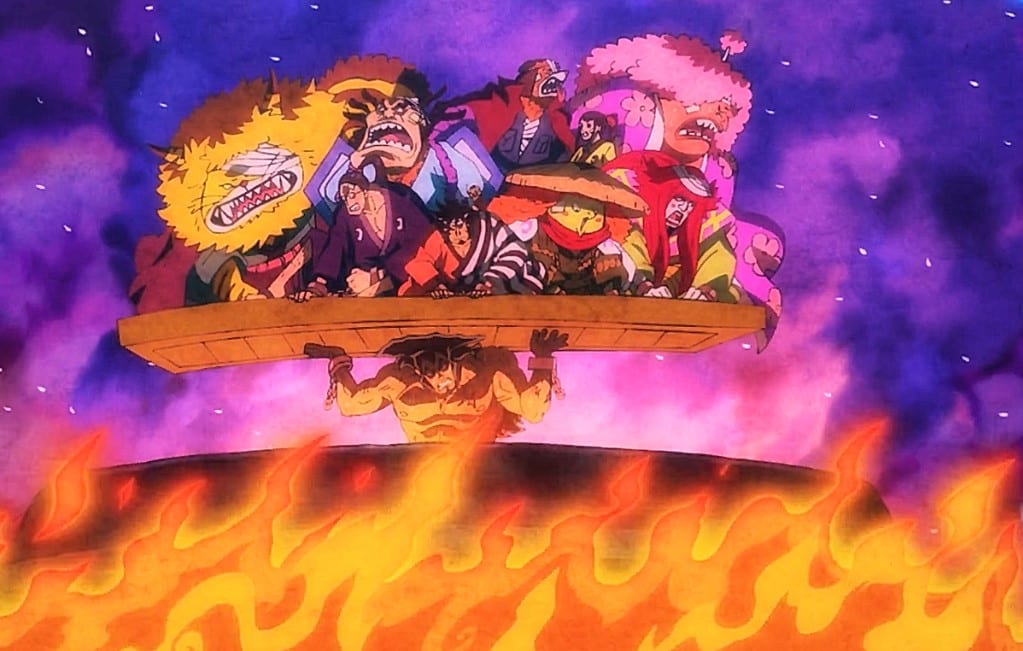 Earlier, Oden and the Akazaya members challenged Orochi and Kaido. Oden was about to finish Kaido with his signature move, but he fell into a Clone-Clone trap. Oden got punished by Kaido trying to save his son Momonosuke. But he realizes that it is the old hag that uses the Clone-Clone technique. After the battle, Oden and his group surrenders and got sentence to boiling. The final battle between the Akazaya Samurai and the Animal Kingdom Pirates has ended with the defeat of the Akazaya Samurai.

The episode is titled Boiled to Death, Oden’s One-hour Struggle. Oden got captured, and his execution begins. Oden asks Kaido to set him free if he survives inside the pot of lava. Orochi insists on Oden getting inside the pot. Oden agrees and said he would get inside the pot and set anytime limit, but they must free them if they survive. Orochi laughs, calling Oden an idiot since the lava will kill him instantly. Kaido accepted Oden’s offer and told his underlings to bring him a watch.

Previously on One Piece Episode 973

Orochi is surprised that Kaido is accepting what Oden is saying. Kaido comments that it will be fun. He announces that he is giving Oden an hour, and Oden accepts. Oden asks if they will keep their words. Kaido promise that he will let them free after an hour. Oden steps forward, and Kinemon tells Oden to wait. Oden ignores them and jumps inside the pot. Kinemon told the Akazaya members to follow their lord. Oden notices that these guys will not hesitate to jump in. He told them to stay in the position.

He destroys the plank and carries them above his head as he continues to burn inside the pot of lava. Oden is protecting them for only him to feel the pain. The minks told Oden that they could try switching places and feel the same pain. They all want to hold him and Oden insists on holding them. But they are helpful to him since he is not focusing on what the lava is doing to him. When they are talking with him, they are making him feel better, and they scold him, and he scolds them back.

Oden told them to shut up and stay on the plank. Kanjuro comments that it is their duty to protect their lord. Orochi is surprised to witness the chaos happening inside the lava pot. He can’t believe that Oden is carrying his crew while he is burning. Kaido comments that all 10 of them are inside the pot. The countdown begins as Kaido does his evil laugh ”Orrrorrro.” The citizens of Wano are surprised that Oden is surviving and is not burning, but he is sweating. Kaido notices that Oden is showing that face of feeling pain. 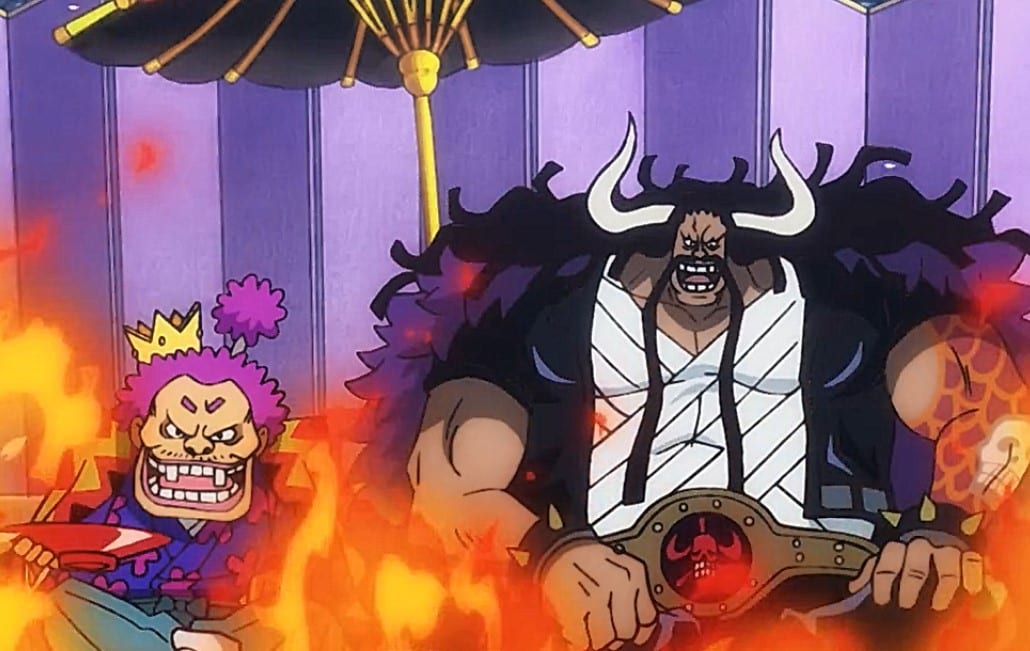 He asks Oden if something is wrong, and it hasn’t been even a minute when Oden is inside the pot. Kaido’s men comment how Oden’s skin can endure that. Raizo comments that he feels like he will die from the heat. The minks scold him that they are in a plank, and Oden is inside the pot feeling the pain alone. Cat Viper told Raizo that he would beat him if he whines like a loser one more time. The citizens realize that this will take longer, and they thought they would scream more and die in an entertaining manner.

One of the punks comments that he has the stuff to do and told Oden to hurry up and get done with this. The guy calls Oden a silly lord in front of Shinobu, who slammed him with the ground and breaking in the execution ground. Shinobu opens up about Oden, and Orochi got surprised. She reveals that if they lose Oden, everyone will realize how much suffering got prevented. She also said that Orochi is not the Shogun or dictator. Orochi reveals that he became a Shogun to destroy this country and get his revenge.

He reveals how he makes Oden surrender by taking the citizens hostage. Kaido surrendered that day since he realizes that the citizens will be killed and still want to be with their families. That day Oden was forced to choose between a war and citizens’ life. Oden chose the citizens and accepted to dance naked in public. Each dance worth a life of 100 citizens. But Orochi and Kaido were fooling him all the time and didn’t fulfill their promise.