Kaidou Proves to be Undefeated in One Piece Episode 1006 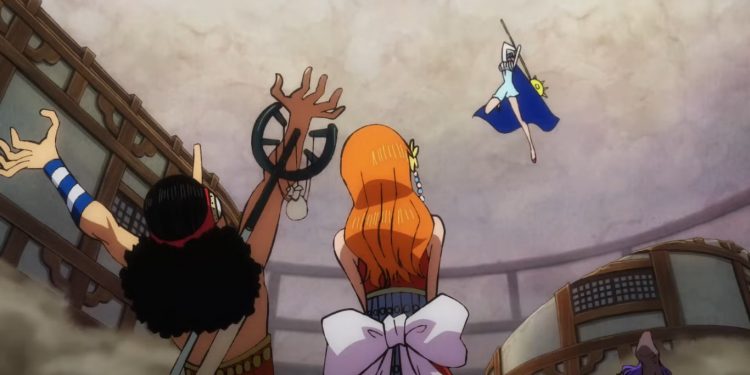 2022 started well with One Piece Episode 1006, continuing with the ongoing Onigashima raid. The anime has released a bit and took things slowly, so at this time, the raid is still in its early stages. We have had some mind-blowing episodes, and more are yet to come. Unlike the manga, the anime has added some special effects in several episodes to produce some epic scenes as the scabbards face Kaidou without any interruptions.

After the year-end schedule experienced some delays in the anime episodes. Things will get back to normal, and we will receive new episodes without any notable delays in the near future. Instead, we will look forward to how the anime will progress in relation to the manga chapters being adapted. Wano Arc is filled with lots of action, so this means the anime will run a little bit slower and adapt around one to one and a half chapters per episode.

So we will be really lucky to get an episode that will adapt two or more chapters due to the details in each manga chapter. Nonetheless, the action will be worth it, as we have seen in the last episode where the scabbards managed to pierce Kaidou’s hide. Even though he later pointed out that their cut was too shallow compared to what Oden did. We managed to see great effects showing Kaidou bleeding a river of blood, something that the manga did not put much emphasis on.

Kaidou vs. the Scabbards: One Piece Episode 1005

The raid just got intense in the last episode of the anime, and Kaidou seems to have finally taken some time to unleash some of his powerful attacks. Due to the full moon above Onigashima, the minks proved unstoppable and managed to defeat Jack without much effort. After seeing this, Kaidou stepped in and relieved Jack of his duties, leaving Kaidou 1 against the 9 scabbards.

Knowing his might as the Yonkou, this would seem to be insufficient as he quickly thwarted all of the scabbard’s attacks. In fact, he seemed to be just toying around with them and did not take them as seriously even when they had unleashed their most powerful combined attacks so far.

They managed to push him down, leaving him with a bleeding wound. But to Kaidou’s eyes, they are just empty husks who imitate Oden. We saw this when Kaidou unleashed powerful slashes that easily disorientated them leaving Okiku with a severed arm. And now that they are in Shambles, it would appear that their defeat is near.

Meanwhile, Luffy is trying to make his way to the rooftop. But at the rate things are going, this would take him a while. On the live floor, Queen has unleashed his newly developed virus on the populace. Without sparing friends or foes, he is only focused on creating chaos and making sure that everyone in there dies. Everyone infected is on a rampage and kills without discretion. But Chopper’s arrival might bring hope as he is the genius doctor of the Strawhats.

Jinbe has also made an entrance, and together with Sanji, they are determined to make sure that Luffy saves his energy for the final showdown with Kaidou. Everyone else seemed to be busy on their sides, but Robin appeared without much to do on her side.

Page One and Ulti on Rampage: One Piece Episode 1006 Preview

Getting a glimpse of what will be coming with the next episode. We managed to see a brief showdown of what was happening in the other rooms within Kaidou’s mansion. We have several sides that we have received updates from, like what is happening with Big Mom, Perospero, and Marco. But for now, the anime will slowly cover these scenes bit by bit.

First, it looks like we will get to see what is happening with Page One and Ulti, who are prepared to cause havoc. The next episode will air this weekend, so let us look forward to more details as the raid heats up.