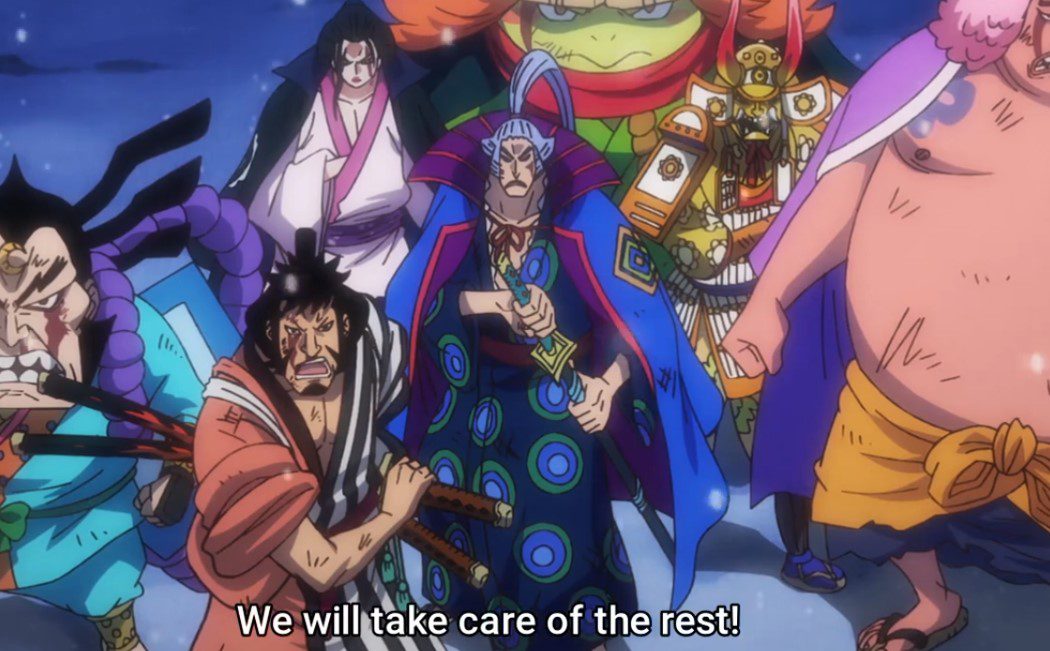 One Piece Episode 1002 reveals Straw Hats vs. Numbers. Luffy and the Samurai are trying to get to the rooftop to face Kaido and his underlings. The Minks vs. Number Fuga and Jack are underway after the Minks tell the Akazaya Nine not to interfere since they want to get their revenge. Luffy also tried to use Gum-Gum Rocket that failed after Queen blocked his path using a hybrid form. From One Piece’s latest episode, the Straw Hats assemble and decide to go all-out after punishing all the enemies on the ground.

The Samurai vs. the Numbers begins after Hyogoro tells his team that they will never lose. X Drake and Basil Hawkins appear in another room; X Drake looks at the ground and notices that everything has changed after Straw Hats has arrived. He wonders what will happen when Big Mom and Kaido declare their alliance. But he is glad that the Straw Hats has created confusion that is advantageous to him. Hawkins is reading his cards and looks at X Drake. He has some wounds on his head. On Queen’s side, he gets furious after knowing that it is not only the Straw Hats.

Queen realizes that the Udon’s prisoners are also fighting, and they will pay. Hyogoro comments that he is also here, and Queen wonders what happened at the Excavation Labor Camp in Udon. He believes that Babanuki was threatened since he told him something different. King landed near Queen and decided that he would not blame Queen since a moment ago; everything was okay before the enemies showed up. But Queen has been brainless, and they have to fix the problem quickly. X Drake and Hawkins continue with their meeting and talk about the chaos in Onigashima.

Previously on One Piece Episode 1001

X Drake asks Hawkins to tell if this is a good chance, but Hawkins believes that if enemies approach him, he will slice them, and he knows nothing about chance. X Drake talks about Hawkins’ loyalty to Kaido since he never knew about that. He wonders if Hawkins is forced to do what he is doing after getting fooled by Apoo. X Drake knew that Hawkins, Captain Kid, and Apoo formed an alliance, but Apoo betrayed them. He believes that Hawkins is unwilling to join the Anima Kingdom Pirates; Hawkins wonders if X Drake encourages him to betray them.

He talks about a man who has one percent of survival until the next day, and he feels sorry for that man. X Drake receives a call from King, who is summoning all the members of Tobi Roppo. Ulti thinks that King is boring and wonders what he wants. But King reminds them about the situation that has changed. He also talked about the annual Fire Festival and that they let the Akazaya Samurai invade the Onigashima. This has never happened in Onigashima’s history, and it is embarrassing. King reminds them about Yamato and that the one who brings Yamato will challenge them as the Lead Performers for their positions.

But he is postponing that for now since Kaido is at the top roof of the dome, and they must block the enemies from reaching Kaido. Who’s Who visited Drake and reminded about the opportunity and asked him to come with him. X Drake wonders where Who’s Who is going. But he reveals that he wants to kill what he wants to kill, where Queen is. X Drake doesn’t want to get involved in Queen and Who’s Who rivalry.

One Piece Episode 1002 will be released on 5 December 2021. Who’s Who thinks that Queen is useless and X Drake likes the way things are going. The battle on the Live Floor continues as they behead each other. The Numbers are also trying their best. Who’s Who reaches where Queen is, and the trio betrays him. But they end up shooting X Drake’s shoulder. Hawkins reveals that X Drake has one percent of survival. Let’s look at One Piece Episode 1002 official details.

Who’s Who believed that X Drake let Trafalgar Law escape in the Floor Capital. They decided to kill X Drake, who used a bomb to escape. On his way, he used signature moves and killed the Numbers. Luffy enters Gear Third, uses Gum-Gum Kong, and kills the Numbers simultaneously with X Drake. He asks Luffy to let him fight on his side. Let’s meet when One Piece Episode 1002 is released.