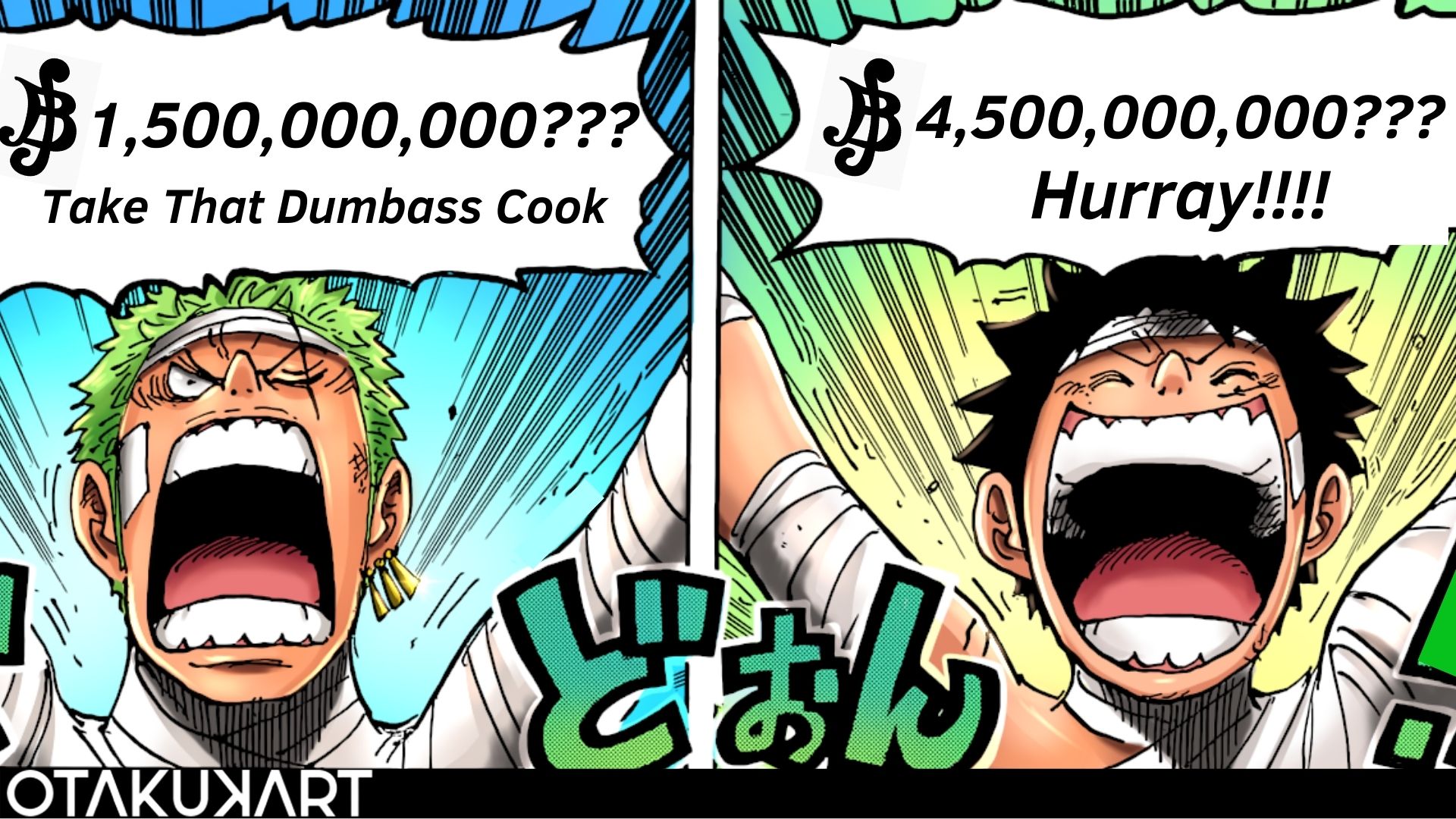 What Are There New Bounties?

One Piece is on a roll these days, with the manga nearing the end of the Saga, as Oda-sensei stated before taking a month off. Nonetheless, One Piece Chapter 1052 included an unexpected twist that kept fans on the edge of their seats. Oda-sensei has done this previously, and we suppose he enjoys seeing us bite our nails. The indication of Straw Hats and other pirates’ new bounties, as well as one of the mystery figures, Ryokugyu, the new admiral approaching Wano, were the two most thrilling occurrences from One Piece Chapter 1052. The events that occurred after the war began, and One Piece Chapter 1052 was the much-needed chapter that everyone was looking forward to.

The One Piece Chapter 1052 cover page continued with Germa’s Voyage, but Ceaser was also shown hiding from the Germa siblings. The Five Elders discussing Nika and the fate of the two emperors was the first feature of Chapter 1052. Even if they tried their hardest, they wouldn’t be able to conceal the news. The invasion of the land of Wano, according to Five Elder, will be difficult even with their numbers. CP0 was observed near the Wano sees again, reporting to the Five Elders and discussing the capture of Nico Robin.

Hawkins approaches X Drake after the defeat of Kaido in Wano, and they discuss the battle’s aftermath. Hawkins informs Drake that the survival of the one percent was about himself, and he did not swap sides out of pride. Then there is a 7-day time jump in Wano, and the entire country is excited about another event that will take place shortly. The Wano schools are transforming, beginning with history courses regarding the legendary Samurai Kozuki Oden. The news of Luffy defeating Kaido has traveled across Wano, and he is now known as “Warrior JoyBoy.” 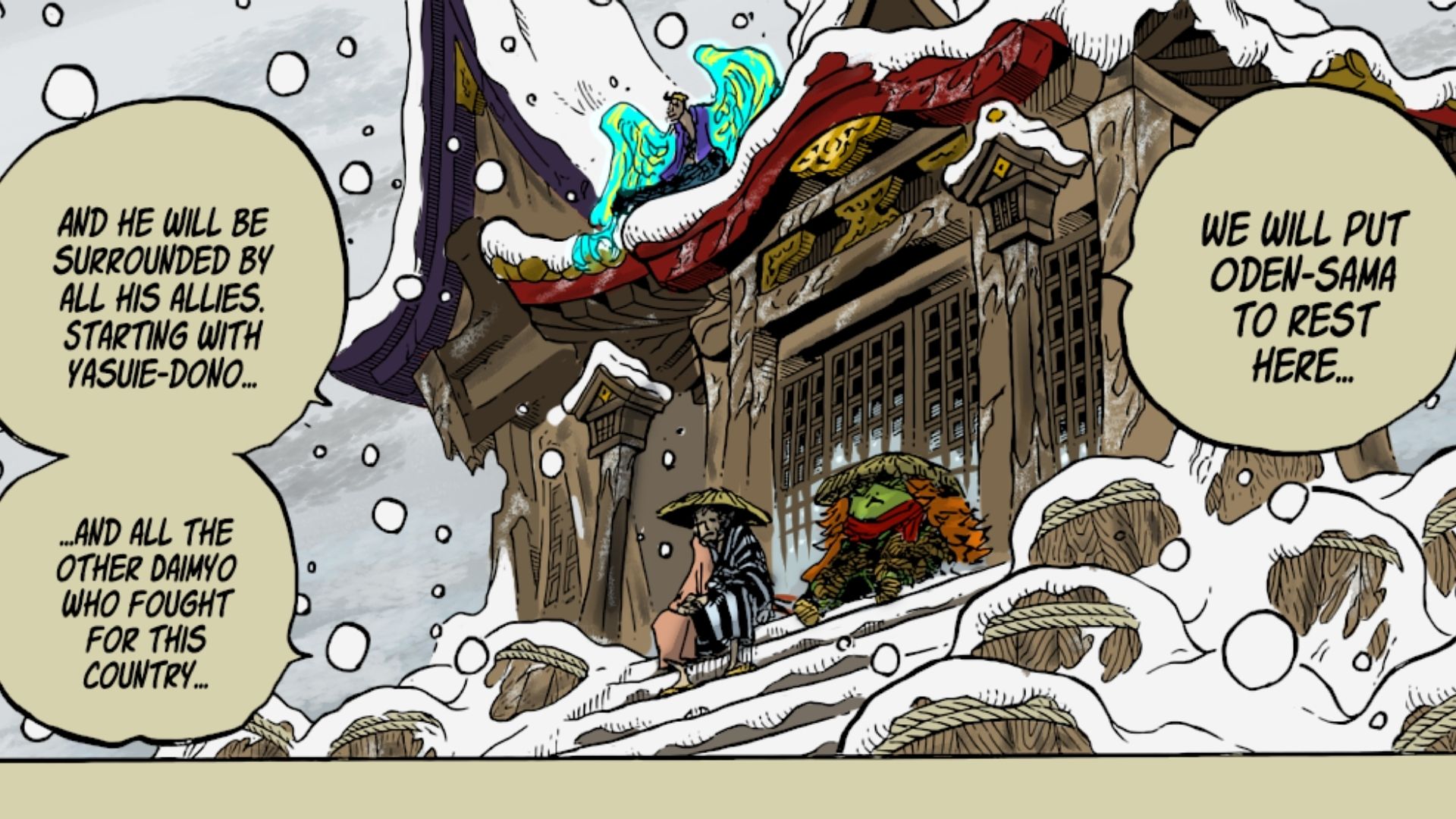 On Ringo’s eternal grave, Kawamatsu and Kinemon discuss what honor it will be to lie here alongside Ryuma and Oden after their deaths. Along with Ashura Doji and Izo, they will place all legendary characters in the eternal graves.

Yamato tells herself she isn’t hungry as her stomach growls at the Flower Capital’s citadel. Hiyori informs Momo and Yamato that Luffy and Zoro have awakened. They are already having a modest feast when they enter the palace. Momo advises Luffy and Zoro to preserve some space for later, but they do not recognize him. 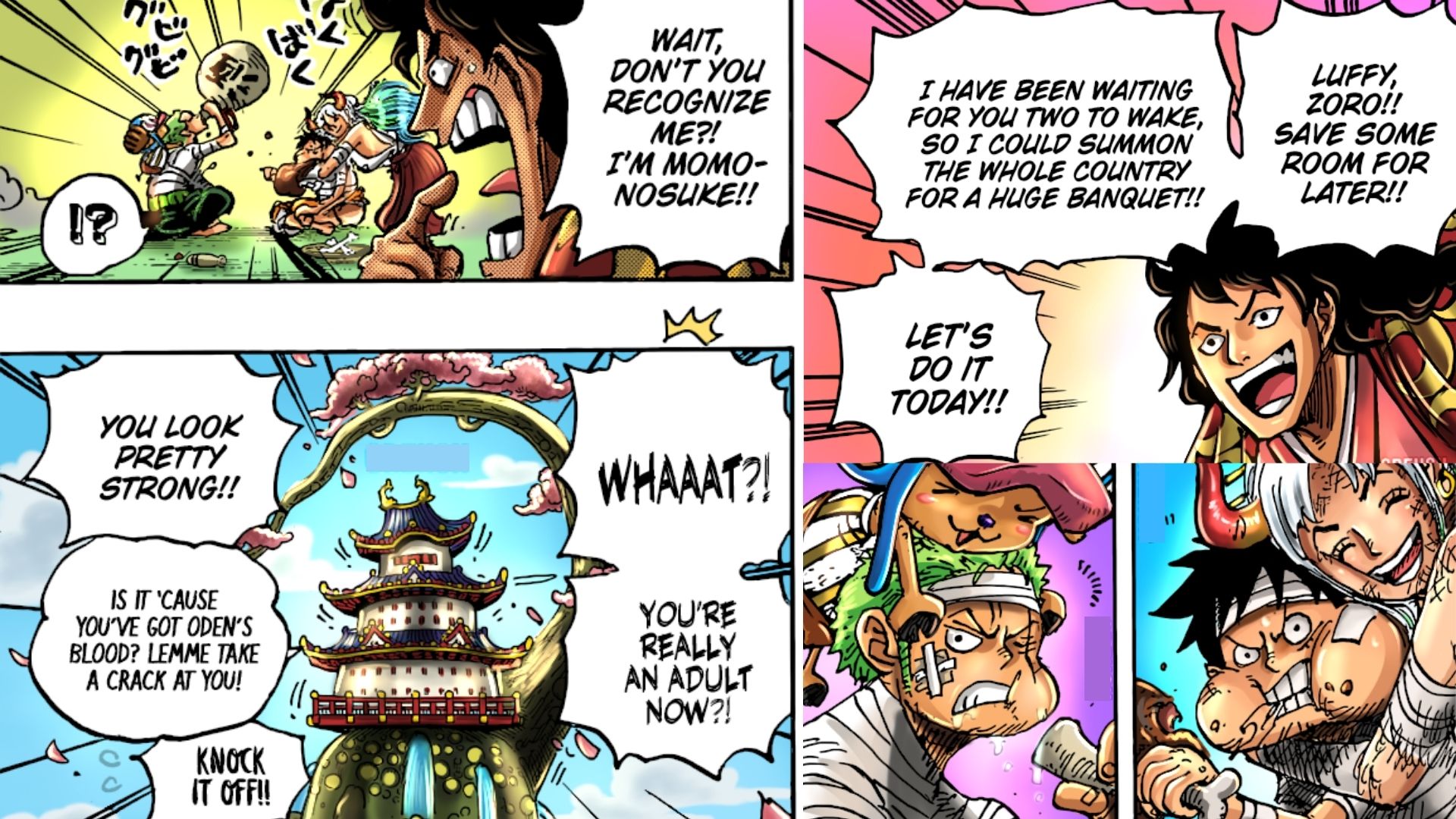 Momo goes up to Nami to console her, but she punches him and tells him to stay away from her, much to the delight of Sanji and Brook. The gang afterward takes a bath where Yamato is in the Male bath, which makes Sanji go crazy. 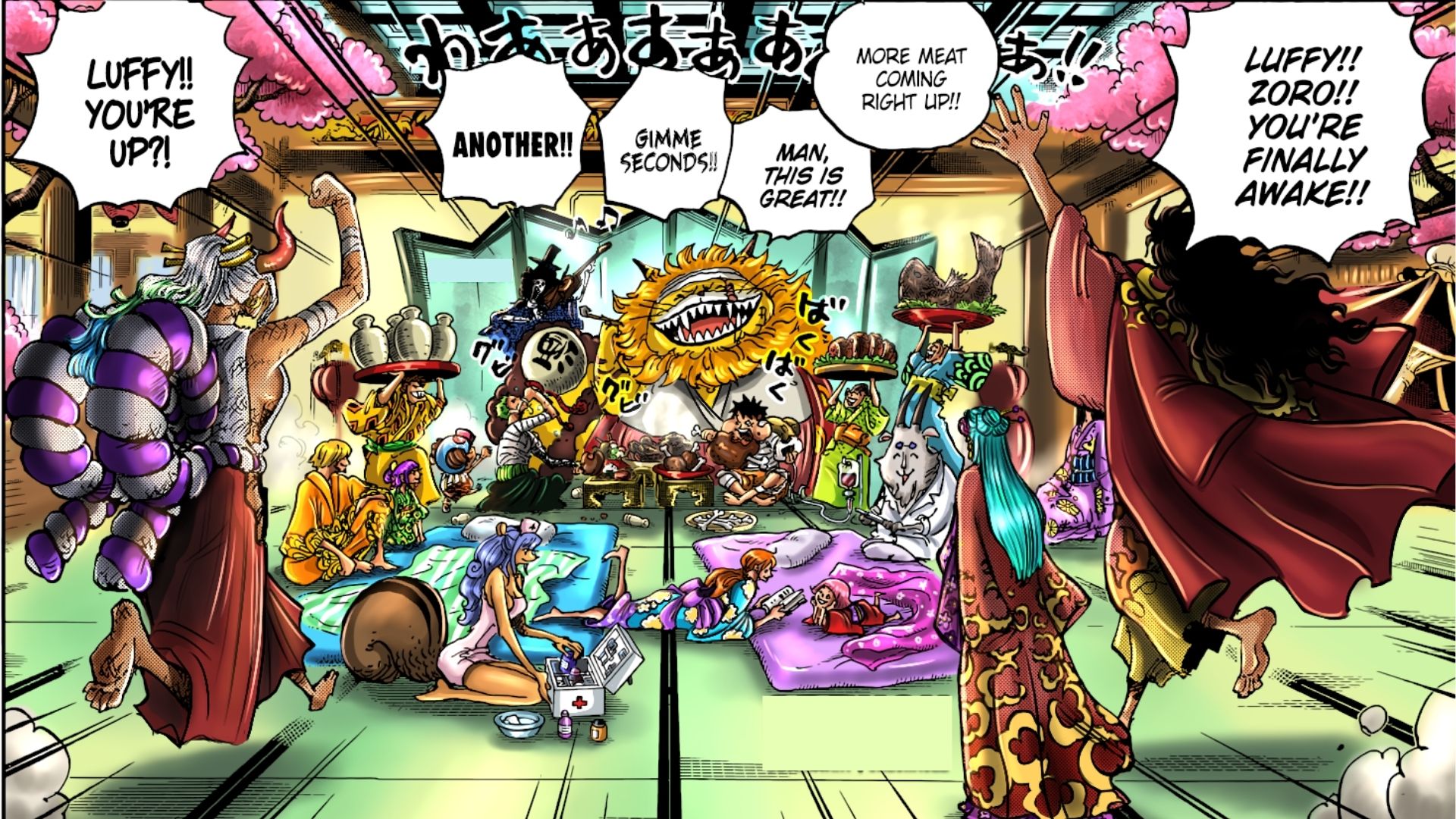 Franky and Ussop are seen in the Tokage port, where ship development is taking place. Kid warns his men not to befriend the other pirate crews and discusses the potential of their win being leaked outside of Wano. They’ll have even more targets on their back now that they’ve brought down two Emperors. Then Appo appears with a Number Inbi and informs them that their news has already been released. Kid believes Appo personally released the information. He brings in the newspaper that we all craved, complete with updated bounty and new identities named the Emperors of the Sea.

The final panel of the chapter depicts a shadow of a figure flying through the sky. He is chatting with Fleet Admiral Akainu and informs him that he can see Wano ahead of them. “Not to do anything unnecessary… understand Ryokugyu?” adds Akainu. Admiral Ryokugyu is shown in a close-up from behind. 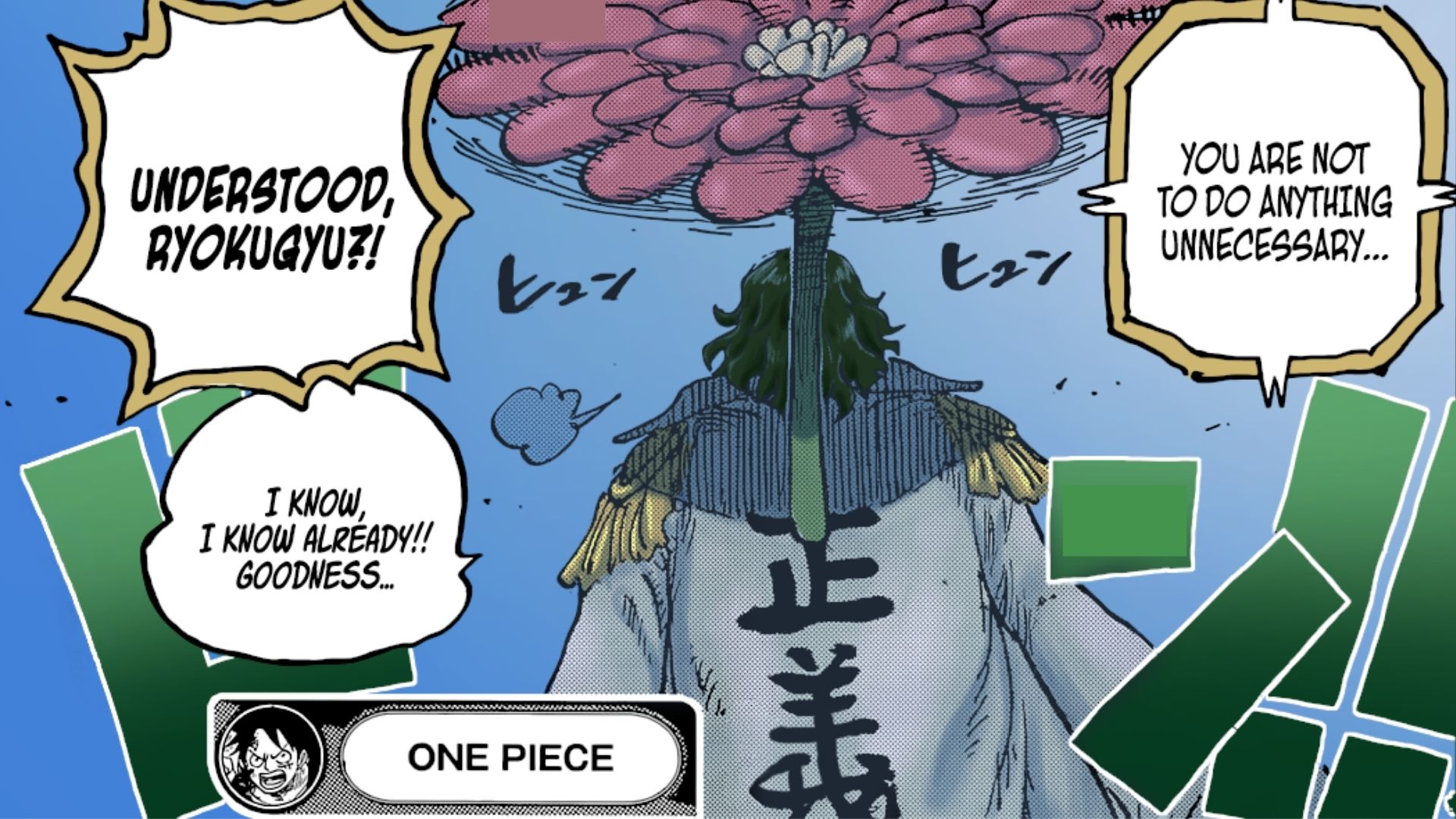 Where To Read One Piece Chapter 1052?

One Piece Chapter 1052 will release on Sunday, 12th June 2022, approximately at noon EST. Once it is released, you can read it on Viz and Mangaplus websites for free.