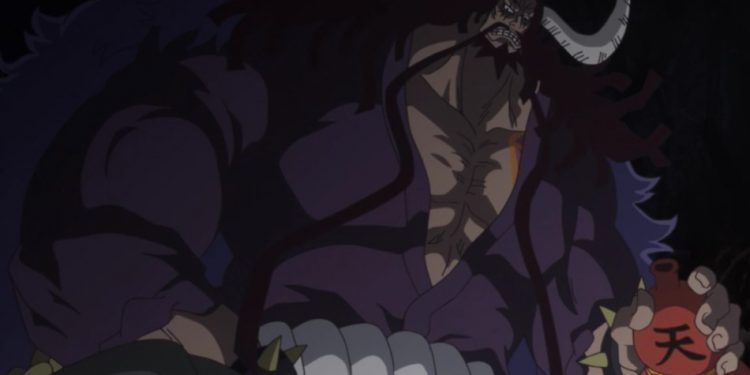 One Piece Chapter 1038 returns soon since the manga has recently delayed it. The next three chapters will release in a row. Looking at the latest updated spoilers, Kaidou vs. Luffy has been explained in full summary. The battle continues after Zoro, King, Queen have settled their scores. The recent chapter was titled Shuron Hakke, revealing the true powers of Kaidou’s dranken form. The chapter begins at the Flower Capital; the citizens still enjoy the festival, knowing that it will soon. The kids and their families wrote the wishes on paper lanterns and sent them to their ancestors.

Meanwhile, at the rooftop of Onigashima’s castle, Luffy and Kaidou stop fighting, and Luffy wonders why Kaidou took a human form. But he noticed that Kaidou wanted to drink alcohol. Luffy scolds Kaidou for drinking while they are fighting. He asks Kaidou and Kaidou replies that he has to drink since he has fun. Kaidou reminds Luffy that it is the “Fire Festival.” He is pissed off since he knows that at Onigashima, they also throw a great banquet that some brats have ruined. Luffy confronts Kaidou and tells him that he won’t claim that he was drunk if he loses. Kaidou laughs at Luffy and uses his Kanabo to balance himself.

Kaidou told Luffy that he is not weak even when he is drunken. Luffy uses a ballon giant’s right arm and attacks Kaidou. Kaidou realizes that he spent many years without fighting 1v1. He dodged Luffy’s attacks using Shuron Hakke: Sake Dragon Bagua. Kaidou transformed into a hybrid form and used drunken style against Luffy. He also unleashes Warai Jogo: Laughing Drunk Mode and hits Luffy with a kanabo and “Ragnaraku.” His attacks are also destroying the other part of the Live Floor.

Kaidou decided to use kanabo and called Luffy a stupid brat. Kaidou uses Raimei Hakke that Luffy jumps before it hits him. But Kaidou manages to grab Luffy’s leg, and they both headbutt each other. Luffy admits that Kaidou’s Haki is powerful. Kaidou’s drunken mode begins to wear out, and he enters Anger Drunk Mode: Okori Jogo and wonders why he is getting sober. Luffy survives after Kaidou release a Bolo Breath. But Luffy unleashes Gomu Gomu no-Roc Gatling. Kaidou also uses Gundari Ryuseigun: Gundari: Dragon Army. They both stop their attacks, and Luffy uses massive punches with Color of the Supreme King Haki.

Meanwhile, they meet at the Pangaea Castle at the “Holy Land Mary Gorosei.” The Gorousei 1 believes that the Reverie is cursed. Gorousei 2 suggests focusing on “Wanokuni.” They can’t believe that the battle has reached this stage. Gorousei 3 believes Nico Robin is the cause since she should have been arrested. They realize that someone will die if Kaidou and Big Mom are part of the battle. At sea, Wanokuni, the World Government’s member, reports by Den Den Mushi they talked about a gigantic shadow approaching.

One Piece Chapter 1038 will be released on 23 January 2022. At Pangaea Castle, the Gorousei with a birthmark on his forehead can’t believe it since he knew that the Devil Fruit had become a legend and had never been awake for past centuries. The short beard Gorousei with blond hair wonders why the World Government changed the name of that Devil Fruit. Let’s look at One Piece Chapter 1038 official details.