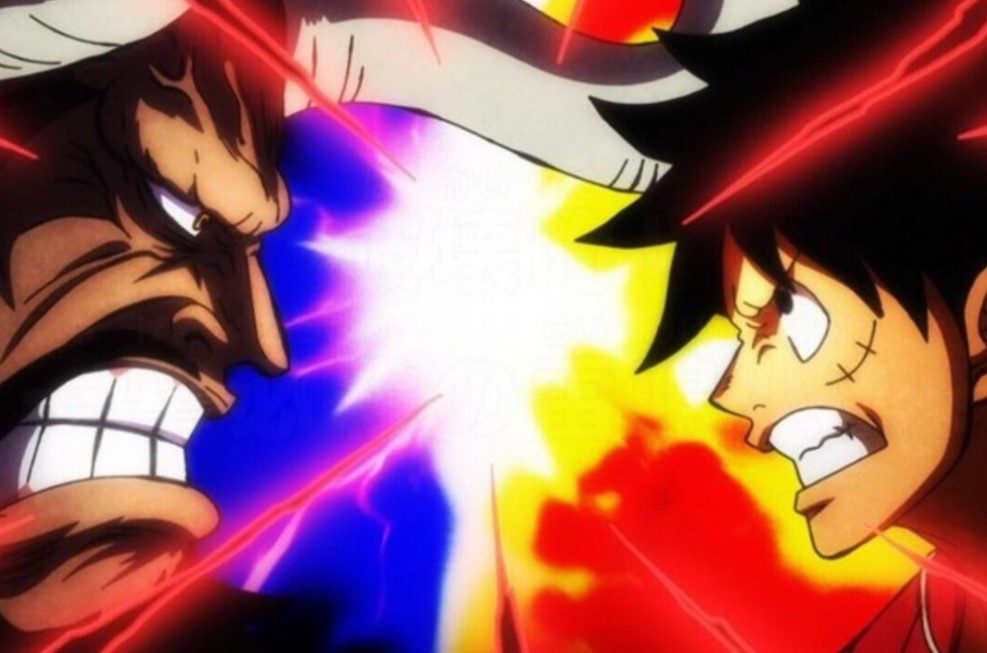 One Piece Chapter 1028 reveals the fierce battle in Onigashima between Luffy, Yamato, and Kaidou. The spoiler of chapter 1027 has been released earlier than we expected, but the manga won’t take a break this coming weekend. The battle in Onigashima continues since Luffy, Yamato and Momonosuke are working together to takedown Kaidou. The intense battle continues with One Piece Chapter 1028, with Law and Kid hearing Luffy’s voice and realizing that the captain is still in action. In the previous chapter, Kaidou took on his hybrid form while confronting Luffy. Kaidou told Luffy to give up since he would never beat him.

Luffy vows that as long as he is alive, he can defeat him. Kaidou unleashes Kanabo to smash Luffy, who manages to stop it using his fist. The two releases Color of the Supreme King Haki. After a massive explosion, Marry reports to his comrades about the outcome of the battle. Meanwhile, Inuarashi and Nekomamushi unleash Oden Ittoryu-Oden’s One Sword Style. Nekomamushi uses Smiling Cat Strike. Inuarashi attacks with Dog Powerful Cutting Arrow. They both smash Perospero with their attacks and manage to destroy his hat and leg.

Orochi received a report about Jack and said he had nothing to do with Jack. The chapter begins with Luffy and Yamato talking about Onigashima’s situation. The chapter title is “Danger beyond imagination,” related to Yamato and Momonosuke’s situation. Luffy orders Yamato to assist Momonosuke to stop Onigashima. But Yamato realizes that Luffy wants to clash with Kaidou on a one-on-one duel. She realizes that that is Luffy’s resolve regarding the situations they are in for now. Let’s learn more about Yamato and Momosuke’s situation below.

Previously on One Piece Chapter 1027

Yamato accepts what Luffy has told her and decides to explain how powerful Kaidou is. She talked about Kaidou’s Devil Fruit powers and revealed more information about her father. Devil Fruit powers: “Dragons don’t fly; they run through the skies by grabbing the clouds they create.” The clouds that the dragons run through are called “flame clouds.” Stones and debris start to rain from the flying Onigashima. Yamato believes that Kaidou’s power is decreasing, but his “flame clouds” are unstable. 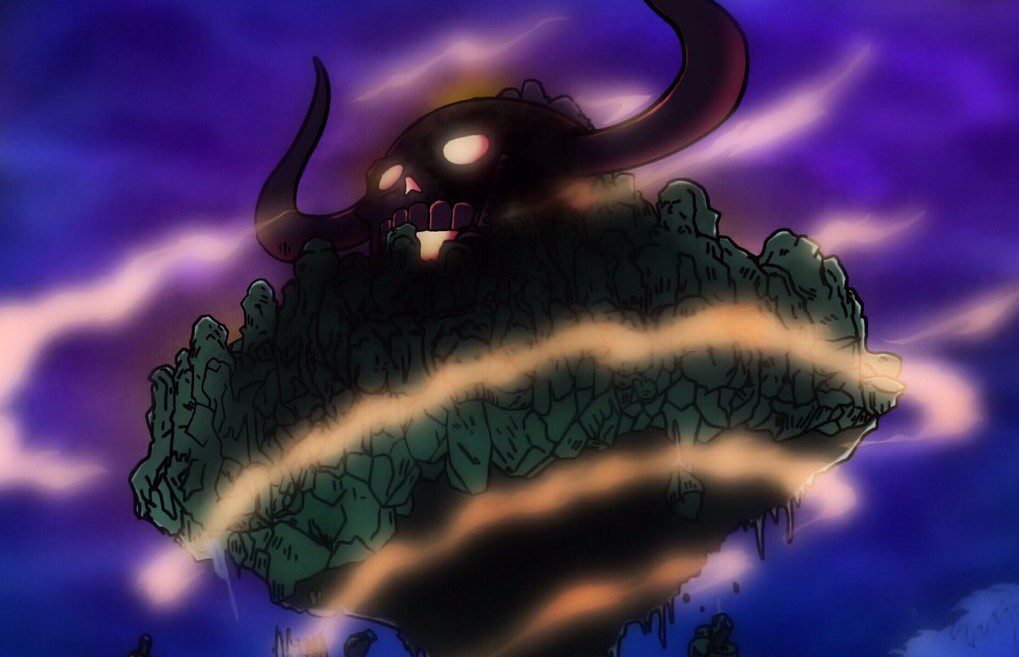 They realize they had to do something to stop that and think that Momonosuke needs to summon his own “flame clouds.” The flame cloud will help to hold Onigashima, and that could crash in the Flower Capital. If their plans work, the Flower Capital will get saved. Cut to Zoro vs. King, the intense brawl continues, and King has taken another form. King is furious and desperate while smashing both allies and enemies. He unleashes air-slashing attacks and brutalizes everyone around his area. Zoro blocked the attack using his swords. Zoro unleashes a powerful thunderstrike that breaks King’s mask.

That was the new technique he used to destroy King’s mask. The attack is called “Ultra Tiger Hunt.” King fires back and sends Zoro out of the Onigashima’s castle, taking the battle outside. Zoro almost fell out of Onigashima, but he managed to keep his balance and told King that he could kill him using a sword or he wouldn’t forgive King if he died with another thing. King replies that even if one of them dies, he will never forgive Zoro. In the next chapter, the battle continues where Luffy vs. Kaidou will take another level, and King will still face Zoro. Since they came out early, the latest spoiler had few to offer. 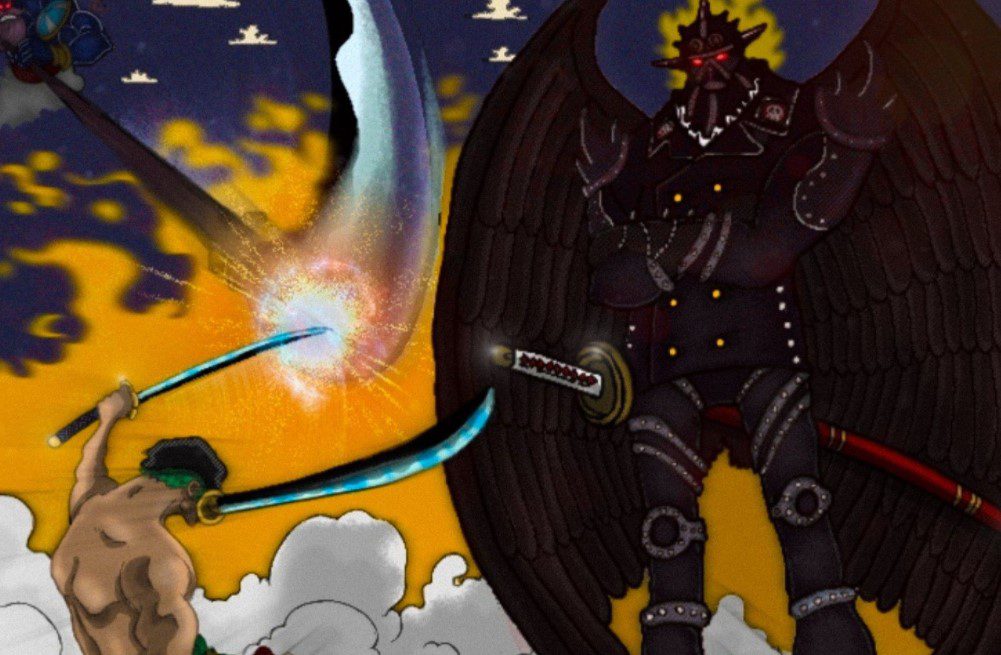 One Piece Chapter 1028 will be released on 10 October 2021. The manga is not taking a break, and the spoilers of chapter 1028 will release this coming week. One Piece manga spoilers are running at a fast pace since they keep on getting updated every week a few days before the latest chapter releases. Yamato and Momonosuke’s situation will be revealed in the latest upcoming chapter. We will see Luffy and Zoro’s side since the manga will be focusing on their battle for a while.

You will be able to read One Piece Chapter 1028 online on VIZ Media’s official website on Sunday at 18:00 JST. The manga is also serialized on Shueisha’s online magazine, Shonen Jump+, and currently releases new chapters every Sunday. One Piece releases its new chapters an hour before the latest release on various official websites like Shueisha’s online magazine. Let’s meet when the spoiler of the next chapter release, and that is when we will be updating the next chapter of One Piece.