One Piece Chapter 1019 Spoilers: What is Yamato’s Hybrid Form? 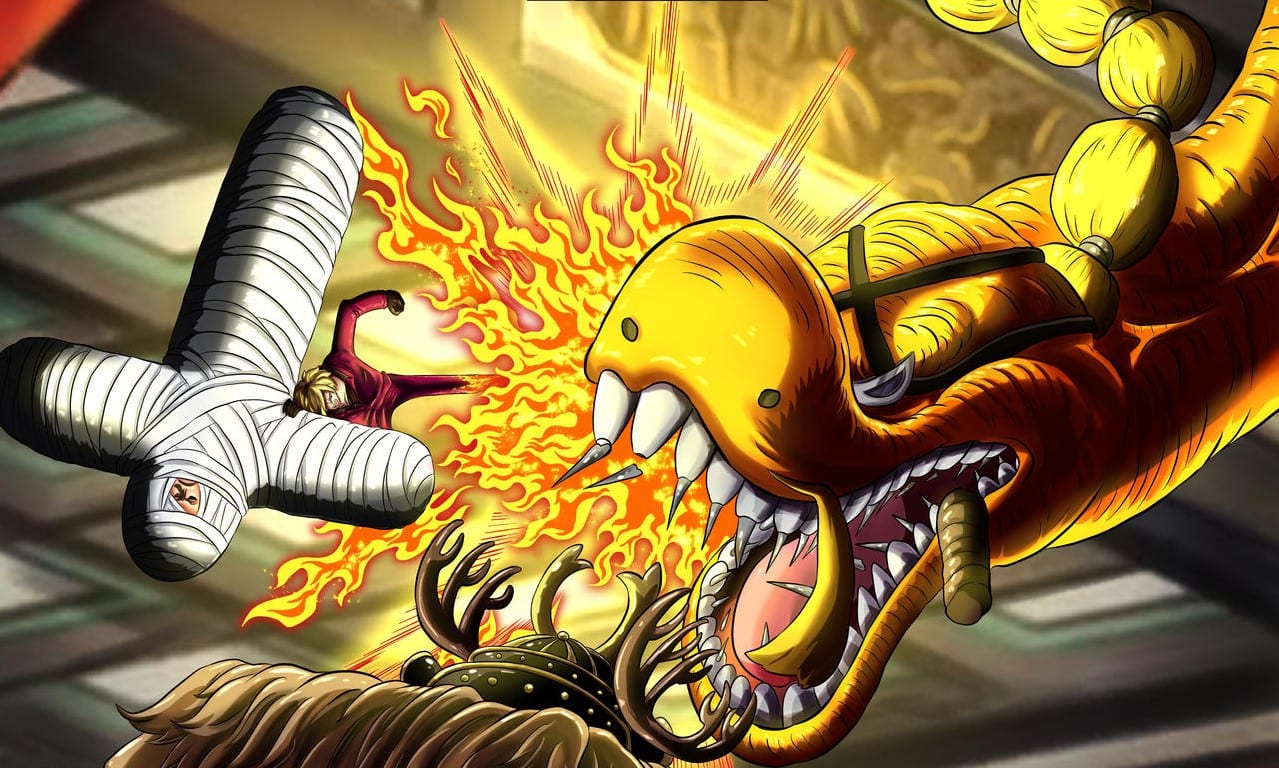 One Piece 1019 spoilers came late once again for this week, just when the anime returns from its first break. July will have the fewest possible chapters we can get just as Japan goes to Olympic breaks next week, and this will affect manga and see some of the anime episodes delayed by a week. To get a full chapter schedule for this month, you can read the One Piece Chapter Schedule for July. That is where you will be able to see all of the upcoming manga breaks, so you don’t get surprised when a break just appears out of the blue.

Looking back at the business of the day, One Piece 1019 spoilers have been released, and we will be looking at the latest updates at this point. The recent manga chapters put Jinbe and Who’s Who in the spotlight, and most fans are looking forward to the developments on that end. It looks like Who’s Who was easily defeated. Well, at least that’s what the last scene of his fight with Jinbe went, so the next time he appears, we will know for sure how things ended up.

It will be an easier fight for Jinbe if this is the end of it. And as one of the Tobiroppo, one would wonder if  Who’s Who can be defeated this easily. So far, we have seen the resilience of the Ryu Ryu-nomi devil fruits, and they seem to be persistent no matter how much damage they take, so it will not be completely surprising if Who’s Who has survived Jinbe’s attacks.

One Piece 1019 will officially release this weekend, but more spoilers will be released throughout the week and will end with the release of the full scans by Friday. The official English sites VIZ Media and Manga Plus will distribute free chapters on their website this weekend.

Full summary thanks to Redon courtesy of One Piece Subreddit.

The chapter will be titled “Heliceratops.”

On the Color Spread, the Straw Hat Pirates (with swimsuits and bikinis) ride some whale sharks in the sea.

The chapter starts in the “Live Floor,” where Queen is shooting Sanji multiple beams. Sanji avoids them while smiling; he thinks that Franky would want Queen’s body tech. Dr. Miyagi prepares an injection to give Zoro their secret medicine. Minks are going to stab Zoro hard enough to get through the bandages Sanji did. Zoro is freaked out (probably because he is afraid of injections?).

In the Hearts Pirates submarine, the Heart Pirates finished pumping water out of Luffy. They wonder what medicine they should give him. Suddenly, Luffy shouts.

We see that the Gifters from Armored Division are now fighting against Sasaki subordinates. They are helping Franky while as he fights Sasaki in a one Vs. one fight. Sasaki says that Franky’s robot is very tough; Franky returns the compliment and tells him that he is tougher than he thought. Sasaki decides to transform to his hybrid form. Sasaki keeps the Triceratops’ head, but he retains his mane. The top half of his body is similar to his human form (he has tattoos, a big belly, and long arms ) with dinosaur skin. And the bottom half of his body keeps the rear legs and the tail of the Triceratops. He still has the V-shaped scar that Franky gave him on his stomach.

Sasaki draws his sword; it has small blades along the edges. The small blades start to spin, causing the sword to transform into a kind of drill. The sword’s named “Karakuri Rasentou” (Meaning Mechanical Spiral Sword). Sasaki looks up, and suddenly, the frill bone of his Triceratops head begins to rotate on his neck at high speed. This causes Sasaki to fly thanks to the fact that the frill bone acts like helicopter propellers. Seeing this, Franky is amazed.

Franky to Sasaki: “How the hell a dinosaur managed to do something like that!!?”
Sasaki: “It’s what Triceratops normally do.”
Sasaki uses a new attack “Heliceratops” (ヘリケラトプス) to take care of the Gifters from the Armored Division. Then he attacks Franky with his spinning frill bone and Saw sword. Franky deflects his attack with minor problems. Sasaki lands on the ground right infront of Franky Shougun, putting his sword away and preparing to protect himself. Sasaki will propel himself towards him at high-speed thanks to his spinning frill bone, but he makes a mistake, and instead of pushing himself forward, he does backward. There is some silence for a short time, then Sasaki says that he did it intentionally to get some pace for charging.

Sasaki runs at Franky Shougun with his new attack called “Tamaceratops” (弾丸ケラトプス – Bulletceratops). The attack is very strong that Franky Shougun’s rocket launchers on his left shoulder even explode. Franky Shougun grabs Sasaki and throws him with his the attack “General Suplex” (将軍スープレックス), and smashes him on the ground. Franky noticed that his blade leaves some wounds at Sasaki’s belly, so he thinks that part must be his weak point.

Franky Shougun takes out his “Franken” (フラン剣) sword and attacks Sasaki with the attack “Shouri no V Flash” (勝利のⅤ（ブイ）フラッシュ). However, Sasaki managed to dodge it by flying into the sky. Franky Shougun engages in a swordfight against Sasaki. Franky is inexperienced in swordfights, so it’s Sasaki who takes the lead and ends up breaking Franken’s sword. Given the situation, Franky creates some distance to charge his next attack.

Sasaki chased him and attacked him again with his “Tamaceratops.” However, Franky finished preparing in time to attack him with “General Cannon” (将軍 砲). The attack hit Sasaki and blows him in the air. Sasaki coughs up blood, but he still stands and counterattacks. Sasaki flew down and crashed on Franky Shougun using a new attack called “Magnumceratops” (マグナムケラトプス). The impact is so strong that Sasaki managed to destroy part of the Franky Shougun. However, Franky ejects himself out in time, catching Sasaki by surprise attack.

In the aftermath, Franky is lying on the ground and attacks Sasaki with his “Franky Radical Beam” that hits and pierces Sasaki’s belly. Franky is exhausted after this; Sasaki fell to the ground with his eyes rolled and bleeding from his mouth. Cut to the top of Onigashima’s dome scene, Kaidou (in hybrid form) fights Yamato (we only see their kanabo clash in 1 panel). They are talking while as fight.

Kaidou: “Yamato, I recognized you are a strong opponent! Although I did not plan for you to eat the devil fruit that I obtained with great difficulties!!”
Yamato: “I ate the devil fruit because I was simply hungry!! I wanted to sail at sea, but because of it, I am now unable to swim!!”
We then see a part of Yamato’s face in her hybrid form with a snout and sharp teeth.
Yamato: “I have tried to kill you countless times, but you’ve always defeated me!! However, it’s thanks to all those defeats, I’ve become stronger!!!”

On the last page of the chapter, we finally see Yamato’s hybrid form (it’s beautiful). In addition to the above, we also see that Yamato has pointed long ears and two horns that come out of Yamato’s forehead (they look the same from the base form but changed positions). It looks like Yamato’s body has fur; her hands are big and look like they have claws. Her legs are like that of an animal. Finally, we see there is fire around Yamato’s body and hair (same as the smoke that Luffy has around his body when he uses Gear four), yet some of that fire comes out of her elbows and knees.

We do not know the true name of her devil fruit. Maybe it’s the Byakko model or Kirin model (or something else). Yamato continues. Yamato: “There’s a reason that I didn’t leave this place, other than that handcuff!! If I don’t fight for this country, I have no right to call myself “Oden”!!!”

Although the chapter will be centered more on Franky vs. Sasaki’s fight, it looks like the highlight of the moment is that Kaidou and Yamato’s fight continues, and then we will be able to see their fight continues. Yamatos devil fruit appears for the first time in the manga along with her hybrid form.

So hopefully, we will get to know more about her devil fruit and its powers. The influence of Kaido and his proficiency as a devil fruit’s smuggler is once again touched upon as he reveals that it was very difficult for him to get Yamato’s devil fruit. Although Yamato reveals that she ate it because she was hungry, it looks like Kaidou meant to give it to her, but Yamato ate it before Kaido has fully decided on it.

On the other hand, Franky has decided to go after Queen’s tech as a fellow modified human. So it will be interesting to finally see how this will further develop in the upcoming chapters. And with Sasaki attacking Franky, he might be at a disadvantage as he now targets Queen. Well, we will see how this develops as the chapters go. Another thing to note is that Zoro will be coming back, so we will also see how he will contribute to the ongoing war.

Taika Waititi Net Worth: Who Wealthy is The Famous Director?