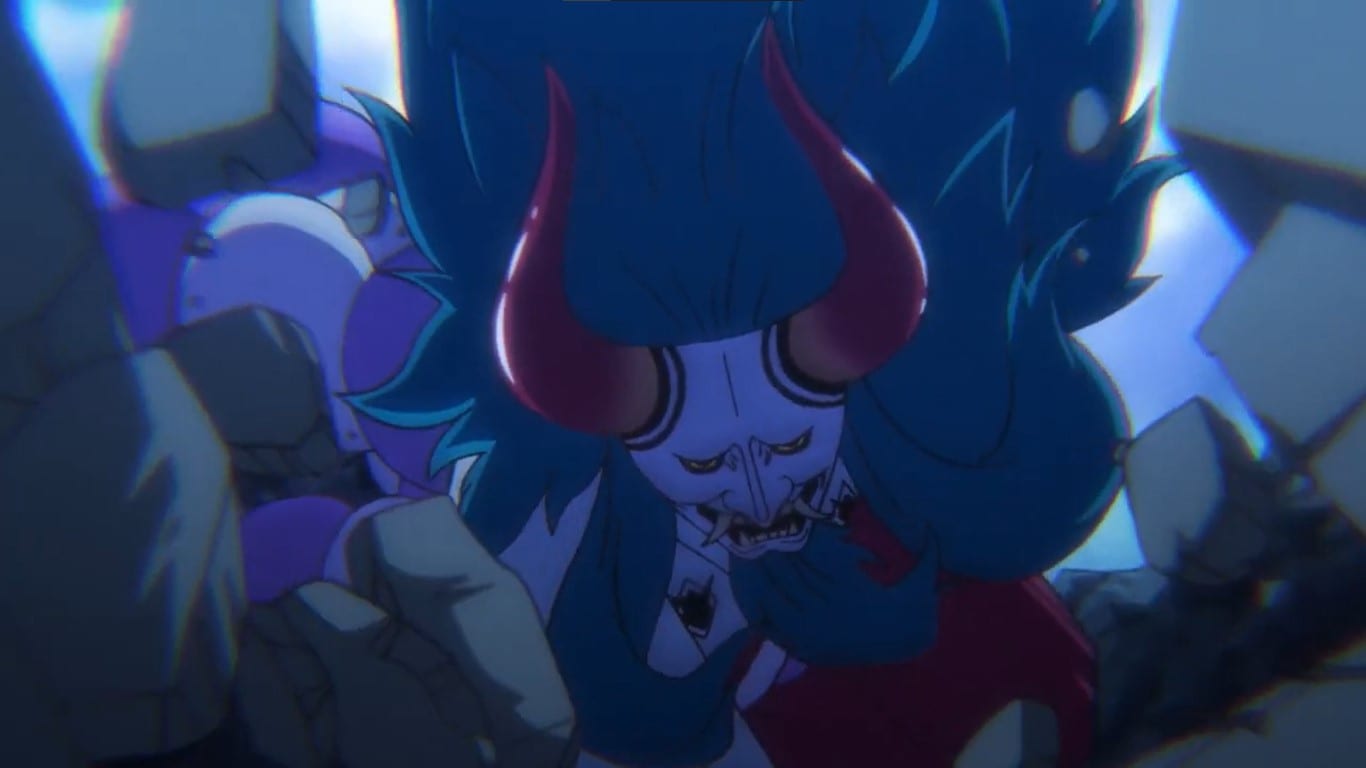 One Piece anime teased a short cameo of Yamato in the recent episodes of the anime, and for the first time, we got to see her appearance in the anime. Yamato’s issue is rather controversial because, at first, it is revealed that it is Kaidou’s son. Well, at least that’s what Kaidou refers to her at the moment. So for anime-only fans, Kaidou has just started a search for what is known as his son at the moment.

Manga fans have seen this years back and wondered what the official color scheme of the character would look like once they appear. The recent opening frames have also included Yamato’s appearance, so if you usually skip on the openings, then there is a lot you are missing out on. Nonetheless, we will be looking at the recent episodes of the anime as the Onigashima raid continues.

The straw hats and co have successfully sneaked in the banquet in Onigashima, and next, we will see them try to blend in and execute their plans. So far, the strategy has been easy thanks to Law, who took advantage of Luffy and Kid’s rivalry. He plans to use this to their advantage, and knowing that they won’t listen to anybody and will cause havoc all over; then they will be a good decoy for him and the rest of the samurai.

The Samurai forces will surround Onigashima while Law and his crew go to the back entrance of Kaidou’s mansion via a submarine. So their plan has been laid out perfectly, and so fall, all is going well for them. From this point on, we will be fully exploring the manga contents, so if you are an anime-only fan, you should be wary of spoilers.

Yamato Appears in One Piece 982

After Tobiroppo appears in full for the first time in the anime, we got to see the inside of the island other than Kaidou’s lair. Usually, what we would see is the external skull with horns, and then the scene jumps to Kaidou, who throws tantrums about Luffy’s action while he drinks. So now the anime gives us more details, and we saw the live floor. Then after that, we managed to see the full appearance of the outside environment of the island. This means that we will see a lot of the Island from here on because everything will be happening inside the Island until the very end. 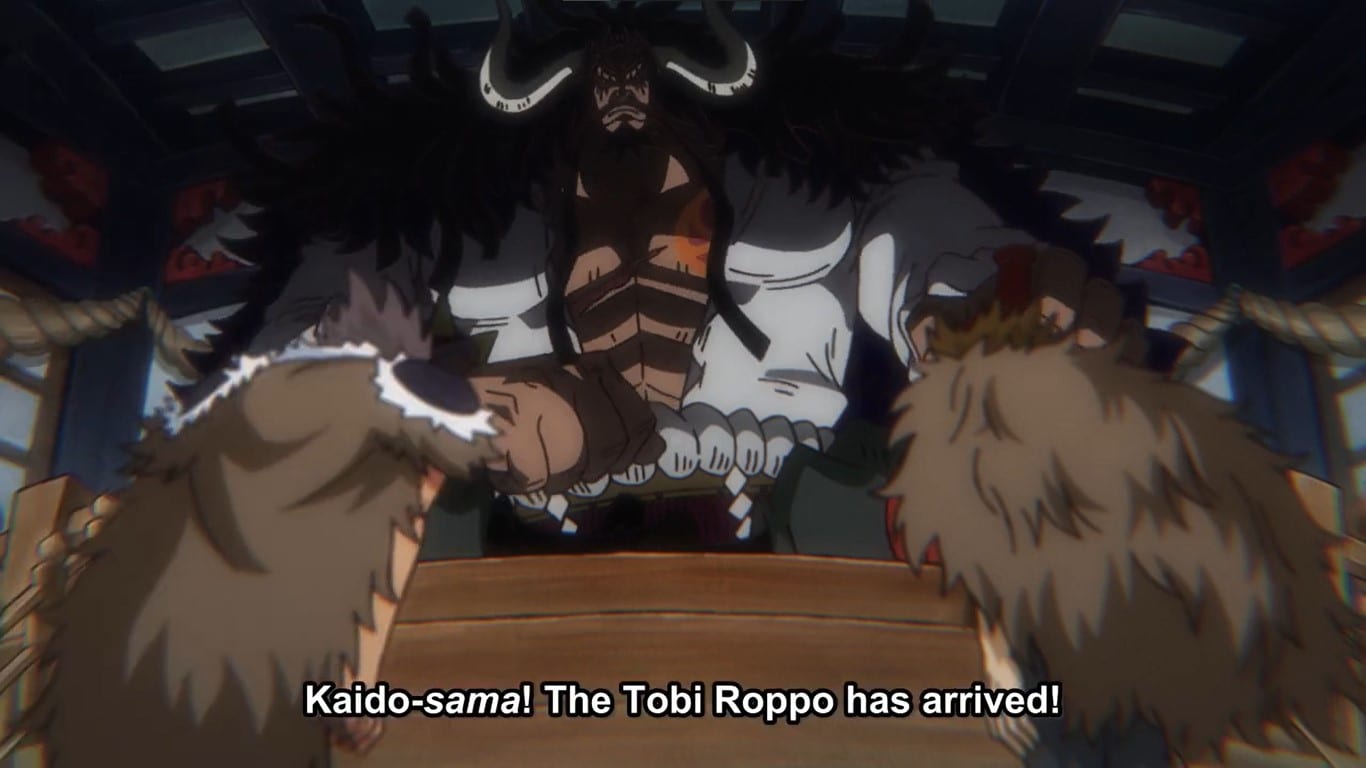 The Tobiroppo have gathered, but it turns out that Kaidou did not summon them to appear in one place. But this seems to be the works of somebody else. On the other hand, the quarrel between the Tobiroppo and their views on the All-Stars is already evident as they wonder who, amongst them, will become the next All-Star should one of them die.

Kaidou uses this to his advantage and launches out a search party of the flying six to go and look for his son, Yamato. After this, we managed to get a glimpse of Yamato as she appears for the first time in the anime. She appeared to be in some sort of distress and was taking it out by breaking a cliff with a weapon similar to that of Kaidou. To someone who’s seeing this for the first time, this creates an atmosphere where one would think that Kaidou’s son is some sort of very powerful delinquent. And of course, knowing that it is Kaidou’s son, you would expect him to be in full compliance with Kaidou and would present a powerful opponent.

The Tobiropo Search for Yamato

The Tobiroppo, or rather flying six, as they are known in English translations, are currently searching for Yamato based on Kaidou’s speech. So it should be interesting to see all the action surrounding that finally unfold in the anime. On the other hand, Big Mom is also present on the Island, and Kaidou wants all of the Tobiroppo to meet with her together with Yamato. So things will get busy soon; meanwhile, in the background, the samurai and their alliance continue with their sneak-in.

The upcoming episode of the anime will build more towards this. But it looks like it would not take long for Luffy’s cover to be blown out. One Piece Episode 984 will build upon that this weekend when it releases. The anime will be available online on streaming platforms like Crunchyroll and Funimation. The next episode’s preview shows a scene where Luffy is furious and is already picking out a fight with the gifters. Since people are wasting red bean soup and berating everyone else at Okobore town, we would understand Luffy’s anger and his actions afterward.

He has seen how difficult it is for people to get food back there. And after seeing how people waste food in the banquet, he felt he needed to teach them a lesson or two. Then this will lead to some string of events breaking out, and then their cover is blown. Well, we should wait till the weekend to see what more will come. But since we managed to see Yamato in the anime, even though she was behind a mask, it marks a good development towards the raid and character development.