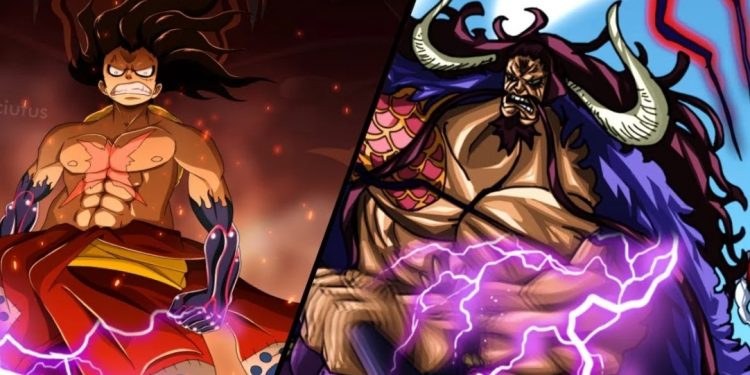 One Piece 1036 Spoilers has recently been released late, but the scans for the upcoming chapter will release since the manga will be taking a break. The fierce battle in Onigashima continues after Sanji beat Queen to a pulp while Zoro is about to finish King after learning how King fight and his weakness. One Piece reveals the brawl between Samurai and Beast Pirates in Onigashima Castle. This has been going on for a while, and Luffy and Kaidou are also back in the picture. In the recent updates of One Piece, we saw King vs. Zoro since the manga focuses on that after Sanji vs. Queen ended. The battle was intense for King, who decided to break his mask.

This happened after Zoro landed massive blows on King that cracked King’s mask. It was surprising to Kaidou’s underlings since they saw King’s face for the first time. We also learned about King’s name ”Arbel” who met with Kaidou at Punk Hazard Facility and destroyed everything then escaped. King believes that only Kaidou can change the world and become the Pirate King. Also, Zoro was supprises to find that King has a bounty of a hundred million berries. Kaidou’s subordinates know that they will be rich if they turn King in. But they couldn’t move due to Zoro’s Color of the Supreme King Haki that traped them.

Zoro almost loses his swords, but he takes them from King and uses Three-Sword Styles knowing that King is weaker. But King believed that no mere would dare take him down. We also saw Zoro’s new technique: Rengoku Oni Giri: Dragon King of the Three Flames. But King has realized that he has to end things quickly, or Zoro might catch him off the guard. The duel between the two continues, but Zoro has the upper hand. Let’s look at One Piece 1036 Spoilers and recent updates.

The title is “The Way of The Samurai Is to Find  A Place to Die.” Summary thanks to Redon, the action begins at King vs. Zoro as they exchange massive strikes. Zoro has found ways to take King down, and he was not hesitating. King vs. Zoro continues after Zoro lands a killer blow.

– Zoro defeats King after landing that killer blow, but we see King and Kaidou pass before Zoro takes King down.

– Number 6: Rokki, a guardian of the arsenal gate, also appears.

-Yamato and Number Fuuga have reunited, But she orders Fuuga to beat Number 6 Rokki.

– Usopp encounters a few enemies and fights them while protecting Kinemon and Kiku.

– Izou joins Usopp and decides to hold back the enemies

-Ussop escapes with Kinemon and Kiku.

– Raizou and Fukurokuju have blocked each other techniques that immobilized them, trapped and they can do anything.

– The CP0 has defeated Numbers Zanki and X Drake, but Apoo and the Numbers Inbi retreat.

– The CP0 reveals that if the Pirates of the New Generation defeat the Yonkou, it will show which direction the world is taking.

-Cut to Kaidou vs. Luffy that continues while they both go all-out

– Kaidou uses Kanabo to strike Luffy, but Luffy landed a massive punch on him which leave all of them falling,

– After hitting the ground, Kaidou and Luffy get up and laugh.

– Luffy says it is getting exciting, and Kaidou agrees.

Build Up To Luffy vs. Kaidou

Luffy vs. Kaidou begins in the previous chapters, where we saw Luffy returning to the battlefield with Momonosuke. Luffy and Momonosuke made Kaidou pay during the battle, and Momonosuke also got his hands on Kaidou. But Luffy decided to take Kaidou single-handedly since Momonosuke and Yamato have to care for falling Onigashima Castle that might crush the Flower Capital.

Luffy vs. Kaidou has been out of the picture for a while. But now, the battle continues as the two want to settle the scores once and for all. Luffy and Kaidou have exchanged many powerful strikes, but none of them has fallen yet. Luffy is about to show Kaidou new Haki power as the battle continues. The upcoming updates will focus on Luffy vs. Kaidou. Let’s meet when One Piece 1037 Spoilers are released.