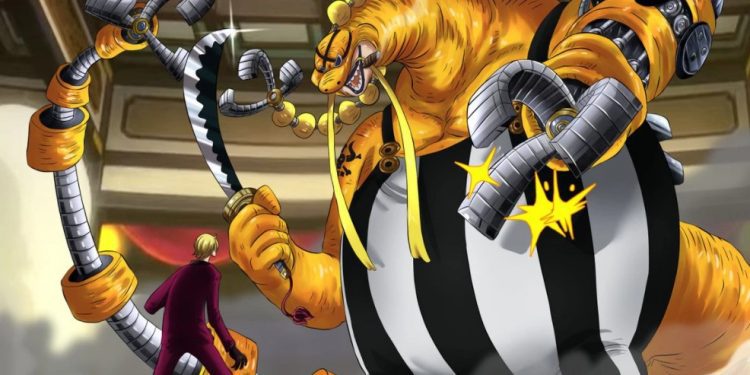 One Piece 1034 Spoilers has recently been released, pointing to the manga’s break this coming week. Sanji vs. Queen was cut due to the other battle in Onigashima before. The latest spoilers will be revealing Sanji and Queen as they have another intense battle after Sanji learns something about his powers and talks with Zoro. It has been a massive battle even though Sanji has to throw away his Raid Suit. In the previous spoilers of One Piece, we learn about Zoro’s past and the mysterious powers within the sword of Oden Enma.

During King vs. Zoro, King thought that he had won the battle after sending Zoro flying. We also saw Zoro losing his three Katanas, but he dives midair to retrieve them. Zoro also has some flashbacks and talks with his master when he learns about different swords. That made Zoro know that Enma had chosen him, and it tested him if he was worthy of wielding it like Oden. But King thought that a swordsman who lost his swords during the battle was a loser. The battle continues after Zoro grabs all three-sword and gets ready to face King.

In the last chapter, we also learn about a blacksmith, Shimotsuki Kouzaburou, and saw Zoro unleashing three-sword style. Note that One Piece will be taking a break and then returning with other updates after a week. Zoro vs. King will continue in the next chapter since the manga focuses on Sanji’s side. Luffy and the other battle will return to the scene later. Sanji vs. Queen begin at the end of the previous chapter. We will be looking at the summary of the battle below.

The chapter title is “Sanji vs. Queen,” a summary thanks to ”Redon” from AP forums. We will update spoilers soon since this is the summary. The chapter begins on Sanji’s side, where Queen was chasing him.

– Sanji appears to attack Geisha, who is known as “Osome.” She was searching for a mouse pet named “Chuji.”

– Momonosuke appeared holding the clouds created by Kaidou while pulling them.

– Queen shows mysterious abilities, and it is revealed that he possesses the powers of members of Germa 66 and can use their attacks, including Sanji’s invisibility.

– Geisha Osome arrives at the battlefield looking for Chuji.

-Queen uses his invisibility and attacks her.

– Sanji then combines a series of attacks and unleashes an attack called “Beef Burst.” It ends with Sanji attacking Queen.

Germa 66 is a family group run by Sanji’s father, Vinsmoke Judge. The group is also called the Warmongers operating as a military branch of the ”Germa Kingdom” and an ”Underworld” mercenary force. The Vinsmoke Family has become popular since Germa 66 is known for its powerful technology and weapons. But the only single member of the Vinsmoke family didn’t live up to their expectations. Sanji was the one who didn’t like those powers, but his father tried to force him to use them even though he loved cooking.

Vinsmoke Judge didn’t like raising a cook instead of a warrior and decided to cast Sanji out of his family since it would make him feel humiliated. In the first place, they wanted to ally with Big Mom Pirates, but things didn’t go well since Germa 66 became a nemesis of Big Mom’s Pirates after Sanji saved his family with the Straw Hats.

The Germa 66 realizes that Straw Hats are not evil pirates, and they allied with them. Despite that, Sanji didn’t throw his culture away and remained with the Raid Suit until he faced Queen in the current battle. The Germa 66 member possesses different powers from Sanji’s. Let’s meet when One Piece 1034 Spoilers are released.

Also Read: The King of Demon Tribe and Demon Queen Alliance Begins In Chapter 322 of My Wife Is A Demon Queen.