by Meshack Makungo
in One Piece
Reading Time: 4 mins read
0 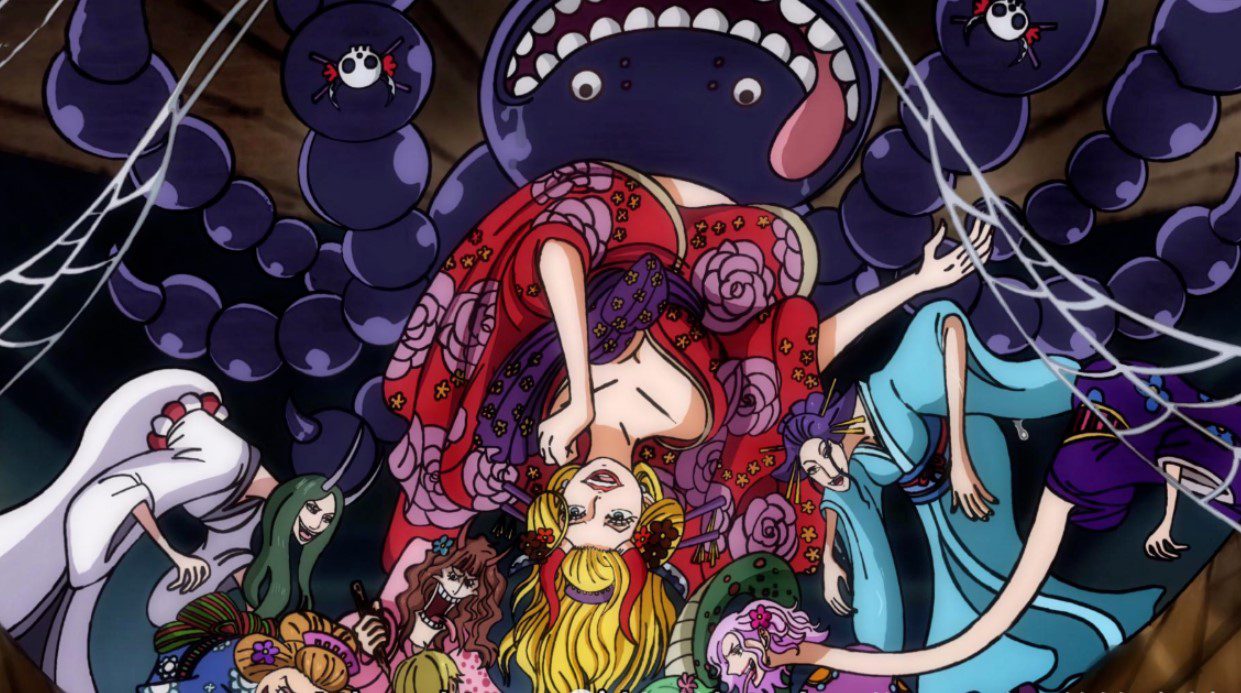 Black Maria and Her Minions

All facts finally come together in One Piece 1020 spoilers as the manga braces for Wano’s final moments. While the manga will be going on a break, the spoilers for the next chapter have already resurfaced, and we will be looking at them shortly. The recent chapters of the manga have been all about facts and revealing more information, especially when it comes to devil fruits and the Beast Pirates.

With only one of the Tobi Roppo, or rather the flying six left standing, the manga will conclude this month with the fate of the Tobi Roppo, so we will probably have an interesting start for August. The last chapter of the manga will release next week as we finally head to the end of the month that only saw two chapters releases. As a result, we got the least updates in a period of four weeks for the second time this year due to the ongoing  Olympics in Japan.

For the full manga schedule for the month, you can look at the One Piece Chapter Schedule for July 2021. for those who only follow official releases, it will be a while till you get the updates next weekend. So from here on, we are heading into spoilers territory, which includes early leaks of the upcoming manga chapters. Looking a the latest updates, we can tell that the manga is heading towards intense action where all of the Tobi Roppo fights finished but one.

One Piece Chapter 1020 will release next weekend after the manga’s Olympic break ends. You will be able to read One Piece Chapter 1020 online for free on Viz Media as they are the official provider for the manga. Major updates have surfaced, and everything looks interesting. And as most fans have expected, the chapter will also focus on the last member of the Tobi Roppo.

The Chapter will be titled “Robin Vs. Black Maria”

We managed to get the latest updates thanks to Redon of Arlong Park forums:

– Yamato is the user of the Inu-Inu no mi model “Oguchi no Makami.”

– Robin sees some illusions but attacks them; they turn out to be Black Maria’s subordinates.

The illusions Robin and Brook see are of people they miss. In Robin’s case, we see the back of a giant and a white-haired woman. But not their faces. In Brook’s case, it is many people from his past crew from the back and also unknown people wearing odd armor. No faces again. Brook cannot attack any of them, but Robin dispels the illusion by attacking her loved ones, which in return defeats Black Maria’s subordinates.

–  Wanyudo is a Special Dog-type SMILE fruit based on a dog breed you can only find in Wano.

– Black Maria laughs at Sanji for crying over her for help.

– Robin: “What it means for Sanji.” to depend on me is not something you should understand. He is a man who deserves to be called” The Wings of the Pirate King. ”

– Caribou is with Momonosuke and watches them from afar; later, they meet with Luffy.

– Luffy tells Momonosuke that he must transform into a dragon and bring him back to Onigashima.

Full Summary to Be Released Next Week.

Build Up to Luffy and Kaidou’s Final Showdown

With all of the possible obstacles almost cleared, we can now see Luffy vs. Kaidou once again on the horizon. It looks like Momonosuke will play a vital role in Kaidou’d defeat as he carries Luffy towards the rooftop where Yamato is. But we haven’t seen how Yamato and Kaidou’s fight is going, so that might take a while.

Another thing we are looking forward to is the scene of what happened when Luffy was knocked out of the Island by Kaidou that left him unconscious. So that will probably be the first flashback that Luffy will get once he stands against Kaidou.

One thing we can also look forward to is that this is likely the final showdown between Luffy and Kaidou, so we expect Kaido to finally take things seriously and try to kill Luffy for real this time.

On the other hand, Momonosuke taking Luffy to Kaidou means that he will be meeting Kaidou once again, so it will be interesting to see Kaidou talk to Momonosuke once again. Nonetheless, August will be an interesting month for One Piece manga, and the last chapter for this month will also carry a lot of interesting information.

Robin and Black Maria’s fight continues, and this time, we get to see the classic team-up between Robin and Brook. So we expect to see another exceptional teamwork between the two of them. Since the fight has just started to get serious in the upcoming chapter, if we follow the recent manga progress, it might end in another chapter then, we will be left with only the top fights.