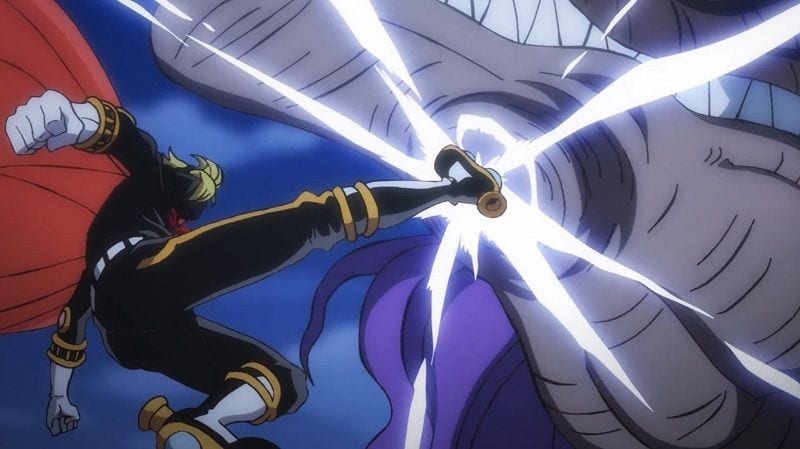 One Piece 1017 spoilers came out late this week as we have experienced a completely blank week after the manga went on a break. With the war at Onigashima going on, the early spoilers were released only a few days after the official release of the chapter. Right now, things have slowed down a bit after Luffy was knocked off the rooftop, and now we are getting updates from other fronts of the fights.

The early spoilers hint at other fights that we haven’t heard much from since the manga entered this arc. After all, it will be interesting to see what will happen next. Even though everyone knows that Luffy has been defeated, they continue to fight with full determination. The flying six also take things to the next level as the spoilers focus on their side once again.

In the recent chapters, we saw Sanji confronting Queen just when Chopper reached his rumble ball time limit. So next, we will see how Sanji tries to stop Queen while Big Mom continues with her rampages. It looks like we won’t get an update on the rooftop fight between Yamato and Kaidou. So in the meantime, we would see the full powers of the flying six first.

So we should note that we are yet to see all of their hybrid forms, so they should prove to be formidable opponents. One Piece 1017 will officially release on the weekend, marking the end of the manga break. The chapter will be available for free on VIZ Media and Manga Plus official websites for English releases.

The early spoilers have been translated thanks to Redon from Arlong Park forums. Let’s take a look at the latest spoiler updates:

The chapter will be titled “Order.” 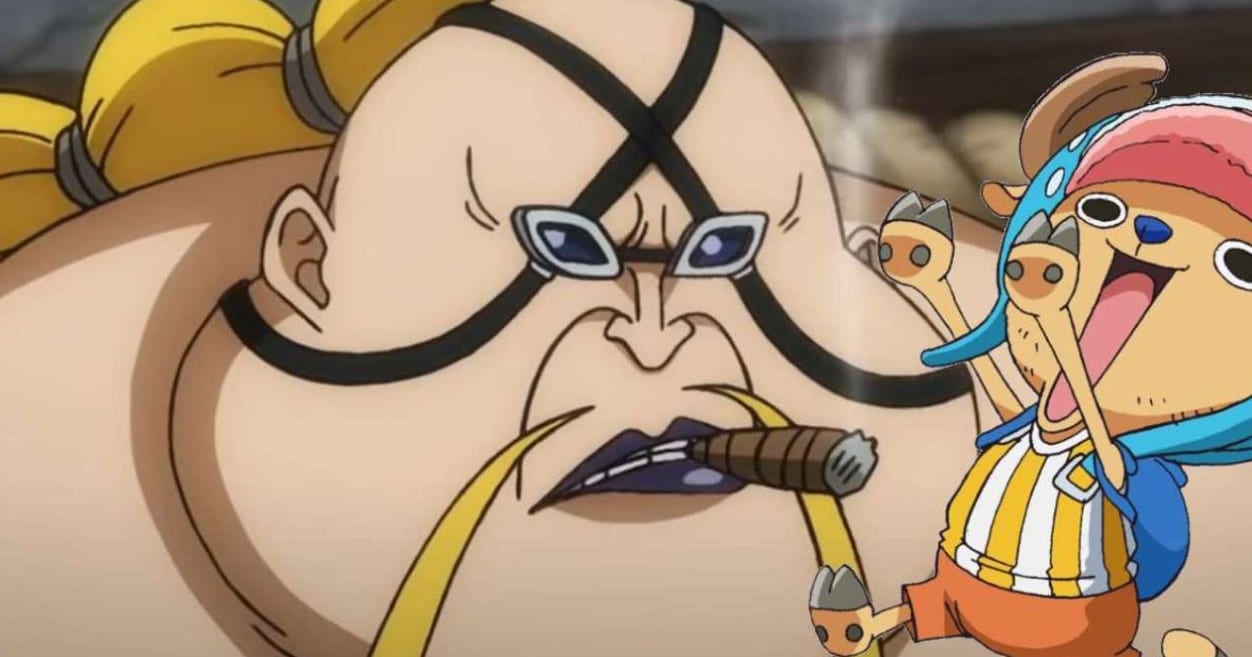 Korean spoilers also emphasized that it is the extent to which the mistake is associated with the world government.

To get more details on the subject of the devil fruit discussed towards the end, Redon recommends that you reread One Piece Chapter 1.

To get full details on when the next One Piece break will take place, you can read: One Piece Chapter Schedule for June/July 2021

On the cover, Buggy turns his body into a blocks puzzle and plays with a chimpanzee.
The chapter starts in the “Live Floor,” Tama is about to give an order. However, Queen shouts at her; she becomes so scared that she faints and falls over.

Cut to the 4th Floor. One of the catgirls from “Who’s Who” group shoots Jinbe while Who’s Who laughs at him aloud. Due to constant interruptions from Who’s Who subordinates, Jinbe cannot hold 1 Vs. 1 against Who’s Who. The same happens to Franky vs. Sasaki and Inuarashi with Jack; they cannot fight in conditions because other Kaidou’s subordinates constantly attack them.
Back in the “Live Floor,” Tama regains her sense while Nami and Usopp cheer her. Finally, Tama gathers enough strength to give an order to the Gifters.

Tama: “All Gifters who ate Kibidango… I command you to help Luffy-Aniki and Momonosuke-kun!! But, first, let’s bring down Kaidou!!!”
While Tama talks, the Heart Pirates saved Luffy, and they are pumping water out of him. On the other hand, Momonosuke cries for Kinemon and Kiku while in Shinobu’s arms.
After Tama’s order, the Gifters start to switch sides. Briscola, who was attacking the samurai, turned around and began to attack Kaidou’s subordinates, who accompanied him. We see more Gifters (like Hamlet) attacking his ex-teammates.

Tama’s order has reached all of Onigashima. We also see the Gifters who were with Jack also began to attack other Kaidou’s subordinates while Jack looks angry, and Inuarashi is relieved. The same thing happens on the 4th Floor; we see that Poker (the user of Rattlesnake SMILE) is attacking Who’s Who subordinates.
The CP0 is confused since they don’t know what is going on. The Gifters who went into the “Live Floor” to help Queen also switched sides.
Queen realized that this was Tama’s doing, so he prepared a beam to shoot at Tama. Nami and Usopp escape with her, while Sanji kicks

Queen’s head with his “Collier Strike,” Queen’s beam explode in his mouth.
Queen: “Damn, it’s “Judge’s son”!!”
Sanji to Queen: “Never call me that again!! Are you a part of that crazy research team?”
Queen: “Are you talking about “MADS”!? That’s all in the past!!”
While he speaks, Queen transformed into his hybrid form. His body is about the same size as his human size. However, he has a long neck and still has his robotic tail (it now has a 3-hook “claw” on the tip). His right arm has the human form (he has a sword in his hand), and his robotic arm’s hand has another 3-hook “claw” like the one at the tip of his tail.

Cut to Chopper and Zoro. Due to the new Rumble Ball’s effects, Chopper has been dwarfed. He now has the size of a baby (in fact, Tristan is holding him in the palm of her hands), and the samurai helmet he was wearing almost covers his entire body lol; however, that is not the only side effect. Despite the fact that he now has a toddler’s body, and He talks like an old man. This new form is officially called “Babyjiji Chopper” (Old man baby Chopper).
Miyagi, the goat mink doctor, revealed that there’s a super recovery medicine used in Zou. It can heal Zoro’s body for a period of time, but after its effect wears off, the pain will double.

Zoro: “There’s no time to think about it now. Just give that drug to me!!”
Cut again to the 4th Floor; Jinbe finally is fighting Who’s Who 1 on 1. Who’s Who draws his katana (that actually is a dagger) and uses it to attack Jinbe with “Hagan” (Knife Gun) that is like CP9’s Shigan but uses a knife instead of a finger. Jinbe counters with “Gyojin Karate: Karakusa Gawara Sei Ken”.
Who’s Who uses avoids Jinbe’s attack with “Soru” and uses “Rankyaku,” Jinbe blocks with armament Haki. He recognizes that Who’s Who is using “Rokushiki,” a combat style that the World Government rain its fighter through. While Jinbe talks, Who’s Who transforms to his hybrid form.

Jinbe: “I remember now. Sometime in the past, I heard a rumor that a CP9 member broke out of prison. I thought it was strange that the Government agent was arrested.”
Who’s Who: “Hahaha! So you know it! Yeah, that’s me!! I once saw you, though you didn’t know me!!”
Who’s Who was once one of the strongest CP9 agents, rivaling the genius Rob Lucci. And 12 years ago, due to one “failure,” he was imprisoned. Who’s Who attacks Jinbe with “Gagan” (Fang Gun) using his teeth to send the shockwave, Jinbe dodges it.

Jinbe: “I pity you for that. But it seems there’s no grudge between us then!!”
Who’s Who agrees, but Jinbe proudly declared himself as a Straw Hat Pirate, and hearing that name annoys Who’s Who.
Who’s Who: “12 years ago, a devil fruit under the Government’s protection was robbed in transit. 2 years ago, when Straw Hat Luffy started to emerge, I was shocked… Because he appeared to have eaten the “Gomu Gomu no Mi” that was taken from us that time!!!”

For June, the manga entered an interesting part where we saw Luffy finally confronting Kaidou, and things just ended up as they did last time. But we got to see interesting events unfold, such as the usage of Hashoku, which has not been fully explored in detail at the moment.

We know that a month in One Piece manga is about 3 chapters if we count Oda’s break that comes once every three chapters. In the worst possible case, we get Oda’s break together with WSJ or other related breaks in the same month; then, we will only get two chapters for that month.

Well, at least things were not as bad for June, so we got three chapters and managed to receive more developments from the manga and the storyline in general. In June, we saw the peak of the worst generation’s encounter with the two Yonkou’s and the outcome thereof. Luffy was defeated, and Kaido was left as a free-roaming monster.

On the other hand, Big Mom went on a rampage and wreaked havoc, which works in the Samurai’s favor. Now One Piece 1017 will be the last chapter of the month and will set the pace for July’s manga chapters and what we should expect. So far, it looks like July will concentrate more on the flying six.

Who’s Who was teased as strong since the start. However, the revelations that have come about him make him even more significant for this arc. We know that Gomu Gomu No Mi made it to Shanks eventually, and Luffy accidentally ate it. Who’s Who may know about the previous owner of this fruit. He may also tell us about the significance of this fruit to the World Government.