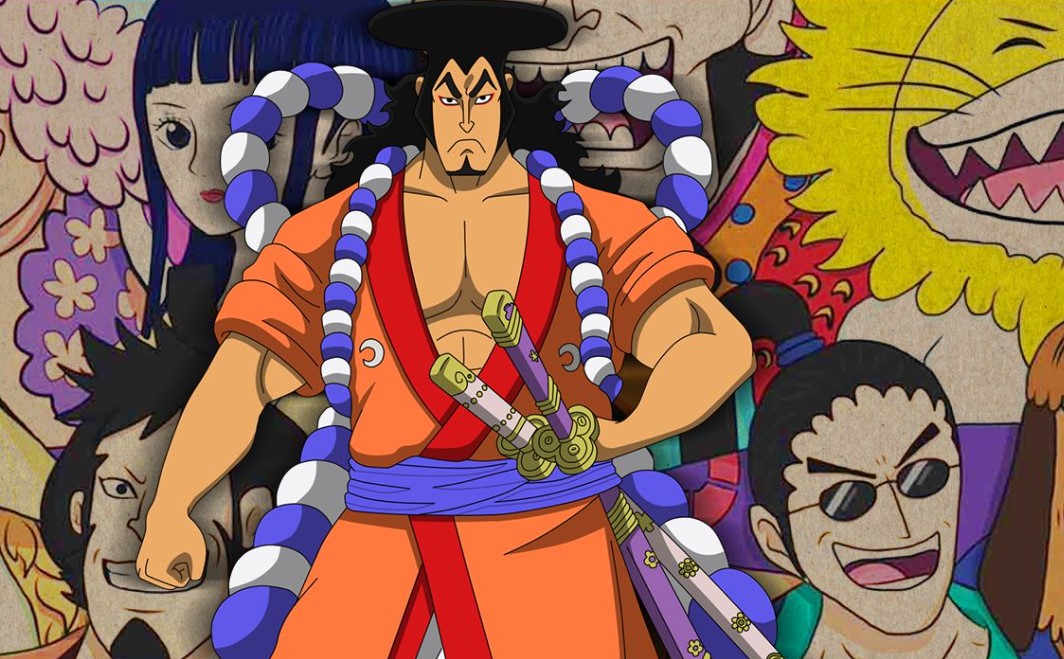 We are heading to the weekly break of One Piece; it will be returning on the date below. Today’s chapter is titled ”Tanuki-san.” The chapter started with Ceasar giving gas balloons to the penguins. On the live floor, Hyogoro had defeated the Oniwabanshu and Mimawarigumi members. Hyogoro manages to control the power of Koorioni.

After witnessing Hyogoro’s powers, X-Drake comments that he now gets why Wanokuni was feared all over the world. At the same time, Hyogoro and Oomasa are about to transform into Oni, but Yatappe and other Yakuza are ready to slash their heads. But they keep on shedding tears, waiting for miracles to happen. Kaido’s underlings are asking for Queen to help them. Queen is annoyed by their talks and jumps from the top.

Queen mentions Pleasures have become useless that they can only laugh at, and Waiters are now useless because there is no more SMILE. He reveals his masterpiece Kooroini that is made to enhance them. After they become a strong Oni, they will be of use to the Beast Pirates. He also said that soldiers can always be replaced and expendable. Queen tease the Samurai. He told them that protecting Chopper is a waste of time since Chopper is a pirate just like him.

Queen reveals that Chopper can betray them anytime and run away with antibodies. The pirate’s motto is to betray one another at the end. Yazuka behind Hyogoro, Yatappe wanted to kill Hyogoro since earlier Hyogoro has begged him to kill him. Chopper interferes by jumping in and blocks the sword before Hyogoro’s head is cut. He gave Hyogoro the antibody. The two Minks that helped Chopper, Miya, and Tristan came with a cannon. 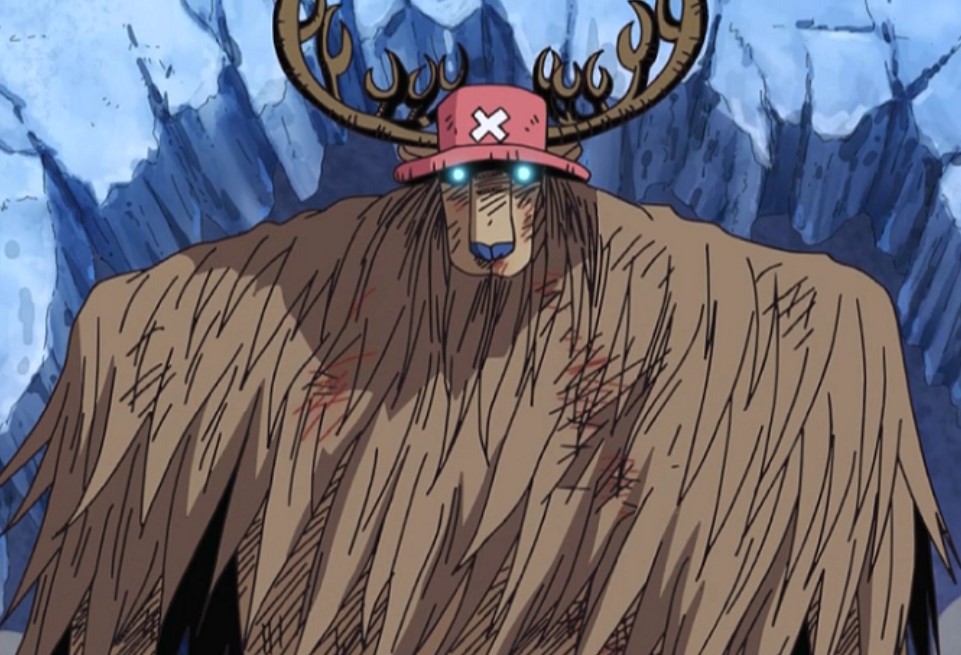 They blast it in the middle of the room, and after the explosion, a huge mushroom cloud with Chopper’s face appears. Chopper reveals if he creat an antidote in time, he will be able to distribute it and stop Queen’s Koorioni. He created an antibody and made a new type of virus, and everyone who inhales the breath will be cured. Queen is angry that his plans will be ruined. He wonders why a lowly Straw Hat crew has an experienced doctor with such qualities.

Chopper told Queen that the Straw Hat crew has been traveling the world and professionally trained. He reveals that the user of the virus using it as a weapon will never be able to control it. Queen asks why Tanuki is lecturing him. He started shooting Chopper, and the Pleasures block the attacks. Kaido’s allies want to quit Kaido’s crew. They want to fight alongside the Straw Hats crew and protect Chopper.

Marco praises Chopper for his work and heads toward Queen. He grabs Queen’s head and orders Chopper what he should do. Chopper swallows a Rumble Ball and transforms into his Monster form. He landed a massive slap that made Queen bleed from his mouth. Chopper reminds Queen that he is not a Tanuki, and Marco, X Drake, the Yakuza, Hyogoro, and Kaidou’s allies feel sorry for Queen. They saw that it was a massive blow that he has received.

Yamato is stunned by Momonosuke’s appearance. While at the CP0 room, the head of the CP0 reveals about the Marine ad Kaido. He said that Kaido was capture by the Marines in the past. Vegapunk remove samples of his lineage factor and used them to make a human-made Akuma no Mi.

The World Government approaches Vegapunk to give it to them, but Vegapunk told them the experiment was a failure. Vegapunk kept the experiment at Punk Hazard. One of the CP0’s asks why the leader is telling them this now. The leader continues with his story. He reveals that an explosion destroyed Punk Hazard, and the Akuma no Mi has also exploded. 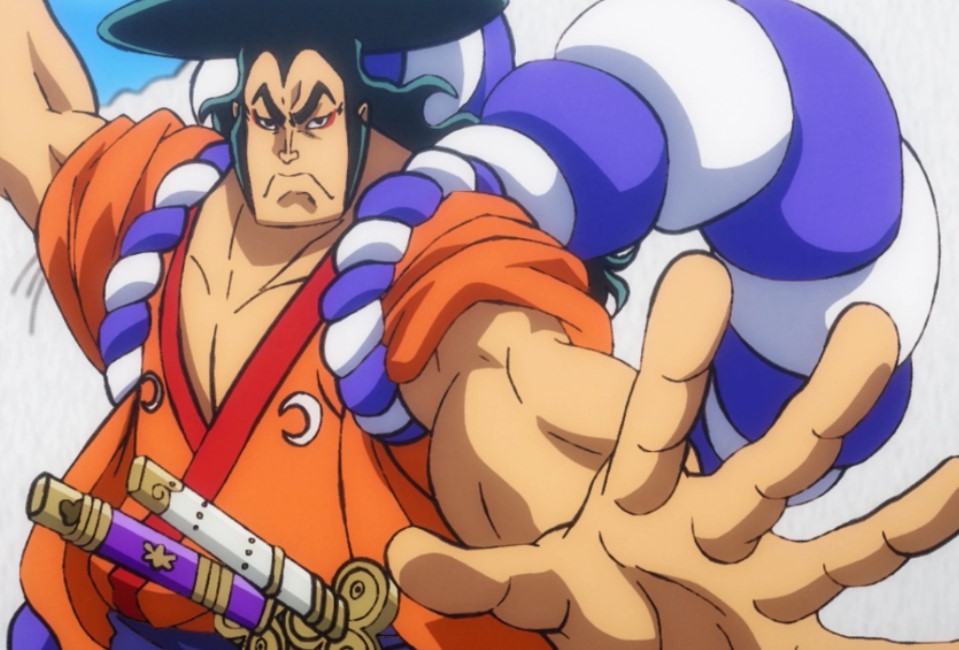 But G5 reports reveal that there is a facility working after the explosion. It means there is a chance that the Fruit has survived, but the Fruit is also a failed experiment. They have all regained consciousness at the Red Scabbards’ room, and they are surprised who cures their wounds. Kawamatsu thinks that he saw someone, but he thinks he was just dreaming. He thinks it is impossible for that person to show up.

He has two Katana but it is not Enma and Ame no Habakiri. Oden teases them that they have gotten old and he missed them so much. The Red Scabbards are stunned and shout Oden-Sama. Read One Piece on Viz Media and MangaPlus.