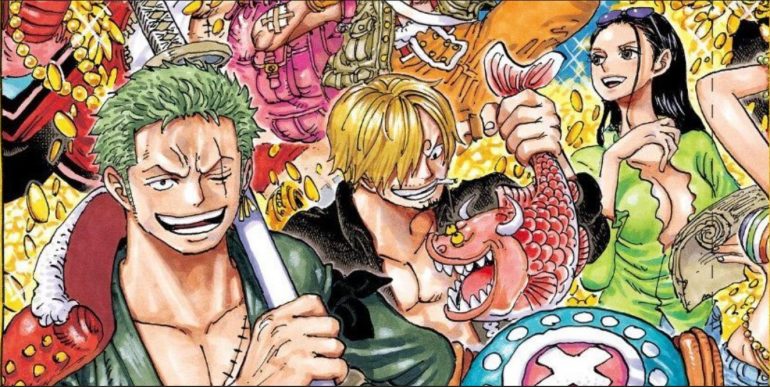 With the release of One Piece 1000 almost here the full spoilers for the chapter have been already released. One Piece 1001 will be filled with more updates on the final confrontation between Kaido and the supernovas. And now most One Piece manga fans are looking forward to what will happen next. The latest spoilers have revealed Kaido to have been relaxed. With big mom seating on the side, it appeared that all the scabbards did was to fight the All-Stars and now they have taken each other out. Kaido had his time enjoying torturing them but didn’t go as far as killing them as he patiently waits for the supernovas to show up.

The end of One Piece 1000 hinted about the beginning of what will be the greatest fight so far. And also gave us a glimpse of Luffy’s new application of Ryou in his third gear attacks. This was powerful enough to knock Kaido to the ground and Big Mom expressed disappointment. Asking Kaido how can he let such an attack hit him and that was a much as we have had for the manga’s 1oooth chapter.

This leaves us looking forward to what will be coming next. Hopefully, it will be more updates on this fight. But we all know that this will be the last fight to be shown so things might develop a little on this fight then move to other places where we will occasionally visit that big fight up until everything else is wrapped up. Let’s take a look at more updates on the developments and when One Piece chapter 1001 spoilers might be released.

One Piece 1001 Spoilers will be released on 11 January 2020. Let’s break this down to how the manga leaks have been releasing so far. Usually, we get the earliest spoilers for upcoming chapters on Monday before the chapter is released at the earliest. So if it’s late it goes up to Wednesday and by Friday the full spoilers for the chapters are out. Then we will be left only with the official release of the manga chapter for the weekend that follows. Lately, the spoilers have been releasing early. One Piece chapter 1001 will be released on Sunday the 17th so by Monday the 11th we will be getting the earliest spoilers for the chapter. Here as some highlights and possible areas where One Piece 1000 will be released.

For those who strictly follow official releases, it’s best to steer away from what’s coming next as we are full about to bring spoilers. Let me not even mention those for One Piece anime as it is way behind. But if you are delving into spoilers and manga territory for the first time then you are more than welcome to see what the battle that will decide Wano‘s future looks like.

We have seen the straw hats make their way to the top floor and even though we had no idea who will make it first. Things have turned out to be a little different. The manga keeps on bringing unpredictable situations. Just like when Kadio moved the entire Onigashima island airborne. And now he will be fighting the four supernovas en-route. Kid, Killer, Zoro, and Law now stand before the two Yonko’s and a big battle is about to start.

If you are a true One Piece fan you would know that now this is a sight not missed. Even just the appearance of a still picture of it on the manga is sure to be very exciting. We have already seen amazing cuts from the manga so far. You would even remember the sight when the scabbards attacked Kaidou and officially started the Onigashima raid. So far we have had a lot of them to look forward to and we cant wait to see how their animation will look like.

One Piece 1000 will have a color spread that will even be interesting just like in the same manner that One Piece 999 had. Now take a look at more developments on the raid. And how it might go on in the upcoming chapters. Probably on the upcoming spoilers since they are the ones we are eagerly waiting for now. The spoilers for the upcoming chapter have shown Luffy arriving at the rooftop and finding the scabbards beaten up. Marco finally managed to deliver Zoro as well.

A concerned Luffy passes Big Mom and Kaido who are talking to him and goes to pay his respects to Kinemon for holding out this long. He apologizes for being late but Kinemon told him that this is as far as they helped him. Kaido’s remarks make the entire scene so interesting. And knowing Luffy he still attended to what mattered at the moment looking cool.

Kaido asks Luffy to say it again in front of his face. After telling Big Mom that Luffy has said something ridiculous to him when he kept saying he will be the Pirate King. As Luffy tends to Kinemon, he asked Law to help move the scabbards to safety with his room. Just as Kaido is about to attack him he jumps and lands a clean blow on Kaido’s face with his gear third combined with his mastered Ryou training. This seemed to be enough to knock Kaido to the ground.

Now that Luffy has mastered both advanced applications of Haki, he has a good edge towards Kaido. We all know that Rayleigh trained him and he developed his gear fourth specifically to fight bigger beasts. Big Mom and Kaido could also be considered as one. Because of their unusually large bodies. Kaido was even referred to as the strongest creature alive. So Luffy’s gear fouth is well suited for this. We also do not know the extent of other supernovas powers but over the past years that they have not been making an appearance, they have gotten stronger and we will see it in this fight.

Now that everything is set in motion, we are likely to get only a glimpse of the beginning of this fight, and then the story will switch to other smaller fights. Otherwise, it wouldn’t be as interesting for Kaido and Big Mom to be defeated first. So in the upcoming chapters, we might get little development on this fight. Then more on smaller fights that have developed in the lower floors. We are yet to get more updates on people like Jinbe and Marco, Franky, and other Samurai fighting the beast pirates around various floors.

Robin is likely to be on the search for the Poneglyph together with Brook as so far she has not appeared and seemed to have wandered deep within the castle. Kaido has already confirmed that he has the Poneglypth with him. And obviously, it has got to be somewhere in Onigashima. But now that Kaido will be occupied with the supernovas. There won’t be anyone else to guard wherever the Poneglyph might be kept. it might be a while and since the fight had just started there is still a long way to go. So now it would be best to enjoy chapter by chapter and see how things will develop

One Piece manga is officially available online on the VIZ Media and Manga Plus official websites. The websites are also releasing previous chapters for free in celebration of the 1000th chapter each week. On top of that, free users can read up to three of the manga latest chapters. So if you need anything more than that you will have to opt for a paid subscription. So always make sure you use these official sites to read One Piec manga in support of its creators.