Kim Hyun Soo has opened the door to a whole new world of devilish people. How will he survive among the beast who only knows the language of fists? 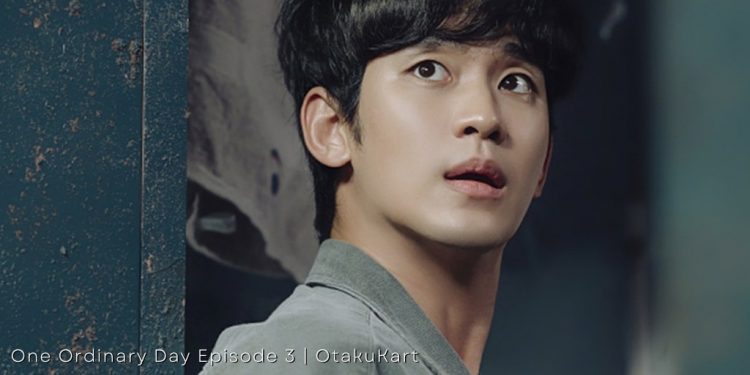 One Ordinary Day Episode 3 is releasing this weekend, uncovering Kim Hyun Soo’s hellish prison life! With the final decision passes in the hearing for the warrant validation, Kim Hyun Soo’s life has turned into a complete mess. Firstly, all evidence, all witnesses are against Hyun Soo’s favor. There is no proof to clean his name for now. Therefore, it is obvious the judge will give an order against him and pass a warrant taking this case to its next level. However, amid this mess of murder mystery, will Shin Joong Han find a way to pull Hyun Soo out? Or will Hyun Soo have to pay the price for the crime he did not even commit?

The latest episode reveals how Captain Park Sang Beom gathers all the witnesses one by one and takes their statements, which are, of course, against Kim Hyun Soo. Both neighbors, Yoo Seung Hun and Ha No Seok, and the police officers, state all the facts they saw without adding any spices. It is not their fault. From the outside perspective, it clearly appears that Kim Hyun Soo is the murderer but what they have seen is little pieces of the whole picture. Therefore, One Ordinary Day Episode 3 will show new parts of this puzzle, which will help us and Shin Joong Han complete this murder mystery!

As we mentioned, Captain Park gets all witnesses’ statements, turning them against Hyun Soo. He even searches the crime scene, finding Hyun Soo’s inhaler, which he later gives him back. As per the chief’s order, Captain Park tries to get Hyun Soo’s confession which does not happen. Thus, he transfers the case to the prosecutor, which leads to the hearing for Hyun Soo’s warrant validation. During the hearing, the prosecutor presents 117 pieces of evidence against Hyun Soo yet, he denies his crime. Therefore, the judge studies the report to decide whether to detain him or not.

Kim Soo Hyun does not simply act, he gives life and soul to his characters. When you watch OOD, you don’t see KSH acting but you see Hyunsoo himself – a man who is realizing that he is powerless against injustice#OneOrdinaryDay #OneOrdinaryDayEp2

Hyun Soo’s parents’ hopes begin to collapse after seeing his only son in such a miserable condition. The police even seize their home, making things difficult for his family. Eventually, the judge passes a warrant against him, changing Hyun Soo’s life in the worst possible way. By the ending, Hyun Soo is transferred to a prison, which will be an entirely new world or maybe more like a whole new hell! Thus, One Ordinary Day Episode 3 will write Hyun Soo’s hellish prison history!

One Ordinary Day Episode 3 will be released on 4 December 2021 at midnight KST on Coupang Play. With the first two episodes uncovering Kim Hyun Soo’s side of the story, the upcoming episode will reveal the other characters’ tales of mystery. It may link to Hong Guk Hwa’s murder case. Shin Joong Han has also begun to lay his cards to fight this ‘almost 0% winning’ case. It makes us wonder why he takes Kim Hyun Soo’s case when from an outsider’s perspective, all the pieces of evidence are clearly direct to him.

In Whose Favor The First Hearing End?

Since things are not working for Hyun Soo, the upcoming episodes will be tough for him. He will experience his first hellish jail life. All the teasers have already revealed how dangerous and painful this journey will be for him. During this ride, he will meet many people, some may help him, and some may stand against him. Only time will reveal who is a friend and who is a foe. However, fans should look forward to Kim Soo Hyun’s brilliant performance as an accuser in Episode 3.

Another thrilling part we should be expecting in One Ordinary Episode 3 is the first hearing. High chances, the first hearing may not end up in Hyun Soo’s favor. Because turning the table at the beginning, when all evidence points to him, will not be an easy thing. Plus, they have found no leads. So far, there is no progress on that section. The upcoming episode will also welcome some new pivotal characters, which we all have been looking for. So stay tuned with One Ordianray kdrama to find out how Shin Joong Han helps Hyun Soo with his devilish mind!

The kdrama ‘One Ordinary Day’ streams on Coupang Play at midnight, available only in South Korea. The kdrama will release at 2 am in Australia on the same day but will be available on 4 December at 9.30 pm in India, at 10 am in the US, and at 3 pm in the Uk. As for international viewers, the drama is available on ViuTV. But keep note that ViuTV runs only in selected countries for now.