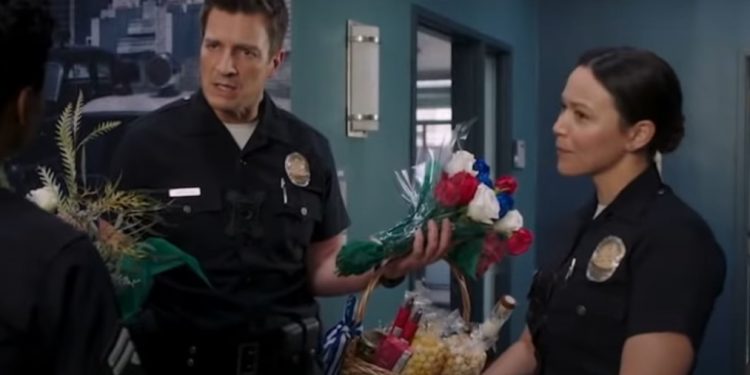 On The Rookie Season 4 Episode 12, we will see Nolan and Bailey catch some bad guys as usual. We will also see some police station comedic gags, like a basket of goodies and some flowers, because who says LA cops can’t have a soft side? Also, The Rookie is a procedural crime drama created by Nathan Fillion and produced by Alexi Hawley, if you’re not familiar with it. It tells the story of a forty-year-old police officer in the Los Angeles Police Department, who, despite his age, finds himself in danger due to his work as a new officer.

In the last episode, several shockers came about for Nolan as he learned about Bailey’s marriage, and that drew quite the gap in their relationship. Why? Because he was going to propose. What a heartbreak! The show is now in its fourth season and is full of exciting plot twists and stories. Let’s get started on this topic here at Otakukart without further ado.

Nolan and Bailey meet with Wesley about her ex-boyfriend Jason Wyler and how he framed her in the Rookie episode. Wesley tells her she can take a plea deal, but the department discourages officers from socializing with convicted criminals. Nolan assures her that they have to do now to prove her innocence and bring Jason down. Following that, Nolan and Grey are with Officer Grey, who has to leave due to a homicide investigation.

Chen is looking into Tyler, the thief who robbed the liqueur store – thankfully, the owner is unharmed. Chen arrives at the station and requests that Sanford charges Tyler as a minor because he was 16 and the gun was unloaded; moreover, the store owner is fine. Sanford says he’ll do something if Tyler can be a confidential informant against his crew, but otherwise, no.

Harper meets Thorsen’s mother at the station and tells him to be nice to her. His mom wants him to be a part of a reality television show, but he refuses. Nolan and Bailey are interviewing her current husband, who is an ex-con. Later on, Nolan receives a call from Randy, who claims that Jason listed an address for his residence but never showed up, possibly violating his parole.

Nolan takes Bailey to see Oscar in prison and tells him that he needs his help to get inside Jason’s head so he can figure out what he’ll do next. Bailey claims they were married for a year, that he abused her psychologically, and has now framed her. Oscar claims they need to humiliate him to throw him off his game. He most likely obtained the drugs from a prison acquaintance. Oscar believes Jason is playing the long game; he’s probably done this to a dozen other women before Bailey.

Chen is summoned to the scene of a murder, the victim’s name being Becca Price. Lopez shows Chen a photo on Becca’s phone of Chen’s roommate, who she knew. Chen has returned home, and she has brought Bradford with her. She enters her room and informs her roommate that her friend Becca has died. Because she’s been so busy and moving in, Tamara claims she hasn’t spoken to Becca in months. When Thorsen and Harper are on patrol, they see a man robbing a store and pursuing him, but Harper falls and cuts her arm. Next, Chen investigates Becca’s social media and discovers that she regularly hooks up with four different guys on TikTok.

Harper is in an emergency situation because her lab results revealed six weeks pregnant. She tells him to leave, saying she’s tired of his lies. He tries to take the laptop, but she refuses, claiming that she paid for everything. Harper tells Thorsen that she’s pregnant and can’t stop thinking about it – she’d been told she couldn’t get pregnant, and she’s only been with James for a few months, so they never expected this.

Lopez meets a man named Martin at the station and inquires if he knows Becca, to which he responds that they are friends. He informs her that Becca is homeless, mentally ill, and likely addicted to drugs. He admits that Becca was there last night, looking for a place to sleep and shower, but his girlfriend was on her way home, so he gave her $20 and sent her away. Martin claims that Becca took his expensive watch. In other news, the cops broke into Jason’s computer and discovered a money-laundering scheme, which they will be able to track if he tries to move any money.

Thorsen interrupts Harper’s announcement that she is pregnant, saying that his mother sent a 911 text and is not answering her phone. When Chen and Bradford arrive, Tamara sees some of her and Becca’s mutual friends under a bridge. Chen informs Tamara of the stolen watch and inquires Becca about what she would do with it. Becca tells them about a pawn shop she and her friends frequent.

Nolan calls Oscar and informs him that Jason was involved in money laundering. Because he’s up against the wall, Oscar believes Jason will turn himself in and try to negotiate a sweet deal. When Harper and Thorsen arrive at his mother’s office, she arranges to meet the man for the reality show, which irritates Harper. Jason confesses to all of his crimes in the station and is given an eight-month sentence in exchange for giving up an evil organization with which he was involved. Grey warns him that the deal will be called off if he tries to pull any stunts.

Chen and Bradford visit a pawn shop to inquire about the missing watch. He still has the watch, and the serial number matches the one he bought from Tamara’s friend Declan. Chen is concerned about Tamara’s safety. Meanwhile, Declan is still with Tamara, telling her that he went to take Becca’s watch while she was sleeping, she awoke, and it was an accident because he pushed her, and she hit her head.

Jason needs to set up the people he works for, so Grey and Nolan are on a stakeout with him. Grey tells Nolan he doesn’t have to be here, but Nolan insists. Meanwhile, Harper and Thorsen are staking out the area and providing backup if something goes wrong. Finally, Oscar calls Nolan and informs him that Jason has a side job with the southern front, the same group to kill him.

Oscar has a solution; he informed the southern front that Jason was cooperating with the cops, and the hit was transferred from Oscar to Jason. Jason is on the verge of being shot, but the team reacts quickly and takes command. Jason grabs the money bag and flees while Nolan chases after him. After that, Jason throws down the money and raises his fists in the air to fight Nolan, who punches him, knocks him down, and handcuffs him.

Sanford tells Chen to persuade his boss to cut Tyler a good deal. He tells her to take it easy on him. They’re both working toward the same goal from different perspectives. She expresses gratitude to him. Tamara expresses her gratitude to Chen for everything, including her assistance, the bed she sleeps in, and the justice she obtained for Becca. James apologizes to Harper and kneels in front of her, begging her forgiveness. They’re going to be a kickass team, he says. Bailey and Nolan sit down and relax with a glass of wine and finally get to exhale, Jason will be in prison for eight years, and when he gets out, they will get a restraining order.

Where to Watch The Rookie?

Simply turn on ABC networks at the appropriate time to watch “The Rookie.” You can also watch this show on the ABC website or through the ABC app. DirecTV, Fubo TV, YouTube TV, and Xfinity may also be able to stream the show live. You can also watch the fourth season on Hulu if you have a subscription. Finally, Amazon Prime Video, Vudu, Microsoft Store, Spectrum, iTunes, and Google Play all have video-on-demand streaming options for the show.

The Rookie Season 4 Episode 12 will release on January 23, 2022, on ABC at 22:00 hrs, Eastern Time, United States. The episode’s title will be “The Knock,” and the script was written by Alexi Hawley and Zoe Cheng. Secondly. The show drops new episodes on Sundays, as every episode has around 45 minutes of run time. With this, we conclude our coverage of the Rookie here at Otakukart. Thanks for reading our scoop, and please keep coming back to our website to stay on the loop of all your favorite series, movies, and shows.