After finding out that Gwang Nam is Ha Ru's father, Ok Hee loses her calm and wrecks her husbands office. She tells him to go to his first love as she cannot live with him anymore. 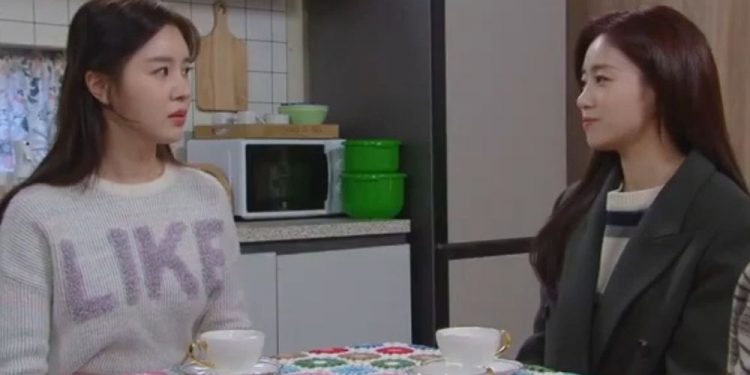 Ok Hee discovers DNA test results outside Hee Ok’s house. As she already has doubt about who Ha Ru’s father is, she opens the envelop. This makes her burst into flames as in the result, it is mentioned that Gwang Nam is Ha Ru’s father. First, she wrecks Hee Ok’s place and then Gwang Nam’s office. In ‘Love Twsit’ episode 24, Ok Hee asks Gwang Nam for a divorce.

A happy celebration is going on at Kyung Joon’s house as Do Hee accepts his proposal. His family is greedy and is only happy because they think she is from a rich family. Later, Ok Hee calls Kyung Joon urgently to take her to Ha Ru. She tells him the truth about his father and forcefully separates Ha Ru and So Ri. What will happen when So Ri finds out the truth?

Till now, we have seen that Gwang Nam breaks up with Hee Ok. When Park Ki Tae appears back in their lives situation becomes complicated. As Park Ki Tae forces Hee Ok to accept that Ha Ru is his son, she lies, saying that Gwang Nam is the father, not him. This raises another problem as Ki Tae is firm on a DNA test. To satisfy his suspicion, Hee Ok makes fake proof. Even after seeing this, he is not convinced and tells Ok Hee about Hee Ok’s claim. When she asks about it, Gwang Nam refuses the allegation. Still, Ok Hee visits Hee Ok the next day.

She finds DNA test results outside Hee Ok’s house and is confused. She resists Hee Ok and opens the envelope. She finds out that Gwang Nam is Ha Ru’s son. Ok Hee loses her cool and breaks everything at Hee Ok’s house. However, she does not know that the test results are fake, and Hee Ok does not clarify this with her. Later, Ok Hee goes to her husband’s office and throws a tantrum. Finally, she tells him to go to his first love and forget about his family.

Yoon Ah Refuses To Be A Witness

So Ri asks Yoon Ah to be a witness at her wedding as she is the closest friend she has. However, she thinks that this is an absurd idea and refuses. It is Chul Gul’s idea to make Yoon Ah a witness, but he has another motive behind it. After their one-night stand, Chul Gul develops feeling for Yoon Ah, but she is still in love with Ha Ru. So when Chul Gul confesses his feelings, she puts him down coldly. As So Ri leaves to get something to eat, she texts her mother and tells her to take care of herself and eat on time. This makes both of them very emotional.

After reading the text, Ok Hee realizes that she cannot let So Ri marry Ha Ru. This is because she thinks that Gwang Nam is both So Ri and Ha Ru’s father. She calls Kyung Joon and asks him to drive her. She visits Ha Ru late at night and tells him the truth about his father. This makes everyone’s life even more complicated. Also, Ok Hee has no other choice left other than to drag So Ri back home.

The ‘Love Twist’ episode 24 will be released on 13th January 2021. In the upcoming episode, Do-Hee says yes to Kyung Joon’s proposal. This makes his parents very happy as they think she is from a rich family. Other than this, Ok Hee tells Ha Ru that Gwang Nam is his father, and this makes him confront Hee Ok. They have an upsetting conversation in which Hee Ok confesses that she never wanted to give birth to Ha Ru. Finally, So Ri and Ha Ru’s families forcefully separate them from each other.

Where To Watch ‘Love Twist’ Episode 24?