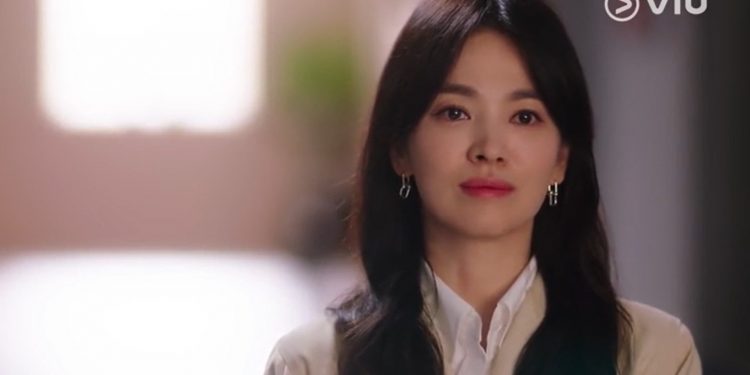 With episode 9 of “Now We’re Breaking Up” releasing this weekend, the show has just marked its half story. Things have been hard for Young Eun as usual. But she has been doing everything she could and managing just fine. Getting into a relationship with Jae Guk hasn’t been easy for her. It hasn’t even been a week, and she has received a call and text from her dead lover. His family is also after her. Young Eun also had to save her brand from shutting down. Now taking over the responsibility of her Mi-Sook, Young Eun will have to spend all her time multitasking. But at least Jae Guk is beside her.

Because of a drunk mistake of Chi Sook, CEO Hwang knows about Jae Guk and Young Eun. Ignoring everything she has done for the company, he wishes for her downfall. Arriving home drunk after a date night with Do Hoon, Chi Sook told her father that Jae Guk was in love with her best friend. Meeting over lunch, as she tried to tell him that she couldn’t do anything, CEO Hwang just called her pathetic for letting Young Eun steal him. While Chi Sook’s awkward relationship with Do Hoon has been turning into something else. While it seems as if she’s still not over Jae Guk.

The unknown war between Shin Yoo Jung and Young Eun has already begun. After calling and texting Young Eun from Yoo Wan’s phone, Yoo Jung went on to invite her over, ordering their recent collection. Talking about Jae Kook, Yoo Jung told her that she knows about their relationship. She went on to tell her about his older brother Soo Wan and how he died in a car accident. Blaming the rain but emphasizing the fact that he was on his way to meet someone. As Young Eung asked her why was she bringing him up, unaware of the fact Soo Wan was Yoo Jung’s fiance. Yoo Jung just asked her if her relationship with Jae Kook is appropriate.

Spending the night with Young Eun, as she told Jae Guk that she got a call from Soo Wan. It didn’t bother her as she didn’t even remember that she still had his number. Jae Guk knew who was behind the problem. Meeting Yoo Jung, as he asked her why would she meddle with Young Eun, she brought his mother in. Sick of hearing the same excuse, he called his mother, telling her that he is dating Ha Young Eun and would like them to meet soon. As his mother heard that it’s the same Ha Young Eun whom Soo Wan talked about last year. She couldn’t believe her ears.

Soo Wan Wasn’t An Angel Though

While everybody has been sad about Soo Wan dying in a car crash on his way to meet Young Eun. He isn’t an angel, as it turned out that he was cheating on Yoo Jung with Young Eun back in Paris. Calling him to the inventory, as Young Eun asked Jae Guk about Yoo Jung as she asked her if they’ll keep dating. She got to know that she was Soo Wan’s fiance. Shocked that he two-timed her back in Paris, she cursed him out. While Jae Guk just agreed with her and told her that she was young and in love.

Asking him one more time if he’s going to be okay with the relationship. Jae Guk told her that it is going to be about just them and everything is going to be alright. Arriving home after work, he told her that he’ll be coming over. But as Mi Sook came over, they’ll have to cancel their plan. While staying back home, Jae Guk talked at home about their days, he asked Do Hoon to interpret her reaction. Thinking if she was upset as she didn’t throw a fit. Arriving at her door late at night, he left her a fruit basket and some wine. Standing down her window, he told her to enjoy with her friend.

Also Read: Rainless Love In A Godless Land Episode 9: Behind Every Lie Is A Wish Waiting To Come True

Mi-Sook, still suffering from pain, got a call from her mother-in-law, who just complained about her son being the bread wiener of the company. She went on to close all her bank accounts, taking all the money out. As her husband came back home, he found no food but a lot of boxes by the doo. Sick of being taken for granted, Mi-Sook and Soo Ho got into a fight, as she told him she is going to live for herself now. She went to Young Eun’s house with all the stuff she got for herself. As Young Eun asked about what’s happening, she told her about wanting to be free from everything. Still not telling her about cancer.

Thinking about starting her chemotherapy and having no one to lean on, she turned to the internet and read what other people going through the same had to say. Looking at her staying late at night, Soo Ho started fighting with her asking her about what was going on. Thinking that she lost money in stocks, he just kept on making assumptions. And Mi Sook didn’t bother to explain and went to see her daughter, crying her eyes out.

Getting a call from Mi Sook and getting know that she was in pain, she called Su Hoo, but he declined her call. Running straight to her house, she found her passed out in the bathroom. As she gained her senses in the hospital, she saw Young Eun and Su Hoo by her bed. As he asked her about the doctors, both of them broke down. While Young Eun went out to talk to Jae Guk. As she sent him a voice mail, talking about how her day went. And how angry she is that her friend was suffering through the pain while she had no idea about it. Reaching home, she found Jae Guk waiting for her in front of her building.

“Now We’re Breaking Up” Episode 9 Release Date, Where To Watch, and Predictions

“Now We’re Breaking Up” Episode 9 will release on December 10, 2021. Seeing the devastating health and of Mi-Sook, Young Eun is encouraging her best friend for the chemotherapy. But Mi-Sook told her how she didn’t want to be sick for her daughter. Telling her that she is ready to take care of her daughter, Young Eun told her to do anything that can help her live another day. While Jae Guk’s mother is still in shock hearing about Ha Young Eun, now she wants to meet her.

Calling her Soo Wan’s mother, she asked Young Eun to see her. But Young Eun went on to decline her offer and told her to meet her as Jae Guk’s mom. On the other side, Young Eun’s father has been boding with Jae Guk. While her mother has been suspicious of her husband as he’s been talking to Mr. Wit and smiling like crazy. Clearing all the misunderstandings, Young Eun’s parents might get to meet Mr. Wit for real. As all of this happens, Yoo Jung might have to look for a new plan to bring Young Eun down. As kicking SONO out of her mall might’ve backfired at her. With SONO getting a popup store in Paris and rejecting The Hills. The domestic brand is heading for some good rebranding.

“Now We’re Breaking Up” Episode 9 will be available to watch on the streaming platforms like Rakuten Viki and Viu.

Also Read: ‘Our Beloved Summer’ Episode 1: What will Happen when Gook Yeon Soo and Choi Woong Meet after their Breakup?