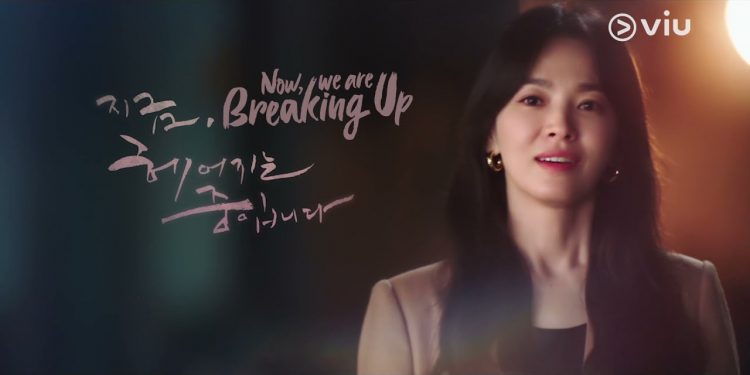 Viewers are waiting for ‘Now, We’re Breaking Up’ Episode 13 as the tables have turned now. No matter how much love he has for Young Eun, Jae Guk can’t seem to be with her without thinking about his brother. Even though his mother is finally letting go of Soo Wan, it is now him who can’t seem to stop thinking about him. Thinking of running away and leaving everything behind, Jae Guk asked Young Eun if she would like to move to Paris with him. Already looking at the places for them to live at. Leaving all the problems behind seemed like the best option to him.

But with Young Eun’s parents are on the verge of divorce. Rumors about the company she works for, getting sold are out, and her team is falling out. Young Eun couldn’t just leave her life and her people behind. No matter how much she loved Jae Guk. Reading up the letters her mother wrote about why she wants a divorce. It broke her heart as Jeong Ja told her that all these years, her only identity had been a housewife or a mother. While her mother is not wrong from her side, looking at her father, who is devastated too, Young Eun is torn between her life.

With ‘The One’ falling apart slowly, the employees were already looking for jobs at other places. While Young Eun waited for La Fayere to update them about the designs, looking at no contact from the other end, Young Eun took matters into her own hands. Thus, proposing the idea that they should do an online show for the potential buyers. Agreeing with her, Kwang Soo went on to give the approval to spend whatever to want to. But when CEO Hwang told them that the company was getting an investment, everybody came running back to work. While Kwang Soo tried to get his approval back, it was already too late.

On the other side, Soo Ho’s mother came home to see her cooking and Mi Sook sleeping. Having no idea about Mi Sook’s health, her mother-in-law went on to humiliate her. But taking her stand, Mi Sook defended herself and asked her mother-in-law not to interfere between the two. As Soo Ho talked to Chi Sook and Young Eun, he finally decided to get back to work. With the live telecast of the fashion show in progress, Jae Guk, Do Hoon, and Soo Ho got to work. While Young Eun and Chi Sook looked over the new collection and prepared Mi Sook to walk the ramp, the fashion show ended up becoming a huge success. And as soon as it ended, the buyers were already placing the orders.

‘Now, We’re Breaking Up’ Episode 13 Release Date & What To Expect?

‘Now, We’re Breaking Up’ Episode 13 will release on December 25, 2021. While managing yet another problem, Young Eun was determined to save her relationship. Jae Guk seems to be having second thoughts about their relationship now. Visiting his brother’s grave and letting all the things he had in his heart out, Jae Guk has promised his brother that he will break up will Young Eun soon. Even though Yoo Jung has apparently backed out and told him to take care and not let Young Eun go. Asking Soo Wan and his mother for just one more month, Jae Guk wants to do everything he can. And love Young Eun as much as he can.

While on the other side, CEO Hwang seems to approve of Do Hoon dating Chi Sook. Looking at him talking about the value of the company and the importance of being a good leader, he talked some sense into the Hwang Siblings. Chi Sook is happy too, but looking at other employees hitting on her boyfriend is bothering her a lot. While the employees of ‘Vision PR’ have gotten a good offer, making Do Hoon offer which is trying to steal his company and gems.

Where To Watch ‘Now, We’re Breaking Up’?

‘Now, We’re Breaking Up’ Episode 13 will be available to watch on streaming platforms like Rakuten Viki and Viu.

Also Read: Jae Kyung Is Scared That Her Father Will Find Out Her Secret In ‘The Second Husband’ Episode 93